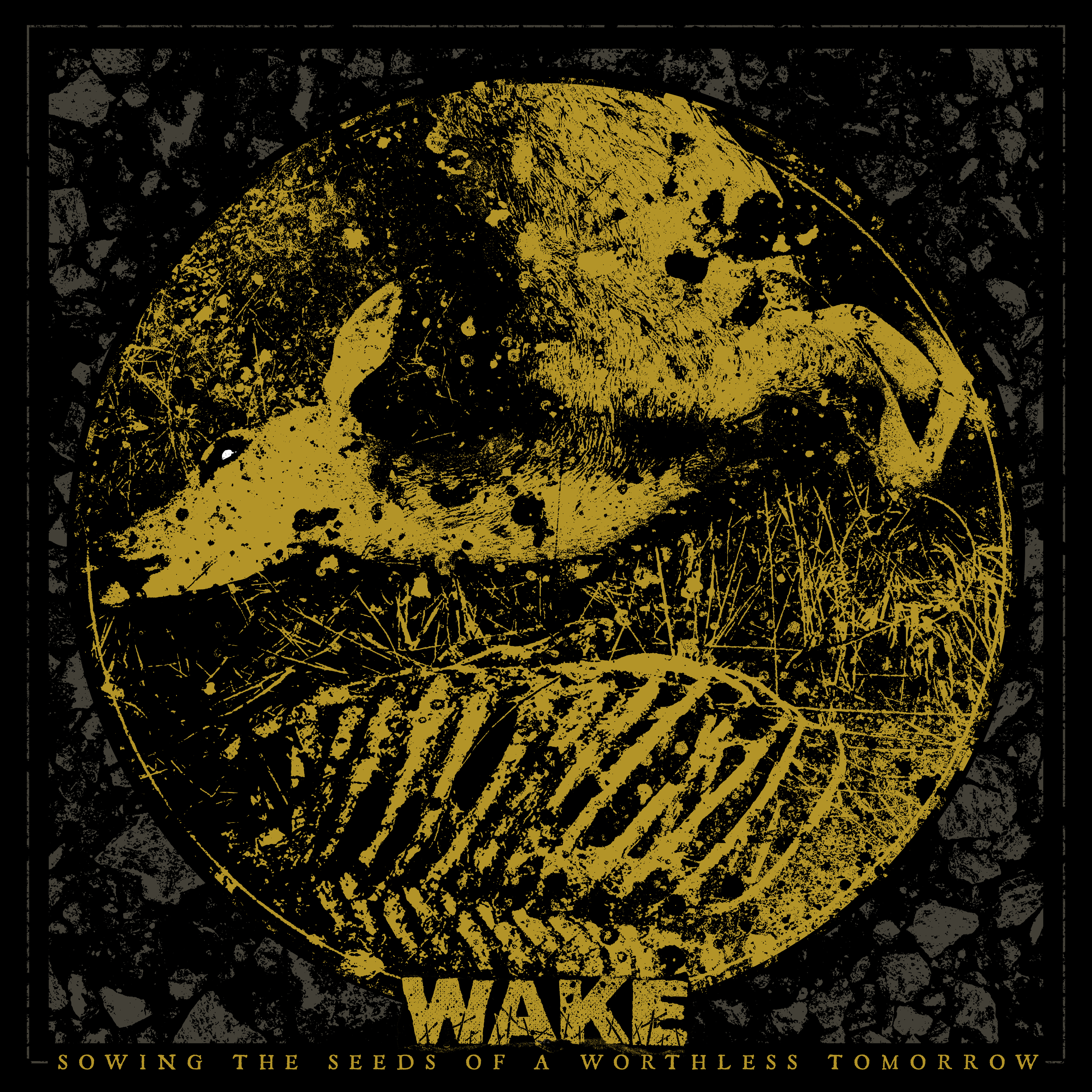 The cover of 'Sowing The Seeds Of A Worthless Tomorrow' The album was released on February 26th, 2016, through Sentient Ruin Laboratories for a cassette release, Nerve Altar for a United States vinyl release, 7 Degrees Records for a European vinyl release, and EveryDay Hate for a CD release. We here at CVLT Nation streamed a track called “Low” back in the beginning of February and what Sean said couldn’t have been more accurate to describe this incredible band:

”Far from simply being a grindcore band, over the years WAKE has evolved to become a maelstrom of wrecking sonic destruction, drawing life from many different influences and incorporating in their ferocious sound and ghastly striations of black metal, crust, post-hardcore and sludge, creating something that defies categorizations and makes trying to fully understand the sheer tonnage of this band’s brute force absolutely futile.” The cover of ‘Sowing The Seeds Of A Worthless Tomorrow‘

“Burn Well” is the beginning of Sowing The Seeds Of A Worthless Tomorrow and should only really be seen as a mighty opener. As a first impression for many due to it being the lead single as well as the first track on the album it draws a whole new mighty circle in the sand of grindcore’s abilities and diversities. An ominous, borderline ambient intro I would not be shocked to find out was a Sunn O))) line sample transforms into a gaggle of instruments fighting for dominance in a cymbal-crashing, drum-slamming (I’m positive that I would break a copious amount of heads and an obscene amount of sticks if I was recording this), and guitar-swishing rampage. The five-piece hang the music from its heels and bleed the fucking thing into a oblivion of whimpering feedback. The ease of dying cries of amp speakers doesn’t last long before “Wretched Tongues” beats the living shit out of the bleeding corpse of innocent sound and all who are left listening. It’s an isolation-less march of tidal waves of sound and fury with small little pin pricks of cymbal bell hits all sprinkled into a meat grinder and spun the fuck out.

The lack of isolation is remedied in the next track “Drones” by beginning with a singled out drum solo with a burning bass riff slowly catching the track on fire as the flames slowly lick and drip down into Kyle’s vocals angrily spitting embers at the sky before spiraling into blaze. The riff and solo tizzies into a riff that ascends the grindcore barrier and goes into a different established land I like to call metal versatility. This means that this riff could be utilized in anything from hard rock radio bands to dad metal to death metal to nu-metal (looking at you, Code Orange) and I swear that I would fall in love with it every god damned time. Dashes of more solos and clashes come to the glowing light of this fire and create a filthy song I would love to pit to sometime. A d-beat breaks this pit crusade and separates the tracks into halves by introducing “Better Living In Apathy” and piercing a dirty punk beat over a clean guitar pluck. The vocals seem slightly more distorted in this than on the rest of the album and, while not quite as relentlessly heavy, this song proves itself as a bonafide banger with that last breakdown.

“It never dies to pave the way for your worthless life.” It overflows into “Low,” a clean-guitar laden wraith that appears easy and at bay before tearing all semblances of reality and docility to shreds. Violent vocal overlays make the breaks in this track the strongest on the album in my honest opinion. This is the track that we got the privilege of premiering in February and it still impresses me each time I listen. It’s the longest song on Sowing The Seeds Of A Worthless Tomorrow and WAKE packs so very much into it in the forms of transitions and walls of genre-bending in just three and a half minutes that I can’t help but be in absolute awe of.

The impressing features of this album don’t end at “Low” though, no way. “Unrelenting Hate” is the next song and I can’t say too much that the main breakdown doesn’t say itself.

It’s hateful, furious, spear-headed grind that lays waste to clear for what the last two tracks have.
“Vultures” sounds like someone took the bled sound on the hook and started spinning it, WAKE in one corner, suffering in all four. It’s turning and undulating in and out of the focus of this lecherous onslaught, the only lust being for more carnage and blood. It plays seamlessly into a vocal sample that sounds the siren for “Endless Decay,” the closer of Sowing The Seeds Of A Worthless Tomorrow. A song with more buried vocals than the last track but still the same amount of projectile bile of hatred and putridity, “Endless Decay” does nothing short of properly end this album. I’ve surpassed my word limit, but if I were WAKE I would be more than proud to call this album my own. ORDER ‘Sowing The Seeds Of A Worthless Tomorrow‘ HERE: