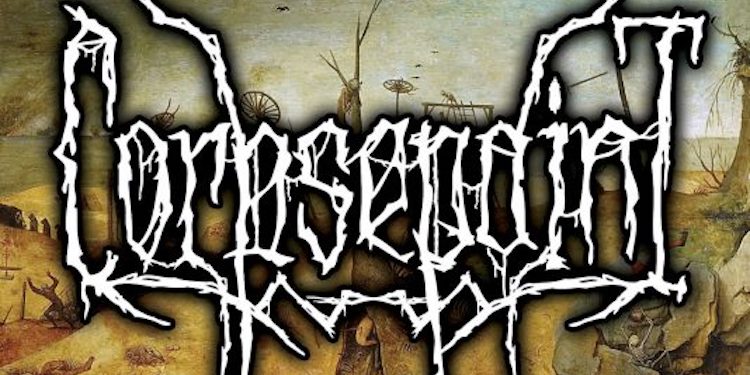 Black metal cannot be separated from its clichés. Church burnings, satan worship, misanthropia. That the treble-filled, lo-fi recordings can act not only to honor a malevolent deity bent on bringing about the end of the world, but the music can be a literal summoning of that dark force. Corpsepaint, a forthcoming novel by David Peak, utilizes these clichés by imagining that they can be literally true: that this music, in the right hands, can be a bastion of dark light heralding the end times.

The novel is a clever mashup of Lovecraftian literary horror and an obvious love and knowledge of black metal. It is told from multiple perspectives, but mainly follows an American black metal duo traveling to far-flung desolate woods in eastern Europe to record an album with a famed group of metal occultists. Max, known in the scene for spearheading the USBM movement under his alias Strigoi and his band Angelus Mortis, is a Blake Judd-esque characature: his first three albums are cited as cornerstones for the genre but after years of drug abuse, ripping off fans through un-fullfilled merch orders, and a series of subsequent albums that were unfavorably compared to original lo-fi basement recordings, he finds himself middle-aged, strung out, and known as being so difficult to work with it’s hard to assemble a backing band. Since one of the first things we see him do is almost choke his drummer-for-hire to death in a drug-fuelled black out, it’s hard to blame most of the world for distancing itself from him. The almost-strangled-drummer is himself a main character in the book. Roland is a young and naive ex-crust punk running from the mistakes of his past and hoping that joining Max for the recording of a new album will give him both a fresh start and lead to opportunities in the scene. We see Roland act as both a wide-eyed hanger’s-on and also Max’s only system of support as the two make their way (on their label’s dime) across the ocean and travel through Prague and then eventually meet up with their hosts in Ukraine. We are introduced to Seph, a resilient and steely-eyed woman who runs the compound in which Max and Roland are to record the new material. Seph and her band (the reclusive and otherwise anonymous cult act Wisdom of Silenus) seem at first to be drawn from myriad black metal caricatures of nothern-heritage-types who live outside of modern society and detest any form of invasive culture.

It is through Wisdom of Silenus, Seph, and the figures that sparsely populate the compound that Corpsepaint introduces its horrors, both realistic and cosmic. It’s easy to see straight away that things are heading in a vicious direction as soon and Max and Roland trek through icy and desolate woods in the middle of the night and find themselves miles from civilization on a compound built on the bones of an ancient castle. Here Peak works within the cliches of a classic horror tale: two foreigners are literally led off the beaten path into a strange and hostile environment with no way of calling for help. But he works the cliches against the reader’s expectations by amping things up at unexpected times and warping our notions of protagonist and antagonist.  Perhaps the thorniest thing about the book is that it is hard to not empathize a little with everyone even as you see them engage in self-destructive behavior, turn on one another, and even profess ideologies that you may find reprehensible. Peak understands that being a fan of black metal means constantly dealing with paradoxes, that some of the best music comes from some of the worst people.

Ultimately the novel delivers on its promise of exploring what would happen if the propositions of black metal came true; if the music could indeed be a summoning of dark gods and used as a literal weapon against modern society. It’s a harrowing experience to explore the ultimate extreme potentials of this music, and the novel conclusion mixes high fantasy with an all-too-possible climax that is genuinely disturbing. It’s a book that would satisfy any fan of horror and mythos fiction, but is especially rewarding for fans of black metal. There are many easter eggs of metal references throughout, and you can tell Peak is familiar with the material. If you live and breathe both black metal and literary horror, this book is a gift.

In this article:Corpsepaint, David Peak