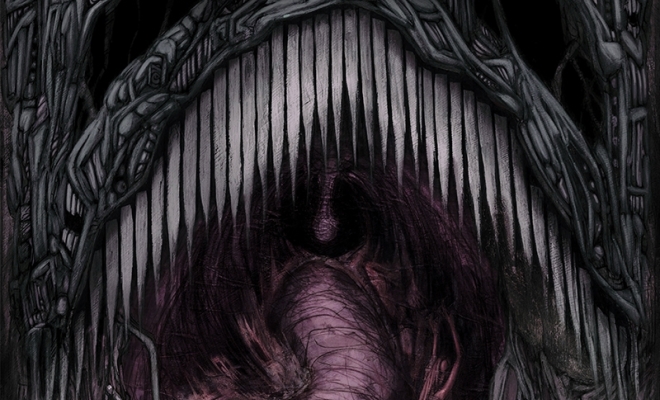 Like it or not, experimental metal exists, and there are bands with no interest in changing their approach to music in order to become what others want them to be. It gets even more frustrating for labels to see some of these acts like Bongripper grow, and not simply stop. I fucking love that. Having followed their releases since “Hippie Killer”, I was more than psyched to receive the promo for “Miserable”. The band hasn’t let down one single fan since their blastoff, and that is decisively because they are completely on their own. No one to take orders from; no one to obey. Further, it becomes fundamentally overt when you see the tracklisting for this year’s “Miserable” — three tracks, over one hour of music. Like the enormous hellmouth depicted in M.G. Miller’s cover art, the music of Bongripper on “Miserable” exceeds, torments and absorbs. The notorious quartet have left no stone unturned in their atrocious pilgrimage as yet; “Hate Ashbury” and “The Great Barrier Reefer” both were stabs at encapsulating the timeless, morphing drone doom into a whole, a mega factor; while the band conclusively dug into the rayless principalities of noise, psychedelia and ambient with “Heroin”; and with “Hippie Killer” and “Satan Worshipping Doom”, a counterpoise was sought. On that account, “Miserable” can be translated into the evil twin of “Heroin”. Here also, the aggregate is not violated, though the riff outlasts all other elements — and not noise. Mammoth riffs wolf one another down and sculpture a sonic citadel retrospecting “Extra-Capsular Extraction” era Earth, Sourvein, Noothgrush, Zeni Geva and even Meatjack.

Despite having occasionally sung in past, as in Consent’s “Conception”, guitarist Nick Dellacroce and bassist Ron Petzke, in addition to the rest of their teammates, remain silent throughout “Miserable”, and the sound of Bongripper is as instrumental as before. Instrumental, I think, defines their outlook withal — every single riff has to be in the clutch of the entire song to be effective instrumental. That is to say, within Bongripper’s compositions things remain largely autocratic. Not exactly in the way that popular music is, since with Bongripper we indeed do not face a verse/chorus structure most of the time, and the songs have the dynamic earmark which makes them even more opposed to any trend of that kind. If so, then what could possibly make Bongripper’s songwriting autocratic? To answer that question, I’ll have to make mention of the now well-known interview between Wim Mertens and John Cage that happened in 1982, in Chicago — quite a coincidence to know Bongripper are also from Chicago — regarding the Glenn Branca piece ‘Indeterminate Activity of Resultant Masses’. In the infamous interview, Cage makes remarks about Branca and his music which are unenthusiastic, to say how they’ve been interpreted so far. But there is something gripping in Cage’s perspective, that if one transcends the human factor about the whole situation, it might lead to recognition of some lost truth.

Cage found the composition/composer fascistic/fascist in the sense that the listener was forced to participate in what he believed was “an intense thing”. It is vital to note that his point didn’t have anything to do with the overall loudness of the piece, as he himself made it clear in the interview, so the “intense thing” he later mentions seems to be far from what he was talking about. The Branca piece is precisely what Cage escaped his entire career: the lack of freedom within the song structure, the absolute, determined ‘composition’. Let’s take Bongripper’s recent records for instance. Since “Satan Worshipping Doom”, most of their songs avoided the noise and stuck to the riffage. But weren’t those also brilliant? And is such comparison valid? To compare “Heroin” with “Satan Worshipping Doom” or to compare Branca with Cage — what I believe what Cage was doing was — is the old case of apples and oranges; I sure as hell enjoy “The Process Of Weeding Out”, but I enjoy “Loose Nut”, too. Therefore, yes, the fascistic element is there; and it is the chief constituent of the final music enjoyed — not something to escape. There are not many metallers out there who dare to traverse beyond their pre-defined, tiny territory of ‘metal’. And by that I do not mean checking out hip hop or pop albums, because if that were the case, there are in fact too many of those people. This is about a number of my encounters with Bongripper through the medium of social media. As it appears, they are into anything from King Crimson to Grinderman, and it’s remarkable to see they don’t use any of those names as a cover-up for their piece-of-shit music: e.g. Porcupine Tree, Opeth.

Bands like Bongripper manifest a brighter future for metal, and they are to be supported by fans so that there will be no need for this rotten protocol ‘record label’.

Grab yourself the CD version of “Miserable” here.