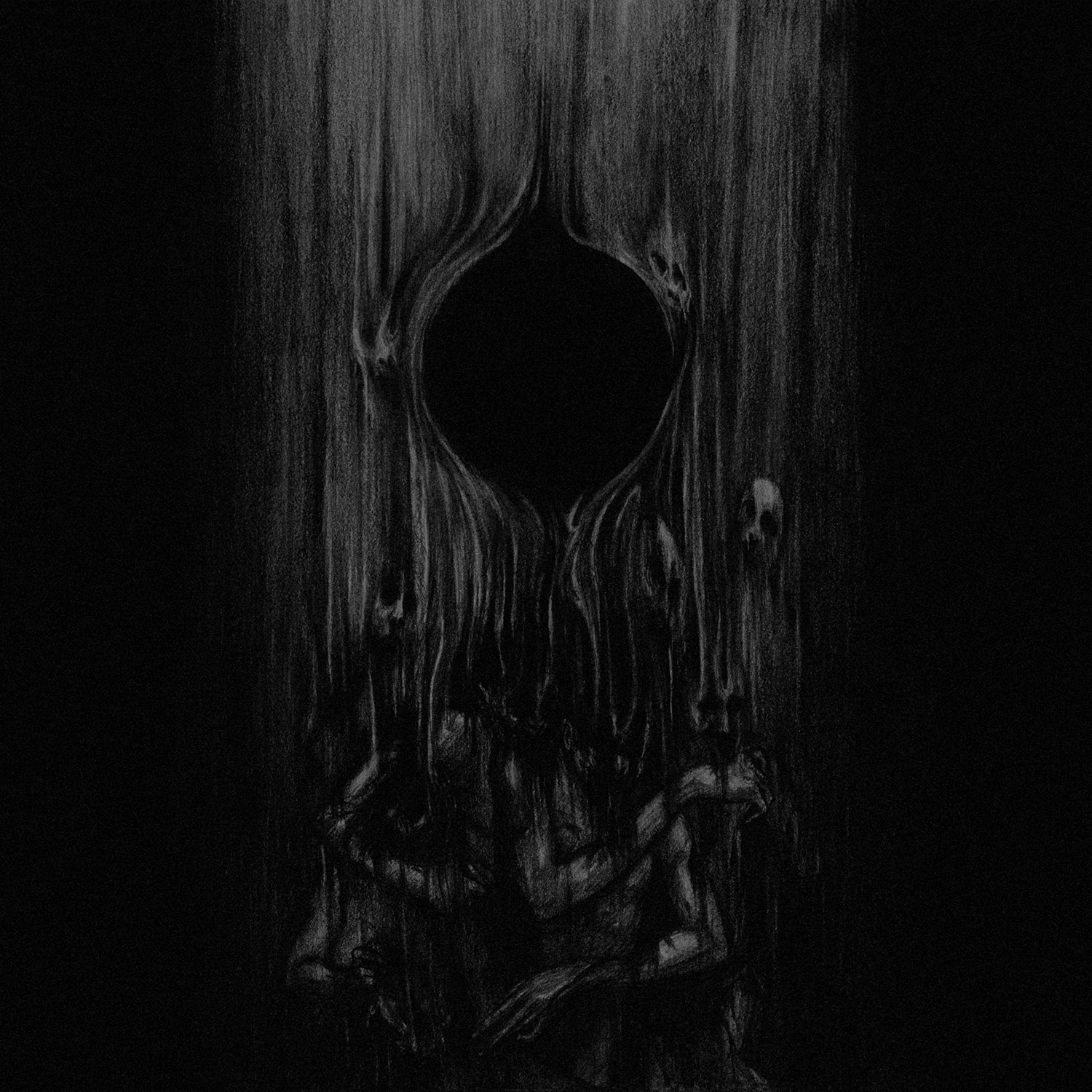 The cover for 'Eternal Downfall' done by Stephen Wilson

Okay CVLT Nation fans, friends and family, time to take a seat for what is surely going to be a highlight in your music/audio consumption of early 2016. Relentless, primal, furious, and yes, bestial (as stated in our premiere of the first track “No Beyond” a few weeks back) are just a few words that can be used to describe the monstrously ravaging force of Atrament’s new album Eternal Downfall. Members Mattia Alagna, James Meyer, Sam Carr-Prindle, and Chad Gailey are not unfamiliar with the spread of heavy music either, coming from other slaying acts Moral Void, Necrot, Abstracter, Vastum, and (a personal favorite) Black September. They all made the executive decision to personally coagulate and create an Oakland, California reaper beyond definition we have come to know as Atrament. Calling Atrament simply a powerhouse would be a near criminal injustice, because they’re more like the entire grid, or a country-wide power source, or maybe even the fucking sun. They’re hard as a hydroelectric dam and as hot as what I presume hell itself is. Sharing some of the same D-Beat drum techniques that Moral Void has seen, the speedy riffs of Necrot and Moral Void, crusty dissonance, a distinctively newer deep vocal range that hasn’t been nearly as showcased in Mattia’s other band, Abstracter, which may be the result of him pushing himself into new depths which has me incredibly impressed. Noisy aesthetics are passed on from Black September and Abstracter, and then a splash of crust that is gritty and completely Atrament’s own. Short songs with beautifully disgusting lyrical content, and the unsheathed rusty guitar tones that go hand-in-hand with the harsh vocal tone Mattia gives so graciously that is done solely, I believe, for the purpose of bringing me immense pleasure.

March 4th, 2016 is when this thirty-two minute long harrowing creature will be distributed for a worldwide attack on speakers thanks to tape and digital distributor, Sentient Ruin, United States vinyl distributor, Broken Limbs, and European vinyl distributor, Argento Records. That’s a long time to wait, right? Especially when you want aural devastation suitable to follow up “No Beyond,” right? Well, you’re in luck. All of us clever bastards at CVLT Nation partnered with Atrament to give you a private stream of all the desolate death-influenced crust Eternal Downfall has to offer in its eleven tracks. Each track has its own balance and never even once relents from its assault on music as a whole in the entire span of its recorded menace, but there are a few that really ended up standing out to me on the album. Going in inverse order from third favorite to second favorite to my first favorite, the third favorite is “Rotten Twilight” with its numbingly violent bass solo beginning and those seemingly phlegm-ridden spews of words that really channel my favorite things about crust music as a whole, even more so dark crust. A solid second place is “World of Ash.” The powerful drum fills and cymbal slaughter make me enjoy the song almost to the point of wanting to mosh, which is very rare for me. It has something about it that just hits me in the correct way and it’s a really impressive track. Then my absolute favorite on the album is “Circle of Wolves.” It stands out to me so much because it makes me want to break out some black and white face paint due to the purely black metal vocals over a seriously sick crust punk beat. It’s literally just so perfect to me because of this blend and I hope you enjoy it as much as I do. The cover for ‘Eternal Downfall‘ done by Stephen Wilson

The blend of blackened crust that Atrament seem happy (as happy as a blackened crust band can be) to give to us is a really great one, with a clean guitar solo as the final topping on this sinkhole of angst and despair. A dying fade out into a feedback soliloquy that’s eerily, elegantly like a lullaby or generationally passed down hymn in “Dusk Abuse” is what closes out the album for good. Eternal Downfall is a honed modern classic in both areas of black metal and crust because it juggles both to such a fine degree that I couldn’t see it as anything short of greatness. I am happy enough to be preordering it on cassette and hopefully getting myself a shirt, which you can do both of here:
Bandcamp Merch

Also, stay on the watch of Broken Limbs (US Vinyl), Argento Recordings (EU Vinyl), and Sentient Ruin Laboratories (Tape/Digital) for the preorders and releases! Let me know what you think, and be sure to give Atrament all the love your black hearts can muster up at the following links:
Facebook
Bandcamp

ALSO, if you’re even remotely in the area, I am absolutely certain you won’t want to miss this absolute banger of a release show for Atrament, featuring other artists Acephalix (they’re finally becoming active again hopefully!!) and Deathgrave.