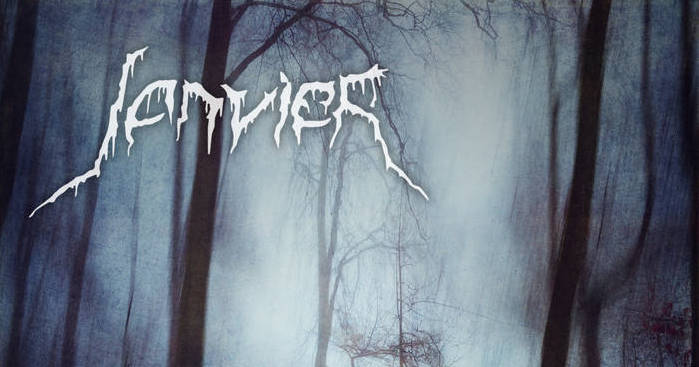 The Black Metal scene from the province of Québec is quite active. I have made my own Fanzine, Les Temps Sombre, which sold out only after a few days. I was lucky to talk to a bunch of exceptional bands, I believe that it would be great to share in this series of articles what they had to say. Janvier just came out with a new album. They bring something unique with their first self-titled work. They bring out the specific black metal aspects of the French-Canadian province – they sing in French, they talk about the environment that surrounds them and are inspired by the local folk tales.

Janvier means January in French, and the band puts lot of focus on the harsh winters of their home province. They make sure that you feel cold when you listen to it. Throughout the album,

you hear the wind blowing. Taciturne takes care of all the instruments, he told me that it was a long process for him to come up with this album. It was a challenge on the technical side since he doesn’t feel comfortable with computers and matching two guitars can be adventurous.  It was also hard for him to let go of the songs, he describes himself as a perfectionist and he did tons of mixing to get to the final result.

Kanibaal is the singer in this duo. He arrived on the project, when Taciturne was well into the recording of his songs. With his lyrics, he brings a dark and violent universe. This album is like a story with four parts. The main character has to go on a journey through a horrific winter.  Evil exists, but only comes to the protagonist through the pain that he has to suffer, the torment is lurking and shapes itself in order to take over the body of the victim. Taciturne told me that he is born in January and it was a freezing, stormy day, it was for him the natural influence for his project. He added that the name also had to sound black metal from the start, and since this the darkest month of the year, the name of the band had to be Janvier. Kanibaal told me that for him, winter is a source of energy, it’s also a time of solitude and calm. Most people don’t like the season and prefer to stay warm inside, but for Kanibaal and Taciturne winter is a source of inspiration.

Janvier’s new album is currently available – it is cold, the wind is strong and the snow storms are severe in their universe, the darkness and the tough environment is surrounding the listener. The duo has worked hard on this news album and they said that already, they have the concept for the next album. They didn’t tell me what the ideas will be about, but we’ll have to be patient, because they want to take their time like they did the first time – they only mentioned that they want to focus on the imagery on their future release. They are also working on a demo that is more old school and raw. Kanibaal has his own project, Wounded Funeral.