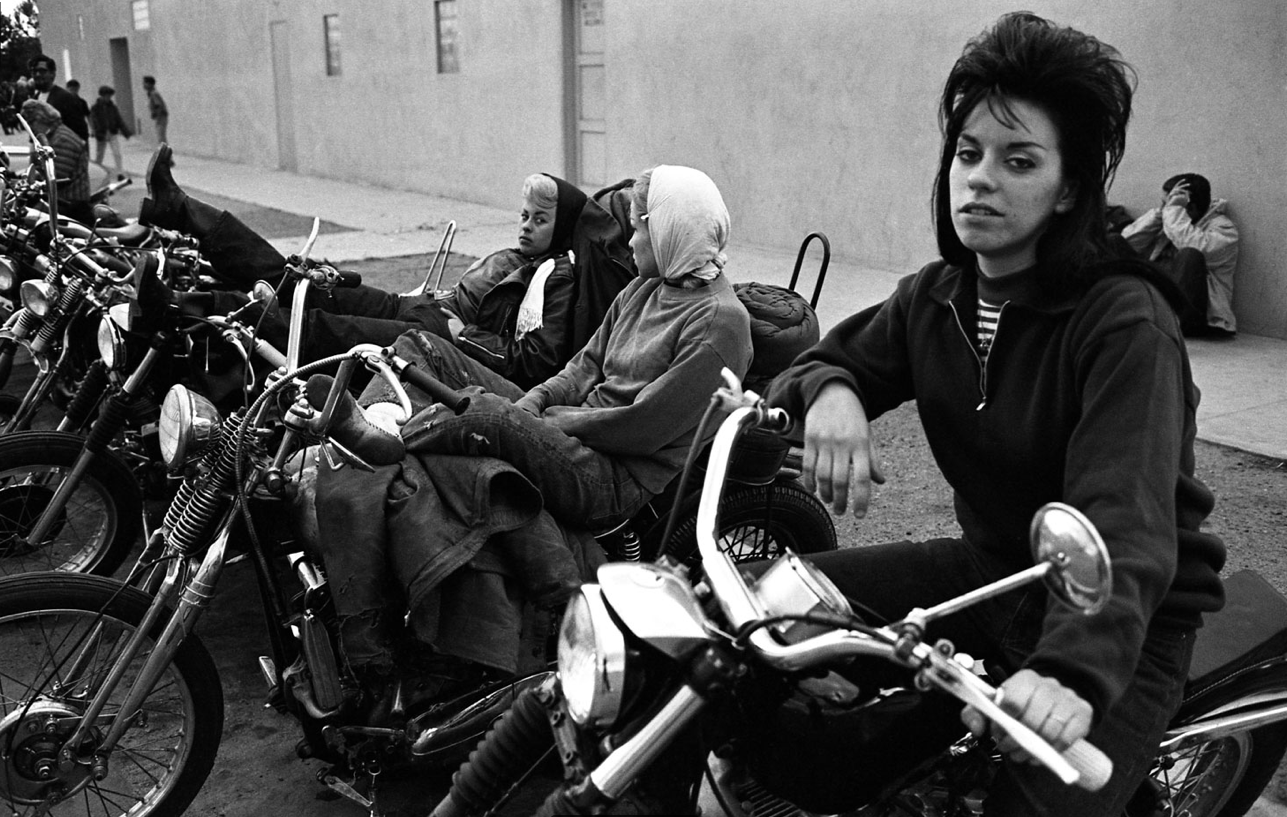 Text via Another mag

As Irish Rich correctly said, “Bill Ray wasn’t the Lone Ranger…”meaning he wasn’t the only dude photographing the ’60s bikers/hippies/counterculture in a meaningful way – share the love.That being said, he did capture some really stunning images of the original Hells Angels of Berdoo and their striking “Old Ladies” for LIFE back in 1965. It is the Old Ladies (actually quite young), who in fact steal the show with their melancholy beauty and faraway stares. They hold me mesmerized as I search in vain for silent clues to who they were, where they came from, what brought them here. Truth is that there beauty is long gone by now, and they may have even left this world – yet somehow looking at these images they seem like ghostly beauties frozen forever in a place in my mind where time feels irrelevant. If I could only find a way back there. Truth is these Old Ladies are no longer available on the menu. Thank God (oh, and Bill Ray) for these images.

I love the personal commentary Ray shares regarding some of his favorite shots, and the behind-the-scenes escapades while out on assignment with writer Joe Bride covering the San Bernardino Hells Angels. The story for LIFE would never see print as it turns out, but the shots have become legendary despite that and are available in the book Hells Angels of San Berdoo ’65 | Inside the Mother Charter which is definitely worth a look. But don’t stare at the old ladies too long. They will lure you into the deep, dark waters and drown you. Two of the women riding with the Hells Angels hang out at a bar. According to LIFE writer Joe Bride’s notes– “The girl kneeling by the jukebox is Ruthie and she’s the ‘Old Lady’ of Harvey, a Diablos member from San Bernardino. Harvey attends Angels’ meetings and rides with them but is not a member. It’s only two in the afternoon but Ruthie has already ‘crashed’ from beer and bennies [benzedrine].” Bill Ray has a real liking for this particular photograph. “This is one of my favorites from the whole shoot. There’s something kind of sad and at the same time defiant about the atmosphere. Ruthie is probably playing the same 45 over and over and over again. A real music lover.” –photograph by Bill Ray © Time & Life Pictures/Getty Images “Outside the Blackboard in Bakersfield, Hells Angels, hangers-on, and their old ladies conduct a seminar in advanced loafing.” –photograph by Bill Ray © Time & Life Pictures/Getty Images “I remember seeing some of the women take a razor blade and trim their eyebrows, and a lot of them managed to achieve this very hard, distinctive look. It’s a look that’s difficult to recreate, I think, and one that, when you look at these pictures, is really of its time. This look says mid-1960s. That’s what I see here, without a doubt.” –photograph by Bill Ray © Time & Life Pictures/Getty Images “One thing about the Angels that I found fascinating,” Ray told LIFE, “and something I’d never given much thought to before I started photographing them, was the role that the women played. The girls weren’t there in chains, or against their will or anything. They had to want that life if they were going to be accepted by the Angels. These guys were kings of the road. I don’t think they ever felt they had to look around for girls. Girls would come to them, and they would take their pick. And then they’d tell them where to sit and what to do.” –photograph by Bill Ray © Time & Life Pictures/Getty Images Bill Ray definitely has a few of his own favorite pictures from his time with the Berdoo Hells Angels. “One is the picture of Ruthie at the jukebox. Another is this photo taken outside the bar as the sun sinks, with the old lady leaning back on the bike, smoking a cigarette. The light, the shadows, the gleaming gas tanks, the texture of the bike seat in the foreground — I admit it. I like this picture a lot.” –photograph by Bill Ray © Time & Life Pictures/Getty Images “Buzzard, one of the original San Berdoo Hells Angels, flashes by as his Old Lady flips me the bird, probably the one gesture that sums up the attitude and contempt the Angels had for the outside world.” –Hells Angel Salute, 1965. ”There’s a romance to the idea of the biker on the open road. It’s similar to the romance that people attach to cowboys and the West — which, of course, is totally out of proportion to the reality of riding fences and punching cows. But no doubt, there’s something impressive about these Harley-Davidsons and bikers heading down the highway. You see the myth played out in movies, like Easy Rider, which came out a few years after I photographed the Angels — you know, the trail never ends for the cowboy, and the open road never ends for the Angels. They just ride. Where they’re going hardly matters. It’s not an easy life. But it’s what they choose. It’s theirs. And everyone else can get out of the way or go to hell.” –photograph by Bill Ray © Time & Life Pictures/Getty Images A group of old ladies — including one with what appears to be a bandaged, broken nose — hang out in a bar while the Angels gather in a separate room. “The men were having a business meeting and the women were definitely not invited there. When those guys were busy, the women just sat and waited. They’d smoke, drink beer, gossip, but they were pretty much just on ice until the meeting broke up. I remember, too, that many of them were surprisingly young: teenagers, or in their early twenties. They didn’t look young, though. Riding around on the back of a Harley at a hundred miles an hour in all sorts of weather will age you, I guess.” –photograph by Bill Ray © Time & Life Pictures/Getty Images Bill Ray (with camera), Bakersfield, California, 1965. “I got along with the Angels. I got to like some of them very much, and I think they liked me. I accepted them as they were, and they accepted me. You know, by their standards, I looked pretty funny. Just look at this picture — I can’t believe I looked like that, either. That’s some kind of a plaid shirt I’ve got on,” he says, incredulity mixing with amusement, “but that was the best I could do to try to fit in!” Bill Ray spent a month with the original San Berdoo Hells Angels in 1965, hanging out at their clubhouse, shooting photos, shooting pool, drinking beer– and when an Angel split his head open, taking him to the ER. –photograph by Bill Ray © Time & Life Pictures/Getty Images “Night has fallen on Bakersfield, and the Hells Angels continue to talk and drink, inside and outside the Black Board cAFE. i made this extraordinary shot with the existing street light from the corner lamp without a tripod. I held my breath and the Leica M S fast to the handlebars of a Harley for the long exposure. To me it looks like a film set lit by the Hollywood great, James Wong Howe.” –photograph by Bill Ray © Time & Life Pictures/Getty Images