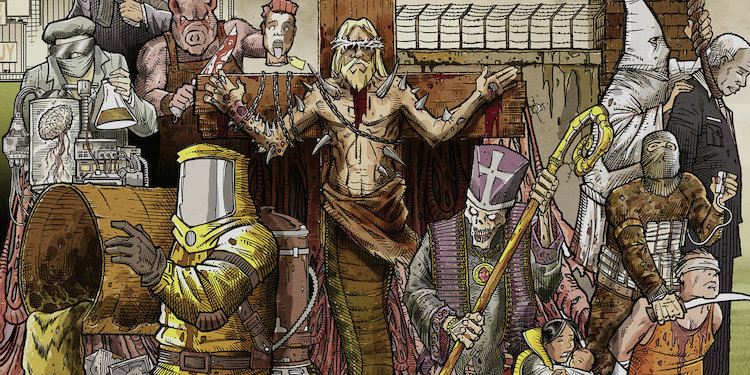 When I listen to grindcore like BESTA’s track “Neoselvagens” off their 2019 release Eterno Rancor via Lifeforce Records, I sometimes wish it could come to life to complete its mission on earth. Hit play on our exclusive video premiere below, and imagine that the razor sharp vocals and gnashing riffs from this Lisbon, Portugal-based band become a sentient being full of blistering rage that has one mission, and one mission only: to maim and destroy the power-hungry, sociopathic authorities of this world. It becomes a massive beast with sword-like claws that will shred the skin from Jeff Bezos and flay every inhabitant of the Vatican alive. Wouldn’t that be sweet? If you woke up to the bloody impaled heads of all pharmaceutical company CEOs lining Wall Street? If property developers were all murdered in their sleep by this supernatural force? If every police station became a bloodbath and not one squealing piggie was left alive? OK clearly Besta is triggering my deep loathing of abusers; thankfully this track is very short otherwise I might end up hurting someone. If the bullshit in the world is something you’re also frustrated by, then you can pick up a copy of Eterno Rancor here. Right now, watch BESTA grind your frustrations away below!