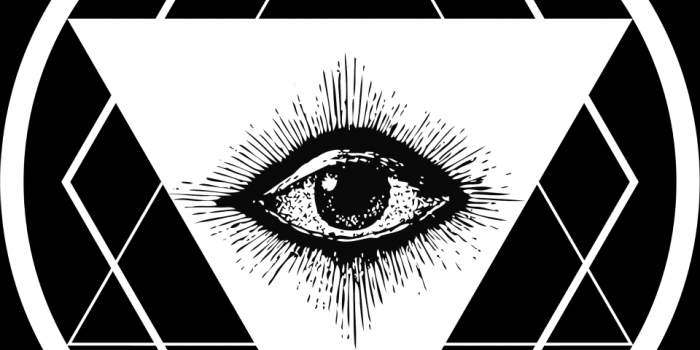 The Secret Light are one of Portland’s hidden gems among the slew of endless goth bands it consistently breeds. Featuring members of The Xploding Boys, they have an experienced electronic sound to them. I recently had the privilege of experiencing them live at Dave Cantrell’s Songs From Under the Floorboard Showcase #2 in November 2016, where they played with The Prids and Sex Park. I was completely blown away by these guys. I actually saw vocalist Viktor’s previous synthpop band Pink Noise back in 2011. Without further ado, let’s get into this beautiful album.

“Circuits Collide” has a sentimental mood about it, especially lyrically, but it remains upbeat and danceable not unlike a New Order song. In fact, the bass line is very reminiscent of New Order as well. It really sounds like it’s coming to you straight from the 80s. The synth is particularly catchy, especially about halfway through. It’s the type of song you don’t want to end, which is fitting as it’s nearly 6 minutes long. Gratefully, every song on Mirror Mirror has a satisfying length to it.

“Clockwork” opens up with atmospheric guitar and beeping synths, evolving into a masterpiece of new wave goodness. If you’re into Depeche Mode, you’ll love this track specifically – Viktor is throwing out major Dave Gahan vibes to the point where you could almost mistake this for a DM song if they didn’t have their own flavor to them. At this point, I should stress that while Viktor himself has a prominent stage presence, the music is not driven completely by his vocals, but rather they compliment each other. You can be dancing to their music without vocals for several minutes, and when they chime back in, it’s not intrusive in the slightest. “Mirror Mirror” is the only track that was previously available to listen to and download off the Bandcamp page earlier last year. I might be slightly biased toward this song because I was able to hear it before I even saw them live, but this is my favorite on the album. The synths are dreamy, the guitar reminds me of the guitar in New Order’s Power, Corruption, and Lies, and the vocals are both catchy and sad. This is the one track I’d play for someone who wants to get a good feel for their music, because it encapsulates their sound perfectly.

The next track is actually an unassuming cover of Clan of Xymox’s “Back Door,” the closing track on their second album, Medusa. Viktor Nova once again proves to be great at vocal mimicry, as you almost can’t differentiate his voice from Ronny Moorings’. The Secret Light really bring their own touch of synthpop flavor to this song; it’s easily one of the best Clan of Xymox covers I’ve ever heard. “Endless Loop” starts off with a bass riff reminiscent of Joy Division before the other instruments chime in. This one is a little more upbeat than the previous tracks. Viktor’s vocals are deep, dark, and echoing over different fun synth effects. It actually sort of sounds like what I would call moody video game music, and it’s one of the most danceable on the album. I can easily imagine hearing this one being played in barcades regularly.

“Posthuman” opens with creepy, surreal audio of a man counting down, followed by a slow beat. This is one of the most danceable tracks on Mirror Mirror (which is saying something, because they’re all beyond danceable), and it leans slightly more on the darkwave side than synthpop. It feels like a journey from beginning to end, female vocals chiming in beautifully at the last minute. You can purchase their album on Bandcamp, but it’s also available on Amazon, iTunes, Spotify, Google, and more. Be sure to follow them on Facebook, especially if you’re local and want to catch a show! Their record release show was in December, but they’ll be supporting The Prids for their record release show at Doug Fir Lounge on February 3rd.