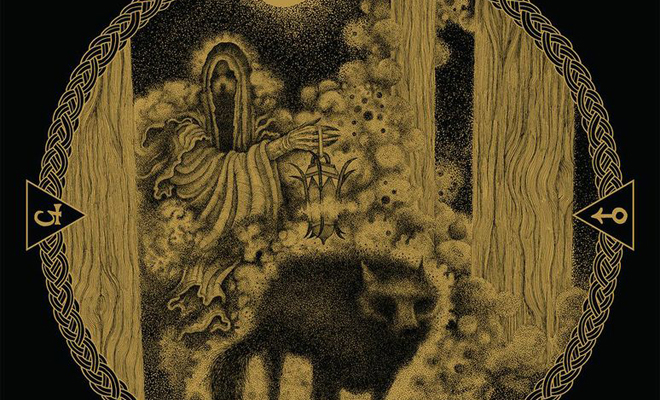 In 2012, Bastard Sapling’s first full-length Dragged From Our Restless Trance exploded into being, with a cohesive, intricate take on black metal that took equally from the genre’s frigid, morose Scandinavian forebears and the sprawling, epic might of contemporary black metal. But for as much as Dragged was an orthodox black metal record, Bastard Sapling – which features current and former members of Virginia post-metal outfit Inter Arma – nevertheless toyed with elements of atmosphere and ambiance that contrasted beautifully with the pummeling metal assault, creating a haunting, mesmerizing sound that was entirely the band’s own creation. This trend continues with the band’s newest album Instinct is Forever, the band’s Gilead Media debut and a deeper exploration of the limits of a USBM record.

This exploration comes in the form of a dearth of musical ideas that Bastard Sapling seamlessly integrates into the black metal framework laid down by their previous outings. Drew Goldi’s guitar is a versatile machine; whether he’s hunkering down with the rest of the band for a blast beats-n-tremolo section on ‘Splintering Ouroboros’, casting hypnotic spells in ‘The Opal Chamber’, or belting out an almost psychedelic solo on ‘The Killer In Us All’, Goldi’s guitar sings, twangs and soars through the record, sometimes acting as a distant counter to the band’s rhythm section who paint a harsh, stormy backdrop in the vein of traditional black metal.

Just as well, Instinct is Forever sees Bastard Sapling refining the atmospheric breaks they first experimented with two years ago, with the windswept, enigmatic fourth track ‘Elder’ being a prime example. But whereas in previous outings Bastard Sapling worked the atmospherics into the songs, Instinct is Forever has the band moving between the thrash-tinted metal theatrics they’ve been known for and extended post-rock or ambient-like breaks. ‘Elder’ sees scintillating guitars hum gracefully through a wall of gloom that recalls Inter Arma or Year of No Light’s calmer moments, and represents the band’s most experimental outing yet, lacking in drums but nevertheless just as heavy as the metal songs that precede and succeed it. On ‘Lantern At the End of Time’, Windhand vocalist Dorthia Cottrell lends her eerie alto to a ponderous, expansive pause as the distorted guitars slowly fade out to be replaced with clean-strummed chords. Commendably enough, the band moves between these starlit sections and straight-up black metal ruthlessness gracefully, which leads to the undeniable observation that the songwriting on Instinct is Forever is superb, building up tension in the listener before evoking a cathartic release of energy – usually in the form of a particularly abrasive metal section. The transition is never anything short of natural, and nine songs presented flow spontaneously, even, as on ‘Lantern At the End of Time’, the band abruptly ends its head-in-the-clouds atmospherics with a jarring blast beat. The strength of Instinct is Forever lies in its variety, both in terms of song structure and actual instrumentation – the record presents an elegant solution to some of the most common, but insurmountable problems modern black metal bands face. At once entrancing but simultaneously gritty and furious, Instinct is Forever represents Bastard Sapling’s most fascinating and unmissable release yet!

Instinct is Forever is due out July 18th via Gilead Media/Forcefield Records.