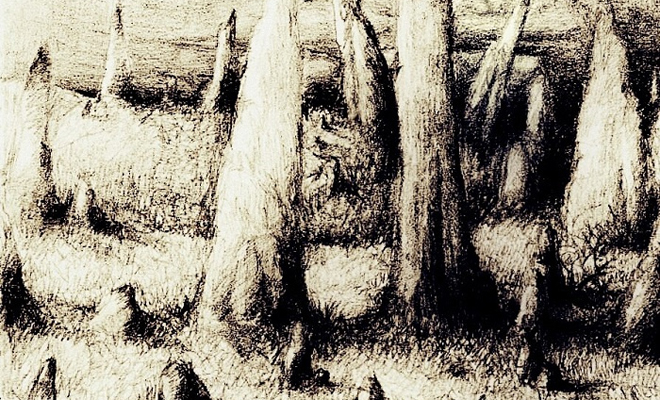 Black metal and neoclassical art are decades deep in a steamy love affair. As early as Burzum, black metal has been influenced by neoclassical music. This was ramped up in the late 90’s and early 2000’s, with groups like Windir, Morose and Limbonic Art. Balin’s Tomb from Moscow play a neo-classical inflected style of black metal that manages to be challenging and unique. Their third album, “Barrow-Downs” is their best record to date, a solid slab of archaic melodies wrapped up in raw production.

I think the best description for this album would be a black metal band playing live circa 1912, with one band member playing a haunted, broken piano as an instrument. Each track is one repetitive guitar melody with underlying ambient noises and some sort of piano melody. There are the occasional “metal” moments, “Gollum” is basically Raw Black Metal, but overall it sticks to the formula of tinny, guitar-based neoclassical. What’s unique about this album is the ambient outros that end every track. Every song is short, around three minutes, and each ends with the main melody cutting out, revealing the ambient noise hiding under the track. It sounds like this technique would get old, but because the outros are so short, you never feel cheated out of a full formed song. It adds a whole lot of character.

The production is hit or miss. For those that are not lo-fi inclined, it can be daunting. Even for me, a person that is not concerned about production, it can be a bit much. There are strange volume swells in a few songs. It can be aggravating, but after repeated listens it stops being an issue.

The art for this album is simply gorgeous. A sketch in sepia paper depicting what appears to be a tribe of people discovering teeth-like mountains. It fits the music.

This album is an oddity and it really deserves your listen. If you’re a fan of neo-folk, black metal or classical music in the style of Edvard Grieg, this is for you.

In this article:BALIN'S TOMB, barrows down