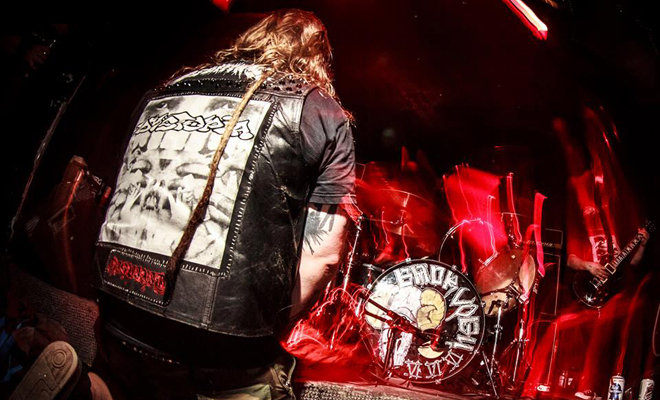 Bädr Vogu is a Sludge band from Oakland (((California))) that started out in 2010. Formed from the ashes of World Eater, Midnightmare and Hotblack Desiato, they have been crushing and garnering a loyal following throughout the underground since their inception. They have played some of the most killer shows I’ve seen, and fortunately, have been able to be a part of. Our bands have played together a bunch of times, and these are good friends that I really respect. The first show Swamp got to play in Oakland was opening up a garage show that Bädr Vogu played, alongside Galdr – the last show that we got to play with Bädr Vogu was alongside Eyehategod in San Jose. I support these guys and I am honored to debut their very first music video for their new single, “Anathema of Time,” directed by Drew Dorsey.

“Anathema of Time” is a track off their new recording, Agglomeration MMXIV. Salvador Raya (Asunder) recorded it at Earhammer Studios in Oakland (((California))). I am really excited to be able to share this release with everyone; the B-Side includes another heavy dose of headbangable Misanthropic Sludge that was previously only available on LP from their split with Wilt. Transylvanian Tapes is releasing physical copies of Agglomeration MMXIV that will be obtainable in July.

Here’s 7 Heavy questions with the band.

I have your first demo tape from 2011 – What other BV releases exist?

There is our full length album Exitium (also released in 2011) that so far has only seen two CD pressings (one self-funded, the other through the Spanish label Memento Mori), and our split vinyl LP with Seattle’s Wilt (released in late 2012) – that was a joint venture between Hermit Records and Abominate Records, both based out of Seattle. Aside from that, there is the new cassette tape being released on the Transylvanian Tapes label that will have two brand new songs on one side and our side of the split with Wilt on the other end of the tape.

What are your biggest influences as a band?

What does the band tune to?

We tune to B standard.

What are your preferred amps of choice?

BV is about to embark on a National U.S.A. Tour – what restaurant or food destination in America are you most looking forward to devouring?

Chris’s would be real New York pizza and southern BBQ. Sean says that he is on a constant quest to find good Bloody Marys, and both him, Leo and Bryce are all about getting authentic Cajun food. New Orleans has always been an important destination for us on the road for many reasons and the food is definitely a big part of that. Justin likes Burger King dollar menu hamburgers or any restaurant kid’s menu that he comes across.

What are some of your favorite bands that have stood out and left a good impression that you’ve been fortunate to play with over the last couple of years?

If you could choose someone, dead or alive, to jam with, who would it be and what would it sound like?

Bryce: I’d like to jam with Syd Barrett. It’d be amazing to just get very out there and freak the fuck out. Then when I’m coming down from interstellar space, I’d return to Earth, drink some whiskey, and jam with Robert Johnson. I’m sure my ass would get smoked in either situation and it’d sound like two greats doing their thing, with me struggling to keep up.

Leo: John Bonham and Cliff Burton because what guitar player wouldn’t want to jam with that rhythm section?!! It would sound like me playing guitar by myself. Because they’re dead.

Bädr Vogu will be touring throughout the United States of America this summer!

Here’s a link to their Tour event page. I highly recommend checking them out if you get the chance –