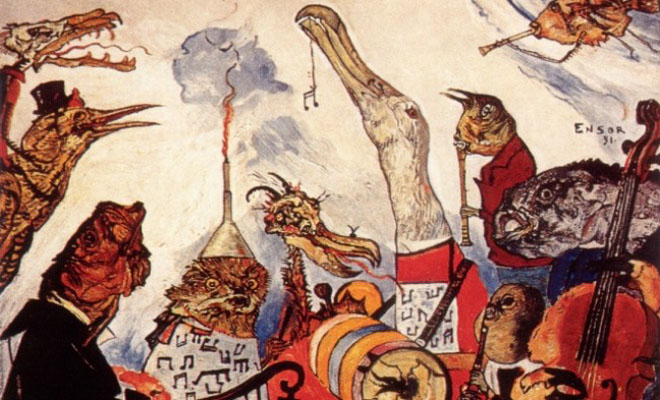 From now on, each month will see a feature in the series entitled Avant Anomalies Of The Month, introducing you to about five to eight records. The usual focus will be on the extreme, avant-garde music that most metallers are either afraid to check out or are just ignorant of them. Take that as a direct insult, because this is set to make waves. The choices will span the experimental tract as wide as it may be, and while some recent releases will be also included, time won’t play a major role in my picks; or at least that’s what I aim for. Let us begin then with our first set: What could you possibly expect from a project named Grind Orchestra, consisting of Boredoms’ Yojiro Tatekawa and Toyohito Yoshikawa? Absolute madness, right? Though you still might want to reconsider that this is going to be nothing like Boredoms, Hanadensha or any of their later projects (e.g. Z-Rock Hawaii, ゑでぃまぁこん). If Ennio Morricone, Angus MacLise and Klaus Schulze were ever to collaborate, they would have harvested ”SoWap“, in the sense that the music of Grind Orchestra is tribal, but it’s set in deep space; it’s western, but it’s eastern; intertextual – and paradox hasn’t ever been more joyful. Solo percussion records tend to become more of dead end, but not when you’re dealing with Tim Feeney. “Caroline” is one of the most adventurous, most dauntless records I got into this year. Simply fantastic. Courtis of the infamous Burt Reynols Ensamble, accompanied by Akiyama, bring an arcane chaos to the concept of duo improv on acoustic guitars. There is a lost sensibility in “Naranja Songs” which hasn’t been explored since the David Fulton/Elliott Sharp record and the Derek Bailey records from the 70’s. It is as though the duo cut across time and space; it’s like they’re performing in your backyard. An unusual lo-fi feel compromises their seemingly hi-fi production, reminding me of what Harmony Korine or John Waters always try to achieve with their pseudo-VHS type cinematography.

Listen to the samples here. The Stooges meet Guru Guru and Flipper. Raw as fuck, loud as a monster – Tivol kill it everytime.

Perhaps nobody has ever been more destructive in his way of creating music than Yasunao Tone. It is safe to name him the godfather of harsh noise and glitch both, for he was one of the earliest composers who dared to dream up an apocalypse of disconnected sounds, putting out destroyed CDs. Obviously you’ve heard of Lunch, otherwise I have no idea what you’re into and I highly advise you not to follow any of my writings anymore. Like almost every singer from the 80’s, Lunch’s voice has changed a lot, and that made me not particularly enjoy the live record she released last year: “Retrovirus“. However, she also released “Taste Our Voodoo“, a collaborative album with long-time sound-manipulator and self-described musical travel agent Philippe Petit. Petit’s collaborative works have been my favorite since 2011’s “The Crying Of Lot 69“, the record which featured Eugene S. Robinson, and the following “Empires Should Burn…” (w/ Asva), plus “Murcof & Philippe Petit First Chapter“. The whole idea of having Lunch speak the hell out while an ocean of abstract and concrete sounds continues to form itself in the background is forcible enough to make one remain motionless throughout the entire listen.