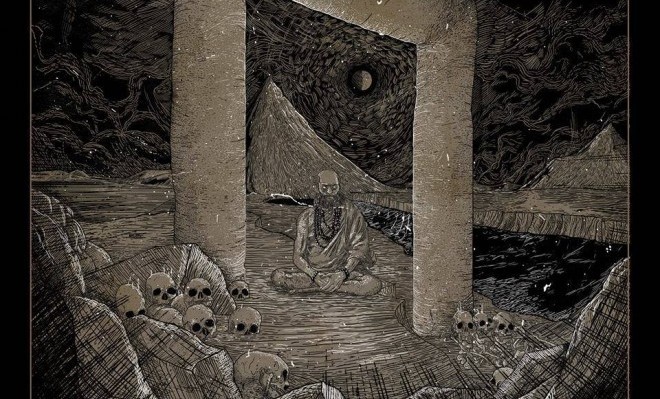 Starting out as a thrash metal band, Canadian destroyers Auroch, have taken a turn for the dark and damned. By adopting a blackened death metal style, the band has been able to expand their brutality to new domains, while still able to retain a thrashy vibe. So, after a couple of split releases, a few demos and the excellent full-length From Forgotten Woods, Auroch are releasing their sophomore album, Taman Shud, through Canadian powerhouse label Profound Lore.

From the very start of the album, it becomes obvious what these guys are all about. Speed is the weapon of choice for the band when it comes to spreading destruction. The insane guitar riffs of “Villainous” take charge and the morbid (as in Morbid Angel) riffs are unleashed in every direction. The whole process is insane, like riding a roller coaster through fucking hell, and this is an unbelievable ride. Also, it looks like this band has no breaks. Just listen to the outstanding riffs and extreme ferocity of the excellent “Voice of Gemini” to get a taste of what lies at the sickening core of this album. Even when they decide to take things to a groovier vibe, as is the case with parts of “Noxious Plume,” they retain the same menacing and brutal attitude as in their faster parts.

And the psychotic trip continues through the landscapes of Taman Shud, with “Death Canonized” finding the band taking on a more haunting and almost dramatic turn, before treacherously leading the track to an outbreak of rage. This is what is so fucking great about this record; no matter how many twists and turns the band takes, even including the interlude track, you know that the end result is going to be one hell of a black/death assault.

Their stomach-turning ability becomes even more nauseating when the two last songs of the album come in, making it hard to decide which of the two can be crowned as the most vicious offering found on Taman Shud. “Defixio” finds the band revealing their unforgiving face, with the blastbeats hammering down without remorse as the venomous guitar riffs paint the soundscapes with blood. And then “Novemportis” finds Auroch taking on an even more destructive outlook, with schizoid solos tearing holes in the music and the band forcing you to surrender your sanity.

This is a precise black/death assault. Even though the duration of the album is somewhat short, I believe that the notion “big things come in small packages” is the perfect description of Taman Shud. So dig into Auroch’s latest album without any doubt.