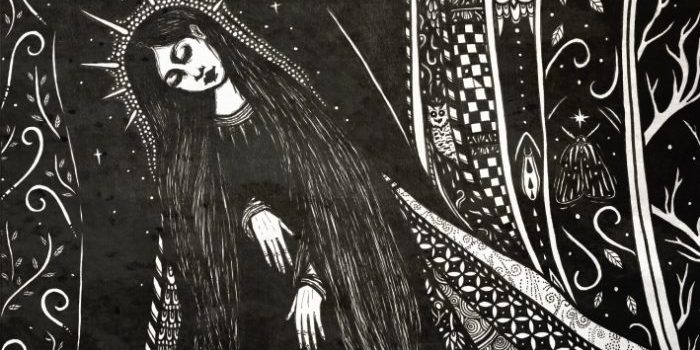 Midnight Conversations was released on Cleopatra Records on July 20th of this year! As usual Miami, FL based Astari Nite has pieced together their own beautiful corner of darkwave. I highly recommend purchasing the actual CD (limited to only 100!) which features some incredible bonus artwork from Anastasia Gwynn Judd both on the sleeve and the actual CD itself, as well as full lyrics to every track. The album is a solid collection of songs mixed by multiple people, most notably Tom Shear of Assemblage 23, who produced the first 5 tracks.

Midnight Conversations opens with “Sunday Queen”, which premiered here on Cvlt Nation back in March. Placing it in the #1 slot makes sense because it’s one of their best songs ever and really draws you in. “Unfulfilled Promise” which premiered in June does at least promise one thing– devastation. Its synthy doom-and-gloom ballad brings with it anguished lyrics that tear at your heartstrings. If you couldn’t tell from the title, “I Am Nothing” is quite a sad follow-up to “Unfulfilled Promise”, the words “we’ll never be the same again” painting a tormented image. As usual Astari Nite manages to bring a kind of whimsical, dreamy emotion to the otherwise bleak words. Ultimately this album evokes that same feeling one gets when listening to a Til Tuesday album, whose lyrics are also heartbreaking and hopeless, yet the music itself is wonderfully touching.

Before you start to feel too melancholy, “Rosary Society” changes the tone of the album to something much more dancey, opening with a fast and spidery guitar. It’s easily one of the catchiest song on the album, upbeat and melodic in spite of the equally tortured lyrics. A big highlight for me is Astari Nite’s cover of Til Tuesday’s “Voices Carry”. It’s far from an obvious song to cover, and they really add their own flavor to it. I especially love the style of synth they use and the dramatic way Mychael sings their lyrics. The remaining four tracks on Midnight Conversations were previously released on the Dreams of Majesty EP, albeit in reverse order (which is quite fitting given the occult undertone). The following three songs were mixed and mastered by Reese Bridges.  “The Witching Hour” is my favorite of these, it has such an uplifting shoegazey Cure feeling to it. “Divination” is another strong track for me, it’s extremely romantic and dramatic in all the best ways and I find the chorus getting stuck in my head a lot. They also have a fantastic music video for it.  “The Girl Who Tried” is perhaps a follow-up to Astari Nite’s previous song “The Boy Who Tried”. While it’s not particular similar, it does have the agonizing lyrics you’d expect and it’s very synth driven. Final track “Love Sick” was mixed by Emily Lazar at The Lodge NYC assisted by Chris Allgood. It has a bombastic shoegaze sound to it reminiscent of Disintegration by The Cure. This one also has a great music video.

Q: Midnight Conversations is a beautiful piece of work. How long in total did it
take to complete? Did you face any hurdles along the way?
Mychael: That is very kind of you to say, thank you. Wherever lies beauty, rest assure sadness lurks in the dark. This record took a lot from me in respect to what I had to say through each song. I can honestly admit that being brave enough to allow myself to dwell in places in my mind that I didn’t think was possible was my most difficult confrontation. We completed the album the night before our performance in Los Angeles, this past May. Perhaps the process with Tom Shear (of Assemblage 23) regarding time took 3 months at most. It’s a dream come true to have him produce the album.

Q: What were the biggest inspirations for this particular album?
Mychael: Ultimately, I am inspired by how I can have everything in the world and yet still feel so alone inside. I’ve met a few magical people in my recent years of traveling and they have touched me deeply. I don’t know, my songs tend to radiate confusion at times in my head, it’s all just a “weekends worth of sadness.”

Q: Are you pleased with Midnight Conversation’s reception over the last week since
the release?
Mychael: The past few days have been very reminiscent of the holidays. People from around the world taking time out of their day and or night to simply message us pretty sentiments really melts my heart. Individual’s like yourself asking questions to report to the world, It’s a beautiful feeling and I’m in love with it all

Q: What have been some of your favorite shows you’ve played in the last 3 months?
Mychael: Oh my, Peter Hook and the Lights was nostalgic, and performing with DAS Ich yet again gave me that holiday spirit of a feeling. Our album release events really brightened a few nights. We were able to see many friends during the time and catch up for a bit. Our final travels took us to Orlando, FL. which I find to be a magical place. I saw a ghost in the end of it all, sadly enough, I miss it all.

Q: Who did the artwork for Midnight Conversations?
Mychael: A witchy and mystical individual named Anastasia Gwyn Judd, whom is a beautiful friend from Illia’s circle. After he suggested that I see her dark art I was speechless by the fact that she creates everything freehand. I did have the privilege of speaking with Anastasia on a few occasions and to my surprise we were both in agreeance that our music and her art complement one another significantly. Q: Have they done other artwork for the band?
Mychael: This is our first engagement with Anastasia.

Q: Your cover of Til Tuesday’s “Voices Carry” is incredible! Why did you decide
to cover it? Are you a big fan of Aimee Mann?

Mychael: Voices Carry is a song that pulls on my heart strings to the point that I find anxiety to be comforting. Aimee Mann’s music is brilliant and I have always found her to be rather fascinating. The response on our take of the song has been overwhelming, we find that people are now identifying to our version of a classic.

Q: Four months ago you said Howard and Illia had already begun writing songs for
your 2019 release! Are you in the thick of it at this point?
Mychael: We begin tracking at the end of Summer. Until then I’ve been sworn to secrecy to keep the name of the producer for this album a mystery.

Q: What has been inspiring you lately?
Mychael: The thought of witches and Halloween candy. Snowy nights around Christmas time. The sound that Brian Molko of Placebo’s voice makes when he extends a word, and the way Hope Sandoval of Mazzy Star radiates with such beautiful sadness in her songs. All of this has been very influential as of recent.

Q: What is in Astari Nite’s near future?
Mychael: We continue to get asked if we will put out another music video in support of Midnight Conversations. Of course, I would do anything to see someone smile or at least grin so it is safe to say we’ll start filming in August. Our travels take us to New York in September for a performance at A Murder of Crows festival, and then our year will end with a tour in Germany for the Danse Macabre Festival- Gothic Rock Edition including support by Virgin In Veil, The Spiritual bat, Wisborg and I believe Masquerade will join us on the last night of the tour. One never knows where the night will take us. Until then I will continue to smile awkwardly and thank everyone I ever meet and simply say Thank you for making my life strangely livable.