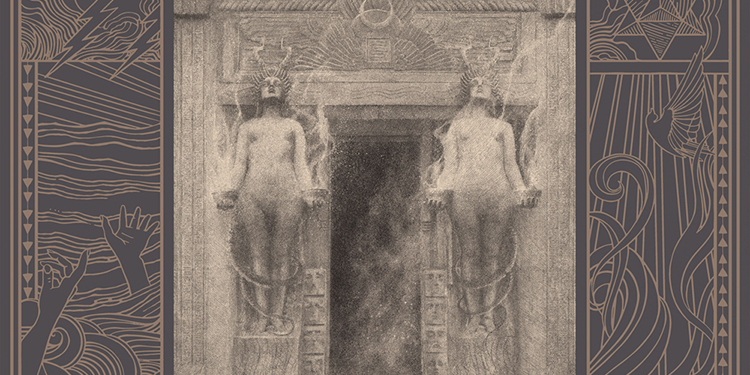 This absence was strongly felt. Ash Borer, one of the leading black metal bands of the US scene, were keeping extremely active since 2013, releasing a couple of excellent records in their self-titled debut and Cold of Ages, a split with kindred spirits Fell Voices, and the fantastic Bloodlands EP. Three years is a long time to wait, but now they have returned with The Irrepassable Gate, a record that expands their sound further.

The production for the album was helmed by Randall Dunn, and the effect that he had on the work is prominent. The two previous albums had a suitable production for the type of sound that Ash Borer were after; however, Dunn brings it to another level. Able to retain the primal aspect and raw quality that was inherent in Ash Borer’s modus operandi, he manages to also expand their sound, turning it to an all-devouring, thick wall that relentlessly suffocates.

Obviously, Dunn cannot take all the credit for the record, and if it was not for Ash Borer’s unique riff crafting, all this would be meaningless. What these guys are doing is stunning, being able to take on the format of the standard black metal progression, with all its dissonant elements, but also push in aspects that are verging from noise rock to post rock. The cyclothymic mentality, the constant switching of gears on one hand, and the boundless expansion, the wall of sound approach comes together to construct this epic result. It is not an album that just stretches on the time domain, something we are used to seeing with Ash Borer, but also in terms of the panorama, becoming all-encompassing, sometimes with the aid of experimental means, as in feedback and effects, or plain guitar leads. It is through this volatile nature, the switching between different moods that makes this music so enticing and honest. The faster, aggressive parts carry the hostility and hatred of the black metal scene, with the drums constantly pummeling down and the vocals through the distorted veil intensifying the experience. Detours are still in play, and Ash Borer do not retain a single facade through this process. Taking on a more atmospheric element, they construct the ambiance, bringing moments that promote repetitive melodic lines, through which ritualism emerges. It is a graphic result, building a stronger narrative for the band, and also leads to further explosive moments of doom/sludge grandeur, as “Lacerated Spirits” illustrate

It is an absolute return to form, with Ash Borer achieving a degree of change and remaining true to their past. The Irrepassable Gate feels like the album they have been working towards, and it shows a more complete vision from the band. This is Ash Borer at its best.