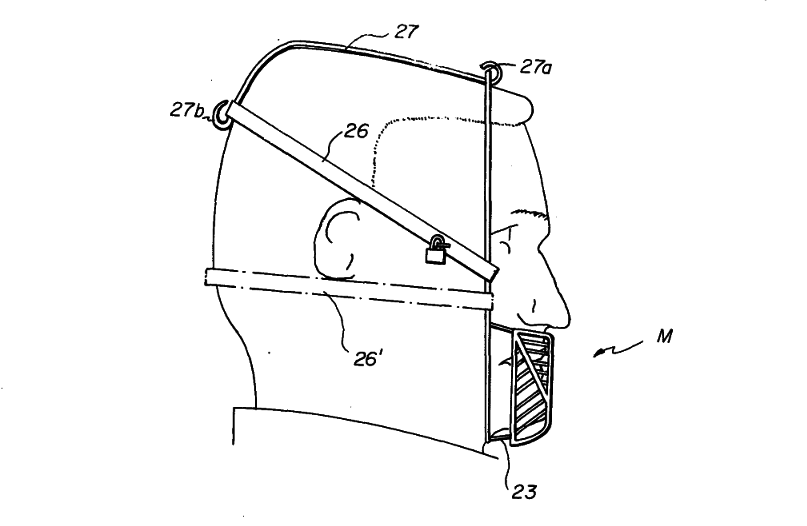 a primary object of this invention is to provide a new and novel device for preventing the consumption of food by an individual.
It goes into more detail about who the invention might benefit:

The temptation to eat which leads one to eat excessively is ever present and the ready availability of attractively prepared, taste-tempting foods makes the temptation to eat and therefore to over eat virtually irresistible. Frequently, this temptation is so great that compulsive eating is not uncommon and many persons are virtually without the strength of will to resist overeating. The average person, therefore, does have a problem as to the over consumption of food but, even worse, when certain individuals are exposed to food constantly such as chefs, cooks, restaurant personnel or the like, it is a foregone conclusion that these individuals will consume far more food than is proper particularly when such food is usually readily available at no cost. Typical of such groups of individuals is the housewife who must frequently cook meals during the day which generally includes the preparation of such fattening foods such as pies, pastries, and the like. During the preparation of such meals not only is there the temptation to nibble on the food being prepared but it is generally necessary that the food be tasted during preparation thereby constantly stimulating the appetite and promoting the consumption of large quantities of food.
I’m imagining a husband preparing to go to work and strapping the anti-eating face mask on his wife before he leaves.

But couldn’t the wearer just lift the mask off? Nope. It’s locked on, though “under emergency conditions, the strap may be cut and the face mask of the invention removed.”