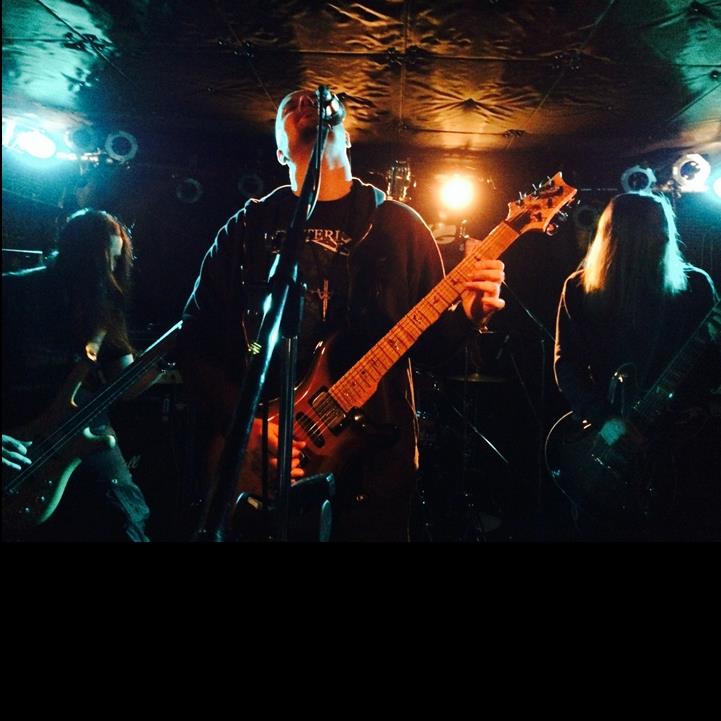 Worship, or Daniel P., has long been seen as one of the Kings of Funeral Doom Metal. At this point in time, Worship is the musical outlet for one tortured soul. Worship is one of the heaviest bands on the planet. Worship, Corrupted and Asunder are the unholy trinity of Modern Heavy Music.

Daniel currently resides in Germany and composes scores for film and video games. I got in contact with him to get to know more about the man behind one of the most revered Crushing bands within the realm of the Extremely Heavy. Let the Worshiping Hour begin…

Can you tell me about your inspiration for writing for Worship?

My influences, band-wise, are still quite 90ies; I rarely listen to any bands, my music is very internal, ego-trippy. I see bands on tour, and I check out reference CDs in studio, but I am not one of those collectors (who rule)…

Where do you draw influences from and what bands helped you begin down your path of triumphantly bleak musical misery?

Influential were I guess old Anathema, My Dying Bride, Tiamat, old Death Metal and sad music of all shapes… Worship Live at Brutal Assault in the Czech Republic – 2014

When constructing music, do you have a specific tone in mind or do you play around with riffs and then put it together from there?

Differs from album to album. Terranean Wake was constructed and polished solely in my head for years and years. The way my weird head works, I have no probs writing and layering several parts only in my head. I changed the songs around up to 100 times till I found them ready and recorded them after 5 years or so.

The new album, on the other hand, is fueled by that amazing event of our tour with Faal. That tour was very intense and shaped us. I wrote a lot right after the tour, more guitar-based this time, more riffy stuff, trying to capture what I felt on stage.

What amp setup do you Worship?

I like all kinds of tube amps. But, currently I use an H&K at home, who endorse me – thanks!

If you had to pick a top 6 favorite movie scores – What would they be and Why?

That is hard. As I work in that field, I need to travel all kinds of roads there. Hmm. For the current mood I’d say:

Highlander (chaotic score, but the sad parts are stellar. Also a good description of Queen in general. It’s hard to decide on such things, but I have settled on “who wants to live forever” in case somebody asks me what my favourite song ever is)

The Godfather (Sicily Theme is quite crushing)

Once Upon A Time in the West is awesome,

And pretty much everything by John Williams, to squeeze it down to 2: Schindler’s List (wow) and the Star Wars Trilogy (possibly the best score ever made )

Your work is powerful. The monolithic dirges that you have orchestrated are harmoniously transcendental in a way that lost souls all over the world have listened to and appreciated your pain. How does it feel to know that your personal contribution and inspiration is limitless due to the advancement in digital technology and p2p file sharing as well as analog collecting all over the whole world?

Thanks for your nice words. It does feel good to reach so many people’s hearts, but I am hungry for more! Tell a friend!

The digital now is the harbinger of the end of the commercial consumer music. By splitting the benefit (I hear a song!) from all perception of value (Pay? Why? It’s on YouTube!), we have killed this motherfucker. Have you seen the current numbers? According to the data, Worship is in the top 5% of all bands, sales wise. That is pretttty insane.

Nobody sells anything anymore. Not 1 platinum album this year.

That shit costs money, we have to take time off work to rehearse, write and record. Studios cost money, engineers, equipment, etc. We are currently deconstructing rock star as a career, because we are handing over a world in which music is for free. Basically, we need to spend all our time trying to somehow make this bitch walk another mile. Taylor Swift might be the savior (or, maybe it’s just the Insomnia speaking).

It feels good that vinyl is getting stronger, I never stopped believing in it. And I love my international fans!

I am glad that I earn my money outside of the rock/metal/album scene. Working for games and movies, THEY fight that shit left and right. The Moscow festival was great, because of the crazy audience; Brutal Assault was a milestone; the two Japan tours were intense and extreme; and of all the other great gigs I need to mention – Hamburg 2012, which feels like my best gig ever, and the finale in Berlin of our last tour, very packed and WILD crowd!

We really got close to our touring partners (Faal and Loss) of the last 2 tours. Another highlight was playing with Corrupted, who supported us in Osaka, JP, which was quite epic!

I’ve been following Worship and reading about your continued progress on writing for the next album. Here’s a quote from your official facebook page :

“Thunderstorm… Blackout… Well, I thought I will work a bit on my favourite song for the next album… BAM 3 hours gone… This song is like licking cocaine out of the Holy Grail… In my personal opinion pretty much the best Worship song I have written so far…”

Can you tell me more about the concept for the next album and when you expect to have it ready to share?

I have to be careful. I am a moody on/off perfectionist lazy workaholic, so all my schedules for Worship are all over the place. Mid 2015 is a safe guess.

I can’t say much else, I don’t feel ready to spill much about the concept, but it is slightly different this time, but very true to ourselves. 5 songs (so between Dooom and TW as to length and structure), riffier, harder in parts, but no shocks if you know us live or our other stuff.

At this point, I am the only one who knows the songs (still that ego bastard), so it’s pride, fear, doubt, awe and fear again…. Is it as great as I think? No idea. Exciting times.

Do you have any plans to play in America or any International Tours/Shows coming up? Worship originally started out as a two piece between you and your now departed friend Max; after Max committed suicide, you channeled him and his energy on the later releases with vocals that he recorded before he passed. If you could jam with any musicians dead/alive, who would it be and what would it sound like?

I would write the saddest album of all time, and let Freddy Mercury sing it. I would also like to produce the next Muse album, turning up distortion when they are not looking, and take drugs with them until they think it’s 2004.