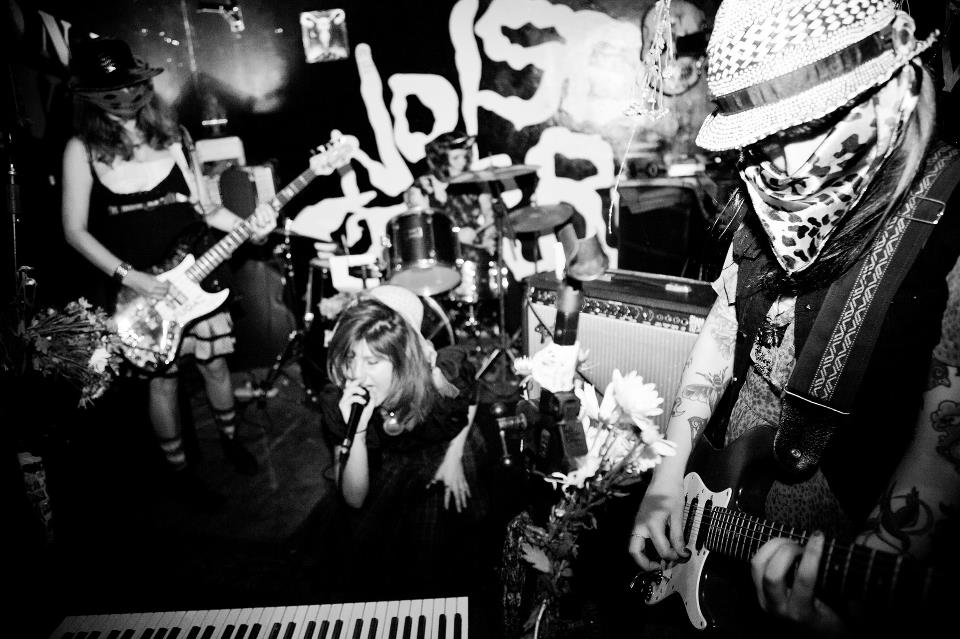 “A more psychedelic and garagey Xmal Deutschland” might be one way to describe Rakta’s hypnotic and layered, guitar-based, gothy punk rock. Their music garnered lots of praise early this year across various ‘zines and on quite a few garage, punk, and deathrock websites (including here at CVLT Nation). The Brazilian all-female band’s music is characterized (as I wrote in an earlier review) by “echoing vocals, darkly swirling guitars, and spooky organs [that] pull you into a fuzzed-out soundscape drenched in ghostly reverb, drawing you down a sonic vortex and into a hauntingly psychedelic world that seems one part psych garage, one part deathrock, and one part spaced out dark punk rock.”

The review of Rakta’s 2013 self-titled LP in the February, 2014 Maximum Rock ‘n Roll (#370) (“Record of the Week”) was almost too over the top, but accurately captures the excitement that exists about the band:

“RATKA is an all-female band from São Paulo, Brazil, that seem to have come from out of nowhere to make most of the current post-punk/anarcho wave completely irrelevant. This is the next level in this style, borrowing elements from all the spooky classics, but adding something so undeniably new and unique that the game is permanently changed. RAKTA eliminates all sense of retro-ness to the style and come off like they just now invented the damn thing. The songs create an otherworldly atmosphere while still keeping your feet tapping. It transports you to this weird dimension that feels like it’s trying to keep you inside of it forever. It would have been the perfect soundtrack for a Maya Deren film.”

So what I think the MRR reviewer is trying to say is that the LP is good. I concur.

It was a pleasure to be able to talk to the band about their music, what inspires it, and what their future plans as a group are. Rakta members Carla, Laura, Natha, and Paula were interviewed by Oliver in July, 2014.

Q: First thing I have to ask: The band name, “Rakta” – is it a Portuguese word? What does “RAKTA” mean and who thought of it? Q: For folks who may be reading about you for the first time, can you give us some basic details? By this I mean: When did RAKTA start, who were the founding members, and who are the members of RAKTA now?

Rakta started because Carla bought a bass and was looking to start a band. She spoke with Natha about it, and both were looking to other people who were meant to play other instruments. Natha had a band before called VÍTIMA, and that band was over, so she wanted to start another one. That’s when Rakta was formed.

And yes, our founding members are the same as the current lineup of RAKTA. Carla, Laura, Natha and Paula.

Q: What releases do you have out so far?

RAKTA: Our first release was on Virus Tropical, a K7 by Jamaican Nights Tapes (a shitty DIY tape label based in São Paulo made by Rakta members and good friends of us) with other bands including Cadaver em Transe, Likso, and Gattopardo. This tape traveled a lot around the world and a lot of punks may have their own copies. We are planning to make more copies.

In 2012 we recorded, and just in 2013 we released our self-titled LP on Nada Nada Discos and Dama da Noite Discos. After that, we released a special tape for our South America tour called “Tudo que é Sólido desmancha no ar” with our 2 new songs.

Q: Your sound, to me, seems inspired by psych-garage rock, early 80s deathrock, postpunk, and also just plain old punk. Would you agree with this? What was the result that you all were going for when you started to make music? Were you thinking, “Oh, we should play darker stuff mixed with garage punk,” or – what was the thinking behind the music?

RAKTA: Honestly, when we started the band we didn’t have in mind what it was gonna sound like. It was a free-form experiment.

We tried to play some cover songs, including songs by Discharge and Ramones, but nothing was going the right way, so we decided to try playing something that was more us. Actually Paula, in our first rehearsal, was saying all the time, “We should make our own song!!” So we started to make our song “REPETITION” that’s on our LP, and right after that came our “WELCOME TO THE FOREST” song.

RAKTA: We are influenced by people who produce something that’s true to themselves. Rakta was made by that. We love to play with bands that have the guts to do anything they want, that like to experience new ways and forms to produce their music.

Musically, it’s really hard to give you an answer. We all have too much in common and sometimes nothing in common. We know that people usually compare us to Xmal Deustchland and other peace and postpunk bands of that the time. And we do like of all these bands, but we are not attached to the genre. Actually, we are not attached to anything, and this is what we are trying to advocate.

Q: Speaking of favorite bands, who are your favorite older bands to listen to?

Laura: My favorite band is Gauze, but I do love Cólera.

Laura: Hard question. There are a lot of good current bands going right now. I think I go more for of the radical and badly-played bands that seem to be more sensitive than anything I’ve heard before. I don’t like beautiful music. I don’t even like artists. I like music filled with ideas and meanings, and there are not a lot of bands that I’d include in this small group. But I can say FRAU, LAS OTRAS, HYSTERICS, ORDEN MUNDIAL, PIÑÉN, GOOD THROB, POST and REPLICA. Damn, I like it angry.

Paula: REPLICA, ALL THEM WITCHES and PURPLE RHINESTONE EAGLE, and a recent Brazilian band called POST. Q: Is it true one of you all went to France to see a PART 1 show? Has PART 1 played any role in influencing what RAKTA’s music is all about?

RAKTA: Well, it wasn’t a concert in France. It was in London, and not just one of us was there, but actually two. Carla and Laura were travelling around Europe together and they knew before arriving in Europe that PART1 was going to make a concert after a lot of years. It was a good adventure.

They arrived there early and met PART1, Integrants, and a lot of punk icons – hahaha. People of The Mob, Hagar the Womb, the Kill Your Pet Puppy fanzine… It was a night of good beers, radical music, good friends, good chats… A night to remember.

So, it might be influenced. Carla says that it influenced her a little.

Q: It looks like 540 Records in Texas is re-pressing the vinyl of your 12″ release for stateside consumption. When will this happen, and do you have any other new recording projects in the works?

RAKTA: Yes, it is available right now! We have to thank Timmy for his support and interest in the band. He just wrote us and said, “I want to release your LP record.” And we thought, “WHY??” Hahaha, but it happened.

And ah! About new projects, we are working on our 7’’ EP with 2 new songs that will be ready soon. Q: A question I ask all bands: If you all were stranded on a desert island, and somehow magically had the means to play records, but could only take 5 records with you, what would those 5 records be?

Q: Is RAKTA a political band in anyway? What are your lyrics about? Can you describe the lyrical and singing style of the band?

RAKTA: In SOME WAY RAKTA is a political band. Each member has their own view about RAKTA being a political band, or not. Individually, each one of us has our own beliefs and practices. We didn’t start the band because we had a political emphasis. We started because we wanted to play and discover what could come from that. Being an all-women band is something that empowers us and, consequently, the people that surround us. They can feel what we are doing there and what we are playing. The singing and lyrical style came naturally, as did all the rest. Our lyrics aren’t political (in the concept as is mostly known), but they carry a deep and profound message about inner knowledge, and the micro & macro relations. This is the seed of change: discovering and revolutionizing yourself. We leave the descriptions and the labels to the people who listen to us. You can relate us to anything you want, it’s free. We just want to simply BE. Q: In February, Maximum Rock ‘n Roll gave you all an absolutely glowing review, giving your record the “Record of the Week” accolade. They wrote: “This is the next level in this style, borrowing elements from all the spooky classics, but adding something so undeniably new and unique that the game is permanently changed.” How do you feel about these comments? Are they accurate, and what is your response to them?

RAKTA: We were really surprised, and we are really glad for this review! There are no words to express that. We love you MRR!

Q: A lot of reviews will mention that you all have a gothy or deathrock sound, and it seems a lot of the folks that like you all consider you, for fairer or nought, to be part of the newer dark punk milieu/movement of bands like Blue Cross, Arctic Flowers, Belgrado, Pleasure Leftists, etc. Is that correct, or – what do you think of this?

RAKTA: As we already said, we dont want to be attached to any genre. We do like all of these bands. Some of these bands are great friends of ours. But when we started the band, we weren’t looking forward towards what we would play. No one in RAKTA was a musician that played in a orchestra or had a lot of experience in bands. When we started to make our music, we were playing what we could play, not trying to make something post-punk or deathrock style. Of course, we like it, but, honestly? We don’t feel part of it. Q: Will you all be touring any time soon? What about any future tours to the USA? When might that happen?

RAKTA: In 2014, we will do a US tour in October and a European tour in November as well. Fuck yeah!

Q: Where can readers go to find out more about the band? What websites can people go to to check out your music?

Q: Thank you so much for the interview! Is there anything I neglected to ask, or anything you’d like to say that you didn’t get a chance to, so far? If so, go ahead and say it here!

RAKTA: Thanks Oliver to make this interview, thank you about the support and the interest in the band. We are glad for that. What we forgot to say? Let’s keep DIY punk going!