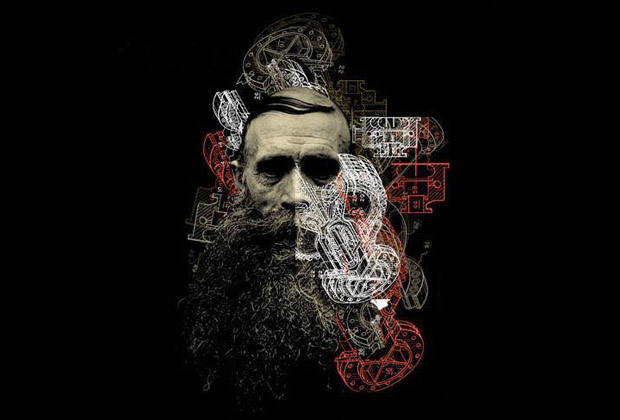 It’s always great to find albums of high quality from independent bands; it shows that musicians can still achieve an extraordinary level of production and musicianship on their own terms. At least that is the deal with the Greek band Allochiria, who take their name from a neurological disorder in which the patient responds to stimuli presented on one side of his body as if the stimuli had been presented to the opposite side. Quite a cool name if you ask me, and if that first impression was not enough, the opening track “Today Will Die Tomorrow” begins with a quote from William S. Burroughs’s masterpiece, Naked Lunch, which really had me interested to hear what was coming next.

So on the musical side, Allochiria find themselves in very interesting territory, somewhere between post-metal, sludge and psychedelia with a necessary amount of some hardcore-like outbreaks. Their mode of operation is quite simple but deadly. First they try to mesmerize you, forcing your attention to their repetitive patterns (greatly aided by the drums) while their effects go complete crazy over your ears. That is the case with the dreamlike melodies of “Today Will Die Tomorrow”, enriched with some moments of emotional rage and anguish, a pattern they also seem to follow in “Archetypal Attraction to Circular Things”. Their plan works, and soon enough they have you hooked and completely helpless in their maze, leaving you with a feeling of wonder for their enthralling melodies. But that is not the only face of Allochiria, who once they have you sedated with their ethereal phrases, put on a much more brutal and unforgiving face, annihilating everything in their path. Their heavy sludge parts, sometimes with a hardcore-like background echoing through them, as is the case in parts of “Archetypal Attraction to Circular Things,” get the job done. In a sense, they follow in the footsteps of bands like Neurosis, as the outbreak of anger in “Oppression” gives away, but other times they acquire a more direct, almost Cult of Luna vibe, as is the case with “We Crave What We Lack”. Of course that does not mean that Allochiria are just copying other bands. This band certainly has its own unique way of crafting tracks and raising ambiances.

The steady beating that is “K.” shows the level of extremity that this band is willing to go to in order to make an impact, while they still find room to forge cryptic ambiances out of dust. And one of the most remarkable moments of the album, the band shows how diverse they can be when they suddenly introduce clean female vocals amidst a storm of heavy riffs, creating an insane contrast between the two. And when you witness the sheer transcendent nature of the closing track of the album, “Humanity is False” and its hypnotic melodies, mystical aura and ritualistic vibe, you come to understand the majesty that Omonoia unveils.

So if what you are looking for is an album that can in equal parts mesmerize you and hit you with a shovel across the face, then you need not look any further. Allochiria, with their debut album, have taken their initial step into the extreme music domain and I for one cannot wait to see what they come up with next.

In this article:allochiria, hardcore, omonoia, Post-metal, self released, sludge