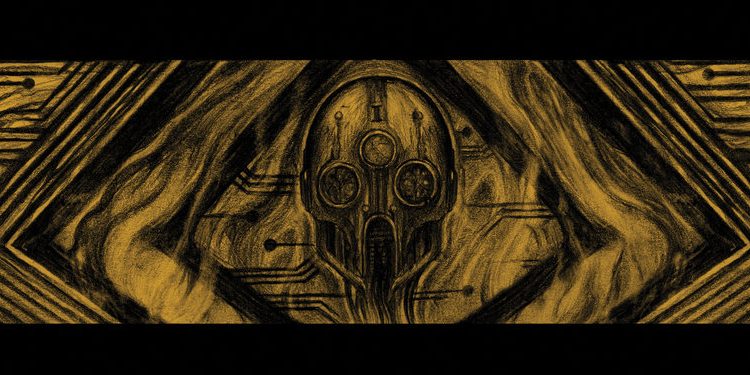 Vile Creature by name, although most certainly not by nature. This two-piece are uncompromising, confrontational, challenging and actually rather good. But despite hailing from the frozen wastelands of Canada, don’t ask this pair to get their skates on. They don’t do fast. Or not often anyway. For much of this four-track release they move with such weighty ponderous steps that you know it’s going to take them a long time to reach their destination of choice.

Sounds boring?…. Well fortunately no. Vile Creature make slow sound positively rapier, as their crushing blows leave you reeling like a bloated heavyweight. The punches are methodical, you should be able to see them coming and cutely sidestep them, perhaps drop the shoulder, take a step back, duck…. No matter. Vile Creature still manage to connect either with your skull or your solar plexus.

You see, when you listen to Vile Creature escape is about as likely as a stint in Alcatraz. The bars come down around you and even if you had a key you’d struggle to make out the door as the oppressive mists close in on you. The screeches that emanate from within this whirlwind of fur-ball feedback are at times similar to French miserabilists Monarch, although if anything Vile Creature’s oratory has an even more sinister side, as though having leapt from the script of a particularly gruesome horror flick.

Husband and wife team Vic (drums, vocals) and KW (guitars, vocals) are clearly on the same sonic wavelength politically as well as poetically. Much of their anger and angst is driven by the defence of the underdog, the cast aside, the dispossessed with the sexual politics of the LGBTQ community also integral to their work. ‘Water, Tinted Gold and Tainted Copper’ is a remarkable opener, stretching out to 10 monstrous minutes, this pretty much grinds you down, and the feeling is that Vile Creature are on a mission to screw a metaphorical nail into your cranium. At times the remorseless thudding and ratcheted riff kicks are soul-destroying in their depth and command. When the addition of male vocals makes for a final two-pronged larynx ripping push to the peak you feel that you’re having to hold on for dear life.

It’s an immense opener, and introduction to this shuddering Ontario twosome and the punishment is every bit as brutal on the following ‘Circuits, Bending and Breaking.’ Again the opening sequence is torturously slow, funereal moody doom broken this time by anguished male cries that hardly instill confidence that this number is going to offer any light relief. In fact don’t bother looking. By now we kind of know that Vile Creature aren’t the kind of pairing to offer easy exits. Once you sign up prepare to be mentally tested. The funereal blows almost carry the stench of death and certainly the pain almost seeps through the seismic anvil attacks, at times reminiscent of early Conan at their most neolithic.

Longest track of the four is ‘Forest, Subsists as a Tomb’, which has some Mary Chain style feedback from the off, before the monosyllabic strokes emerge once more, played out slower than a dying man’s last request. Vile Creature gradually pull the chord tight, squeezing the air from the room as the demonstrative ear-drum battering repetitive riffage asserts, vocal intensity whipped up like a soufflé and the insurmountable drums start to hit the skin with ever greater levels of conviction. It’s merciless stuff but completely compelling as the curtain of decay is drawn ever further down around you. The vocals are strained to breaking point, almost to the extent that you fear medical intervention may be required. It’s punishing, passionate and prehistoric.

‘Sky, In Descending Pieces’ sustains the gloom and dark ambiance that envelopes this release through to the end. It’s a committed and steadily evolving composition but one that keeps its power firmly under lock and key. There’s no explosion of pain, just cruel agonies slowly played out against a haunting soundscape. A riveting piece with which to bring a truly stunning album to its conclusion.

Cast of Static and Smoke is on Bandcamp although a desirable cassette, limited to 100, would sit rather nicely in your collection. File under heavy as fuck.