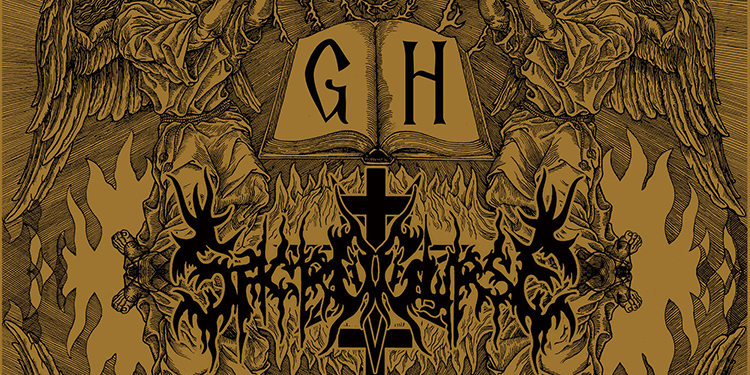 Sacrocurse have released a new offering to the Ancient Ones, besides fans of the flourishing underground scene who love bestial black/death metal.  Sacrocurse have been steadily releasing material through various vaunted labels, starting out with a razor-sharp guitar attack set to blastbeats years ago, while since then refining the songwriting to incorporate better song structure, catchier compositions, nuanced tempo changes and just about everything they can do to produce music of nefarious intent and aesthetic quality.  This latest foray into black/death metal is perfect for the ritual. These prayers to the unfaithful comprise the album Gnostic Holocaust, Sacrocurse’s most poignant release yet.

The vocals are savagely bestial, never exactly roaring intensely, instead hoarsely rasping these blasphemic lyrics perfectly, the way bands like Vomitchapel and Blasphemy do.

The guitars are churning tremolo picked progressions of rhythmic teutonic weight.  They sound like steel grinders grinding living bone and flesh.  The slower sections never last for long before the band resumes the wailing leads and hyperion tremolo riffs.  The drums are steady thuds, sounding like a dozen humans battering a homeless derelict to a bloody pulp on the street.  At the same time, the riffs maintain Sacrocurse’s penchant for steel string grit, the riffs sharply cutting through pillar after pillar comprising the foundations of a cathedral.

What the band may preach is unknown to most of us.  Mostly, we love the musicianship that these sacrilegious artisans unleash upon desecrated ears in the underground.  Often, the band still utilize black metal’s classic mid-tempo groove in the middle of some tracks.  The drums add assault and battery to this group’s intent to attack all things inferior to Satan.  And, when the lead guitar wails to Armageddon and back, it is clear that the underground is the only desolate wasteland that will celebrate such musical genius.  Even a dozen kvlt wannabees from the suburbs cannot stomach Gnostic Holocaust’s sincere intent to violate the inviolable.  Once you hear this and love the sound of impenetrable darkness besieging daylight, there is no turning back.