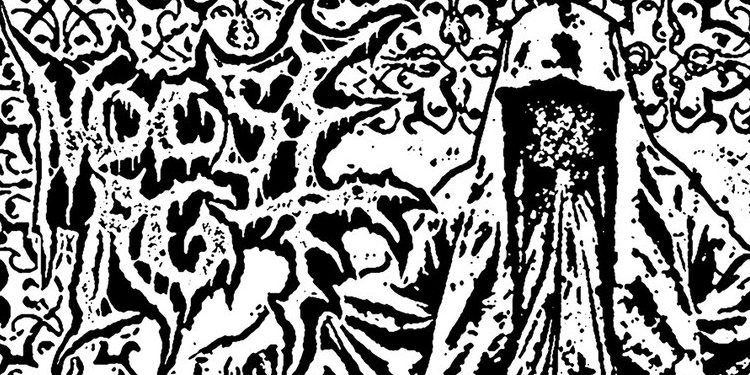 Abandon your sub-genre preferences for a second, Cvlt Nation maniacs! Gruesome old-school death metal is here to stay, and Sentient Ruin Laboratories has just released another classic example of the style care of Noose Rot’s EP, The Creeping Unknown. Only four tracks long, the release is fraught with doom downpicks and hardcore chugging. Noose Rot is as heavy as they come. The polished production actually aids the band’s musical output very well, and the songwriting features enough nuance to comprise a healthy account of death metal that won’t solely be appreciated by death metal fans alone.

This EP is their debut, and Sentient Ruin Laboratories was wise to release it. The band has a high arching trajectory for the potential release of brilliant future recordings, and The Creeping Unknown delivers a much-needed kick in the balls to death metal fans who think they have heard it all. This drips filth and slime the quantity of which would fill bucket-loads, but the production values lend listeners an easier experience deciphering each bandmember’s performance. For death metal EPs released early in 2018, Noose Rot’s The Creeping Unknown comes highly recommended indeed.

The band periodically attempt shred and groove. The chugging shows just how heavy the production values capture the guitar grit, and the drums slam the beats home without going off at every turn. The vocals are guttural as one may expect, and the album is all said and done before fans have a moment to neglect an intent listen. Noose Rot definitely works the Rambo philosophy on their EP, The Creeping Unknown – they get in, get the job done, then get the hell outta there! It works in spades, Cvlt Nation friends.

The tracks don’t roll out the red carpet for rock guitar solos so fans should feign interest in lead guitar acrobatics some other time. Noose Rot deliver a brand of sickening, but highly effective, heavy-as-fuck death metal style for fans who want clearer sound quality to go with the old, old-school death metal template. The Creeping Unknown has hardcore edge, old osdm groove and shred, and doom death manic depressive stop and mid-tempo tempo changes. They never really go full-blast and neither do they whip it up at thrash pace, but Noose Rot deliver a fine example of death metal that is as heavy as fuck and unignorable, so dust off your turntable and let the neighbors run for the hills as you play this fucker at full volume! In this article:NOOSE ROT, sentient ruin laboratories, the creeping unknown