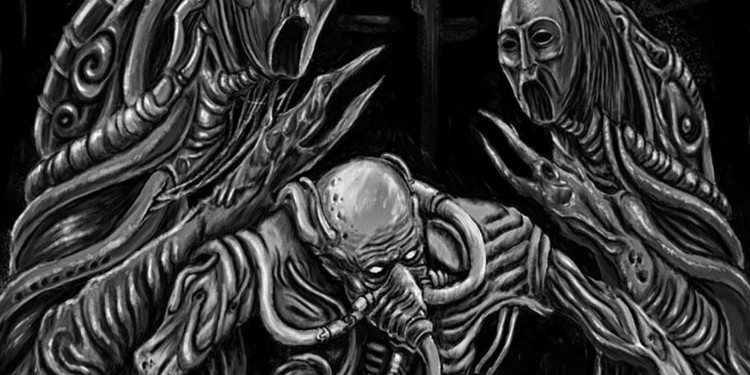 Space alien motif, you say?  I don’t mind having it with my death metal.  As long as Cosmic Void Ritual is cranking it out.  After all, their compilation, The Excreted Remains of the Sabatier System cassette released by Blood Harvest Records, is one of my favorite cassette releases of the year.  Not just as far as space alien death metal is concerned.

This sounds real old-school.  It sounds 80’s or 90’s style almost – when bands were raw and everyone liked the production just the way it used to sound.  No digital nothing.  No Fear Factory or Machine Head.  Or Terry Date ruining Metallica for good.

Cosmic Void Ritual may name its songs using space alien themes for inspiration, but the music is top to bottom enjoyable.  I don’t reminisce about bands from Sweden, like Entombed, when I hear this.  The music reminds me a little of Morgoth meets Voivod.  The riffs tend to repeat, but the subtle changes are enough to keep things fresh.  You’ll love this if you’re into raw death metal with a twist.  They aren’t the most barbaric, brutal, or technically-pervasive.  The riffs are simple but weird, the rhythm section adequately keeps time, and the vocals are lower-register bellows that burgeon with basso profundo thunder.

Fans of The Faceless can stare out into outer space and wait for the next space shuttle launch in order to find better musical inspiration.

The band essentially hovers on the double-kick, thrash tempo, and brief blast beat sections.  I don’t mind the monotonous quality of the tempo changes.  This isn’t nuanced songwriting making itself felt.  It is only four tracks long and all the better for it.  Had this been a full-length album, I might have drifted into another ethos in between tracks, but as it is, I can’t get enough of this record.  Blood Harvest Records knows its stuff. Especially quality death metal.

Better than the main riffs sometimes, the leads are positively Voivod meets Nocturnus.  And, didn’t Nocturnus love the space alien motifs too?  Even Suffocation liked junkyard machines coming to life for album cover and song title ideas.  Fact is, this isn’t as original as this sounds, but most bands don’t sound like Cosmic Void Ritual.  The devil must surely come from Apollyon’s Sun, and we need to permanently move there if we get more of this from that part of the universe.

The gods are smiling on us, Cvlt Nation writers and fans.  While other zines feature bands too modern or too blasé, we rip some alien ass with releases like Cosmic Void Ritual’s The Excreted Remains of the Sabatier System.

All while our speakers sing glorious music.  This may not be the most brutal, or the most avant-garde, but raw death metal is a god-send provided a band knows how to write and mix an album this good.  Top ten cassette releases of the year on your radar?  Include Cosmic Void Ritual’s The Excreted Remains… in that salvo of necro analog adoration.  I’m ready for space alien ass kicking.  I’m ready for it NOW! In this article:COSMIC VOID RITUAL, The Excreted Remains of the Sabatier System 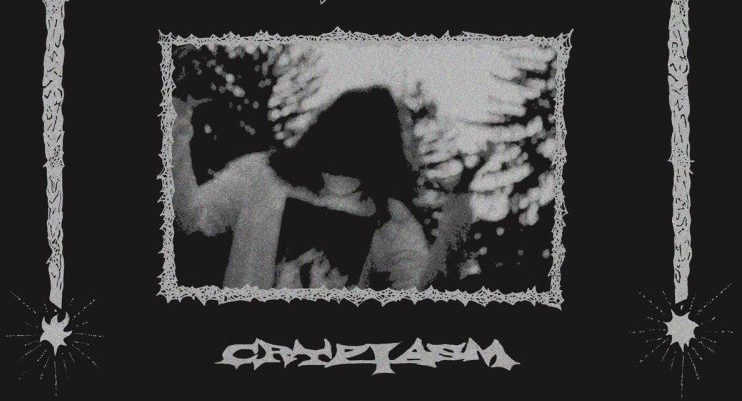 On the real, some of my favorite music comes out as demos that may never be released in any other format. Today we want... 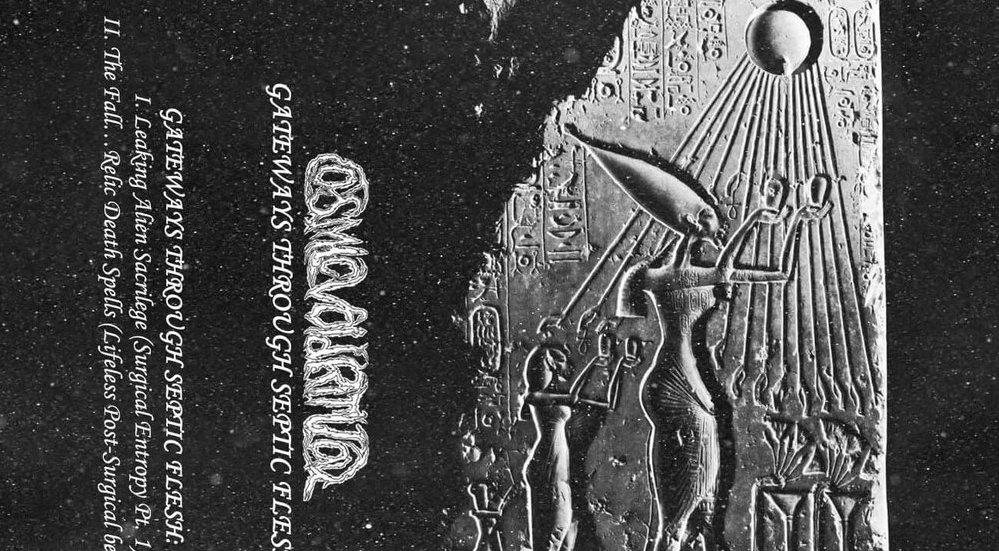 Unholy TRIPLE Fuck – this COSMIC VOID RITUAL tape Gateways Through Septic Flesh is beyond sick!!! They create the kind of Death Metal that...