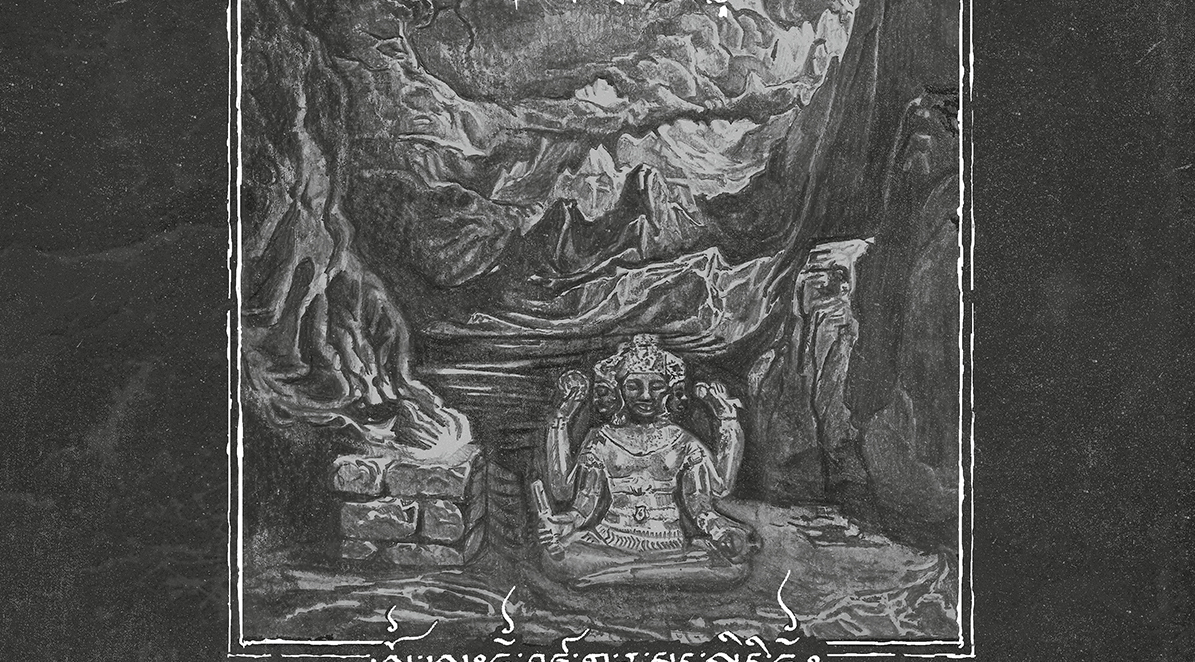 It may occur to some learned metal fans that French black metal band Aum sounds more like a band from Central Asia. In song titles and ideology, Central Asia appears to be a strong topic of choice for this mysterious French metal militia, just like Cult of Fire’s fascination for Hinduism oozes from the sodden gaps that span their dark Central Asian-inspired music.

It isn’t a worn-out theme to peruse the depths of an ancient religion that civilization as we know it is beginning to inundate. It’s a fairly buoyant subject, far from the miserable souls that worship the gods of ancient Sumer as bands like Absu and Melechesh do. Cult of Fire’s much publicized dip into the well of complex Hindu philosophy is as captivating as tech death metal titan Nile’s obsessive meanderings into ancient Egypt. Content is key in the world of extreme metal as it is for mystical ritual worship. It is therefore no suprise and with no preceding hesitancy, that I chose to review Aum’s Iron Bonehead Productions debut musical journey in the form of full-length album, Om Ah Hum Vajra Guru Padma Siddhi Hum, available soon in CD and vinyl.

To call this black metal might sound dubious at first. The first buzzing notes that emanate from the speakers might clearly sound like tremolo picking in classic black metal guise, but the sheer weight of the guitar riffs suggest that this is closer to sounding like black/death metal. With vocals that gurgle said Hindu philosophy in ways disparate from sacred music as we know it, Aum does intrigue with its splendid use of dark, near-buzzsaw effects on the guitar to great effect.

Aum varies up the tempos and the songs are usually lengthy in runtime. Rest assured, seven or eight minute tracks here are never quite noticeably long or drawn-out. In fact, the record is so much fun to intently listen to, that headphones might just be perfect for a night tuning out the sounds of city life for a place and time that only survives in the heart of the land that has spawned said religion. Imagine yourself bathing in the waters of the Ganges when listening to this, submerging into the water, then surfacing, rising from the river covered with atrament. In the heat of day, pedestrians will crowd the streets of Bombay, gasping in the heat like fish out of water, braving heatstroke and disease to make it past day to day living. This music brings you there – in the heart of poverty, hellish heat, beaten roads with potholes the size of craters, where lepers still walk the streets in a day and age where leprosy has all but vanished. Aum even uses some authentic Central Asian instrumentation on some parts of the latter set of songs. Is fascination for a culture far from an artist’s homeland fitting tribute, or travesty? It doesn’t really matter. With heartfelt music and conviction, any music can serve the purpose of achieving some musical expression of a deeper ideology. It is one that I enjoyed immensely, enough to consider whether Aum will make it to my end of year list for 2016. Should this article tickle your fancy for metal with content, make no mistake that any content pitted against mediocre music will not matter in the least. Aum, fortunately, scores aces on their Iron Bonehead Productions release. Explore seven ways to cease existing, as all seven tracks on this full-length album impress demonstrably.