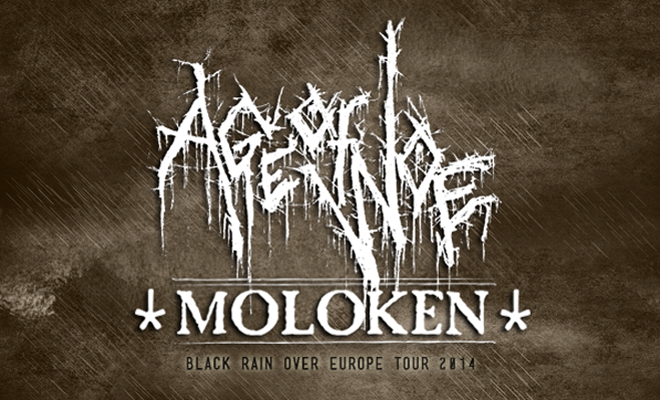 The Swedes are coming! Age of Woe just announced their upcoming May/June 2014 European Tour, Black Rain Over Europe, which sees them ripping through the continent alongside Moloken! These two bands will destroy your town and you won’t want to miss the terror they will unleash! Check the dates below, plus a rad video for their song “Born of Fire” off their split with 100 Years…plus check out our review of their debut Inhumanform! AGE OF WOE (Swe, Suicide Records/Give Praise Records)
Emerging from Sweden’s diy punk scene, Age of Woe brings us a unique mix of Entombed, High on Fire and Converge blended with the doomish sounds of bands like Neurosis with an edge of d-beat/crust aggression. Now If I haven’t already got your attention yet, you should definitely check out their debut album “Inhumanform”, which they released in 2013 and gave them top reviews from all over the globe. A great darkened hardcore metal band that has there diy ethics in the right place.

MOLOKEN (Swe, Discouraged Records)
With the addition of Moloken the Swedish town Umea can be proud of yet another great heavy band hailing from their ranks. Moloken brings us heavy, yes really heavy music that crushes you like a bulldozer. Their latest release “Rural” was met with great reviews and is described as “As if Gorguts met Isis for lunch and the two later casually partook in rough coitus”, great doomish atmospheric metal with an extreme blackened/death edge to it! For fans of Cult of Luna and Isis.