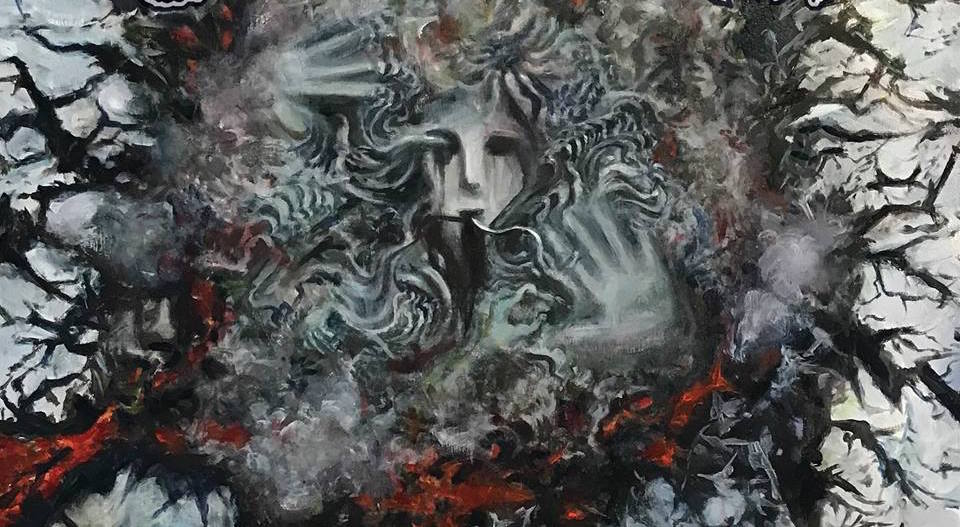 ÆNIGMATUM are a portland band that’s more interested in crafting memorable and face-melting songs than they are with genre-tags or riding trends. They play a blend of death and black metal that truly feels like a hybrid of the two genres as opposed to “blackened death” or whatever hashtag is popular on bandcamp this week. The production is clear and it’s warranted as these guys are really crafting riffs and parts that deserve to be heard. Though they never delve into tech-y noodling, it’s obvious that everyone involved is technically strong on their instruments. Honestly, I have spent the last few years feeling like extreme music is either trying to sound like it’s recorded in a swampy bog during a rainstorm or on the polar opposite end and basically fine-tuned to the point where each part might as well have been programmed.  ÆNIGMATUM live in between: they maintain atmosphere and soul and grit while also proudly displaying clarity and dextrous skill.

They’ve been on my radar since I saw their guitarist Kelly McLaughlin (Ex- Ascended Dead, ex-Blood Freak, ex-Blood of Martyrs) playing live for Blood Freak a year ago. I was immediately taken by his playing and sound, and made a mental note to keep an eye out for anything he got involved with. When ÆNIGMATUM’s Facebook page went up, I reached out to him in the hopes of getting a chance to preview the material and cover the group. As they are on the verge of releasing their debut album, I am very pleased to debut a killer track, “Lashed and Scorned.” I posed some questions to him about the band and the upcoming album.

What are the origins of the band? (please also discuss who plays what and any previous projects if you want to)

The band was born from our drummer Pierce (Pierce Williams- Torture Rack, Lord Gore, ex Blood Freak) and I wanting to do something with songs we had written independently years prior. Songs that were vastly different from what we were doing at the time with Blood Freak. We were a two piece for about six months when guitarist Eli (Eli Lundgren- ex Abiosis) joined with material he had written when he was a teenager. He and Pierce are long time friends and Eli was eager to jam after having just finished serving five years in the Navy and being isolated from other musicians. So there was a mutual hunger from all of us to give life to these old songs. Once we got the ball rolling more between the three of us and had booked our first show for Dec 2017, Brian (Brian Rush- Diabolic Oath, Treasonist, ex Blood Freak) entered the fray to supply the bass.

The sound seems equally based in a few different sub-genres, especially death and black. Did the band have a specific sound goal in mind?

We all sort of had a built-in direction, since we had the luxury of the material being already roughly composed. It was more a matter of bringing cohesion and balance to all of our different styles so as not to clash sonically. But no I cant say it was ever goal-orientated, more “here’s this, lets try this” and examine afterwards. That process has served to greatly reduce any rigidity or pretentions that I think all musicians have to some degree.

There has seemingly been a trend in both black and death metal towards murky production and wall-off-sound playing. Your stuff has a clearer production and very memorable and intricate riffs (without falling into noodling or tech). It’s actually pretty refreshing. What influenced this move?

The production of the album was conversely quite goal-orientated. We knew to give the intricacies as you say the definition and justice they were owed, we would need a sharp quality to the tones and mix. The challenge was to achieve this without sounding like the standard mechanized, over-produced modern metal band. Common tools of precision such as click tracks and guitar modelling were not utilized for that reason. Charlie (Charlie Koryn- Ascended Dead, Skeletal Remains, Funebrarum, Bloodsoaked) played a huge role obviously in the way he engineered and mixed the drums in particular to be tight yet pummeling. I would say we chose this route out of service to the parts themselves, feeling that we could let the instruments’ voices be better heard this way.

So far it has mostly been a matter of one member writing either a whole song or close to a whole song and submitting it at practice. We then will all learn the riffs in its skeletal form and offer arrangement or drum part suggestions. Once we can play it together front to back we begin augmenting our respective parts which can take months. I’ll then start doing improvisational vocals to get a sense of flow to write lyrics to later. There has been on occasion though some collaborative riff exchange sessions which has resulted in the completion of one of the songs on the album. But the whole process is insanely collaborative, which is why we credit the songs we wrote individually as written by ÆNIGMATUM.

What gear do you use?

The gear that’s used is all about balance and dynamics. Without getting into specifics like pedals and shit I mainly play a BC Rich Bich into my Blackhawk MJÖLNIR 100. The amp is huge, saturated and has a beefed-up Plexi quality. To fill in the space between my tone, Eli played through various amps on the album, mostly a Peavey 6505+. Live he uses a Balaguer Baritone Thicket through a modular preamp system by Salvation Audio and Jaded Faith, but is known to switch things up. Brian’s bare bones approach involves a SansAmp preamp. Pierce uses Mapex drums, Evans drumheads, Sabian cymbals, Gilbralter pedals, and Vic Firth sticks.

The name means many enigmas/riddles — how does the name fit the project for you guys?

I felt it appropriate with the vibe we tend to emanate, that we should employ more elevated, psychedelia-injected themes. The word enigma has always held a certain weight with me personally. It encapsulates to put simply, the unknown, as well as the strife and transcendence that is inherent with unknowing, since there would be no mystery without a searcher. I feel that idea resonates with the way the music and lyrics have the power to illustrate and imitate different areas of life and death: a series of enigmas.

The album is coming out on three formats through three labels; how’d that come to be?

Our friend Dylan Laviolette (Cemetery Lust, Nekro Drunkz, Hacksaw) of Headsplit Records was the first we thought of to release the cassette, which will come out sometime January. He and Pierce used to play in Compulsive Slasher back in the day and I’ve known him as a huge contributor to the Portland metal community for years. Putting out the CD late February is Victor Hernández Gil of Chaos Records from Mexico. We were contacted by him after he heard our self titled track from Charlie’s bandmate in Bloodsoaked, Jose Luis Rodriguez, to which we are grateful for doing so! Lastly Chad Gailey from Necrot and Mortuous will be putting out the LP sometime in the Summer with his label Carbonized Records. He had heard that Pierce and I had another project going and was interested in hearing it when we saw him last at Killtown in Denmark. We got ahold of him when it was mastered and that was that.

The logo and cover art are killer — who did them and how much did you direct the concepts?

Pierce’s brother Logan designed the logo. There was a lot of back and forward between him and us and multiple drafts were done until we were all stoked on it. The artwork was painted oil on canvas by Connie Wang of Icon Artistry. We gave her some vague, sparse direction but it was mostly just her asking to read the lyrics and hear the tracks and she just busted it out. Hails to both!

You’ve played some shows over the past year; is there a tour in the works?

There has been talk of doing a West Coast tour as our maiden voyage as well as maybe some out of town gigs. That is definitely on the horizon.