For centuries, American culture has been that of recklessness and carelessness for fellow humans; agree or disagree, the facts are the facts. I could give you examples until my dying day and never run out of the evidence of how we Americans have destroyed things for financial or other selfish gains. Capitalism has evolved and is the terror of our nation. I don’t hate America – do not take me wrong – I hate capitalism and I hate what it has done to the weak and how it has fuelled the riches of many. Our prison system is a prime example of capitalism; once set up for “punishment” and “rehabilitation,” it doesn’t do either. It’s a profit center. For those not in tune, a good small example would be the movie The Shawshank Redemption – it really is a prime example of how inmates were used and how the Authorities built an empire of wealth off them while crushing the common man’s ability to make a fair living for their labor. Most prison systems today aren’t any different than they were decades ago, and are privatized now, drawing big profits for companies and government in many other ways. It’s no wonder there are so many old prisons with stories and evidence of hauntings and other paranormal activity. There are still some standing and they are now attractions for tourists from all over the country…see, capitalism found other ways to continue making profits off even old and thrown away things. There are many famous ones and much bigger ones then the one here in York County. It is small and a very nice piece of architecture, although it’s ugly and riddled with dark secrets we will never even know about.

To visit and stand outside of the old York County Prison, you immediately feel sombre in the pit of your stomach. I can feel the blank stares of the souls trapped inside; many innocents were imprisoned on false eyewitness accounts, questionable evidence, and on the word of the wealthy or powerful. Prison sentencing back in the day was more about making the people of the community – or “Customers” of the wealthy – comfortable, so having someone locked up was more important than finding the actual perpetrators. It didn’t take 5 years to have a day in court like it does now – justice was swift, no matter how right, wrong, or accurate it was. Truthfully, you could be at the wrong place at the wrong time just living and end up on the wrong side of the law. Some may say this is still true today, even in the modern world with so much technology and surveillance – it’s amazing how that really hasn’t helped. Anyway, staying on the York County Prison hauntings – I’ve already laid out the possible and likely root causes of some of the suffering, starting with the Innocent, going crazy from the sounds of the cold concrete walls and begging off the other inmates. It must have sounded like Abruptum’s The Satanist Tunes, simply haunting and chilling. Standing outside here, I feel the uneasiness just as this cassette unleashes every small second that feels like hours of lost souls trapped within the prison walls, being torn apart. Pure evil spitting out deadly venom delivered in audio format. It amazes me when a “normal” man can live life without noticing what is here, what is dead that is living in our world, and not give any second thought of where they are going other than some false utopia.

Just like Abruptum force-feeds you pure unholiness, in the mid 1900’s there was a time when the inmates were fed roadkill, for real! Roadkill that the Police department would go pick up along many of York County’s roadways, tossing it in the cafeteria where it went out to the prisoners. I believe the authorities say this was only temporary and it wasn’t until after word got around they sort of admitted to it (or did they?). The prison was ridden with bedbugs and many other infestations that were not taken care of. It became over populated and prisoners were just tossed into padded cells together. Minorities were segregated, and who knows how mistreated they were – there are stories written about how bad some inmates were abused. Originally built in the late 1800’s, it was partially rebuilt in the early 1900’s, where by design the architect placed a trap door for hangings, carried out with and without the knowledge of the public. This is only a partial list of some of the truly sickening things done to prisoners; not just here, but everywhere. I hear people say inmates get more then they deserve and that type of nonsense, but not everyone in prison is a criminal, not every criminal is a menace to society, not every truth you believe is truth. And rarely are prisoners rehabilitated when they are released back into society; regardless of their crimes it’s a struggle. Again, I reference The Shawshank Redemption – many fight to get back into the prison system and many kill themselves; they are not weak people, they are broken down from the Prison system, the capitalist way. Today, the York County Prison still stands, rotting away, and was for sale for upwards of 3 million. It is currently squatted by homeless people who are willing to brave it and share space with the tortured souls who never left. Some reported hauntings include cries of pain in the night, prisoners screaming inaudible words and faces in the windows. I heard an account of someone being what they believed was slapped, which in my mind would be from a guard, not a prisoner. I have visited the grounds during the day and at night, and though I feel the weight of the suffering souls, I did not witness anything else. I do plan on going back at random times to continue to try and experience and explore the hauntings. Maybe I can dig up some liked-minded people and take over a Tascam analog 4 track machine, a guitar, an amp, and a mic and recreate the uneasiness of the air there.

Abruptum might be the most disturbing audio terror I discovered in the early 1990’s that moved me into a darkness I don’t think I was comfortable enough to leave. When in places of dark vibes, the audio of Abruptum is as fresh as can be. Many have attempted to duplicate and follow the formula of early Abruptum but it was never to be as pure, as dark, as evil and disturbing as Abruptum. Discovering the The Satanist Tunes from Abruptum was a strange experience, I don’t think I slept for a week thinking about what I had heard and understanding what it was all about. Simply an incredible time in metal music history that most slept on. And yes – are still sleeping on. There is nothing wrong with going back and discovering old music, especially during dry years where there aren’t too many new pieces to rave about. Discover Abruptum if you haven’t already. Not just the most recent version, but all the versions, all great! Plenty of bootlegs out there to be had as well; depending on how you feel about that you may or may not enjoy those versions.

Feedback, questions, and/or complaints hit me up paul@cvltnation.com. Got a place to explore that is dark in history? Hit me up and I’ll check it out. 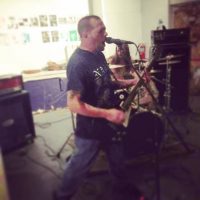