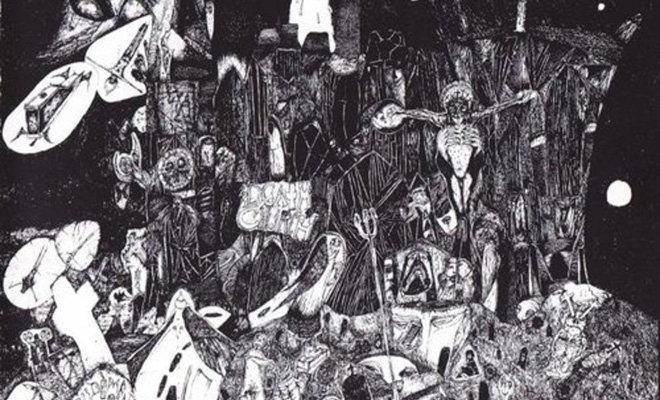 via The Run Out written by John Gentile

You will never understand everything in the Rudimentary Peni discography. You could spend a lifetime examining and evaluating the shards in the band’s work, feeling like you are getting closer to a fundamental truth. Even if you’re lucky enough to be able to establish a thesis or theory, the tiniest off-hand fragment in the band’s catalogue could instantly tear even the mightiest tomes to fibers. It’s what makes the band so fascinating.

Born out of the early English anarcho-punk scene, Rudimentary Peni never really seemed to fit in that scene, and to this day, don’t really fit in anywhere. Though they based their sound in grimy, three-chord smashing, they were equally likely to fly off on tangents, composing Wagnerian mini-movements, repeating a single musical phrase for almost four minutes, or leaving the instruments aside and using their own voices as backing noise. Their lyrics, often fixated on death, would alternatively take a position of fear or joy at the concept of being no more. Insanity, too, is given its due course, with the band both reveling in madness as well as trembling at all-encompassing depression.

The twist becomes even tighter when you look at the band’s background. One member, after becoming obsessed with H.P. Lovecraft, was locked up against his will when he thought he was a reincarnated Pope. Another almost died from a rapid, aggressive cancer at a young age. Yet despite all the dread, turmoil and chaos in their artistic and private lives, the band would still slip in ghoulish jokes between the lines of awfulness. That’s what makes Rudimentary Peni such an utterly fascinating, exceedingly tricky band. It’s never clear when they are describing in minute detail the sheer horror of death or when they’re just cracking a joke about having sex in the back of a hearse. They never let on. To try to make sense of everything in the Rudimentary Peni catalogue is a fool’s errand. To even try to form a basic outline of the band’s history can be daunting on its own. The facts are clouded by the band’s own mystique and misdirection. For example, on the turning screw that is 1995’s Pope Adrian 37 Psychristiatric, frontman Nick Blinko claims that the whole album was written while he was being detained in a mental health facility and while he thought he was the real Pope Adrian IV. It certainly could be true, but being that Rudimentary Peni investigated the concept of mental instability as much as they laughed at it, the whole story seems too perfect. But despite the mystery that cloaks RP, or perhaps because of it, RP are probably the world’s most influential band that almost no one has heard. You see their back patches at pretty much every punk show, but how many people have really investigated the shifting puzzle that is Rudimentary Peni? Why have they remained in the recesses of the collective punk consciousness for 34 years despite only doing about four interviews ever?

The answer to the second question is easy: Rudimentary Peni are frickin’ insane. The combination of Blinko’s gravelly, doom-laden, rumbling voice combined with the pounding, wall-sized rhythm section of Grant Matthews and Jon Greville sounds like death incarnate. Throw in lyrics about “fucking in our cosmic hearse,” or songs where Blinko just howls “POGO POPE! POGO POPE! POGO POPE!” over and over, and you have one of the darkest, funniest bands ever. Everyone from the Beach Boys to Charles Manson have flirted with madness in their music, but has any band so truly embraced the horror of insanity or so thoroughly pondered mortality?

BIRTH OF A MAGIT

The clouded genesis of Rudimentary Peni is partially due to Nick Blinko’s own mysterious background. The only known information from his upbringing comes from his own book, The Primal Screamer, which can be best described as a fictional autobiography. Blinko makes no allusions that the book is factual, but the details in it so closely mirror his own life, from self-producing a band’s early single, to working with Penny Rimbaud of Crass, to having a bandmate get cancer at an early age, that it’s hard to not draw some nuggets of truth from it. Based on The Primal Screamer, it would seem that Blinko was born September 4, 1961 and grew up in the English countryside. An only child, it is suggested that he spent a good time by himself wandering through the woods or spending time alone in the attic of his family’s cottage. Whether Blinko spent large amounts of time with a psychiatrist, as is suggested by The Primal Screamer is unknown, but the concept of mental health would be a recurring theme through both Blinko’s recorded output and his personal life.

While attending Watford Art College, Blinko found himself involved in the early British punk scene. He was a founding member of the proto-deathrock band S-Haters, playing guitar and synth. However, despite pushing the band to do so, Blinko left the group before they recorded any material, though he would go on to release that band’s first two singles on the Outer Himalayan record label, founded by himself and Martin Cooper. From there, Blinko formed his own band, the decidedly more avant-garde the Magits, who were originally called the Magit Turds. Membership of the Magits seems to be oblique, outside of Blinko and Cooper. RP drummer Jon Greville, who named the band, was probably their drummer for a period of time. Also, a mate named Alex Hawkes was in the band and may have played bass. Yet by the time of the band’s first and only release, the lineup had been reduced to just Blinko and Cooper, though they did practice and record in the garage of Greville’s parents. The Magits released the Fully Coherent EP in 1979, and some copies included paper dolls called “magits” made by Blinko. ully Coherent was the first release on the Outer Himalayan label. Together, the EP’s four tracks barely breach the four-minute mark. On it, Cooper reads Blinko’s dystopian poetry aloud while Blinko himself evokes the coldest possible sounds from a cheap synthesizer. The result is something of a UK version of Suicide. Yet here, Blinko would establish three themes that he would carry through his career. First, each track is beyond minimalistic, seeming to be sketches of sketches, which is clearly the point of the release. Each song basically has one lyric that sometimes is repeated and sometimes not. This strategy of burning a song down to its core meaning, so that the title alone conjures a reaction, is a device Blinko would experiment with and perfect as the RP catalogue grew. Second, Blinko began to deeply express his concept of mortality and disconnecting from society. Though it would become more pronounced later, his commentary on the human condition is fairly unique. Where most artists feared the end, or reflected on how all things are temporary, Blinko seemed to welcome oblivion, though at this point, his position was less overt. On “Detached,” Cooper moans Blinko’s lyrics, “We are under qualified to see right through the vacuum/ With our X-ray eyes/ don’t defy authority if you have the energy/ disconnect.” And while Blinko’s oeuvre is often described as one of pure doom, he actually buried messages of hope in the mechanic darkness. “Disjointed” ends with what can be described as a message of encouragement, or at least a warning, “Hiding from reality is not a good way out.” Third, Blinko’s sly humor, an oft overlooked facet of the Rudimentary Peni catalogue, crops up. “Detached” comments on Blinko’s isolation all while (likely) winking at its own dead seriousness. “Avant garde, avant garde, avant garde, avant garde, please stop at this junction, my body is a mess, rebuilt at this factory with minimal distress.” Is Blinko doing a Beatles-esque mantra with the opening line, or is he laughing at just how simple and direct the release truly is?

Despite the lo-fi, lo-cash approach of Fully Coherent, Blinko was able to conjure up a surprisingly wide range of textures from his synth. The whole release could have been part of the score of Blade Runner, as Blinko gets about as much mileage as he can from the electronic box. At one point, he focuses on a throbbing pulse which seems to draw from Bauhaus’ “Spy in the Cab.” At another, he fashions a slow burning whirlwind that adds an extra layer of desolation to the EP’s feel. At the end, he signs off with a TARDIS-like buzz. Was that another in-joke or just one of the instrument’s functions?

The Magits lasted perhaps a year before splitting up. The band did in fact record a second EP called A Pawn the Game with Hawkes playing on it, but that release was shelved and no one seems to recall why. Blinko and Greville’s lack of mentioning or reissuing the Magits’ material suggests that in retrospect, they don’t feel it was their best work. In a way, that’s a shame because aside from the obvious Suicide comparisons, there doesn’t seem to be any other mega-lo-fi, ultra-minimalist synth releases from England during, or even before, that period.

For the rest of this very interesting feature head over to The Run Out Now!

Advertisement. Scroll to continue reading.
In this article:rudimentary peni, slider 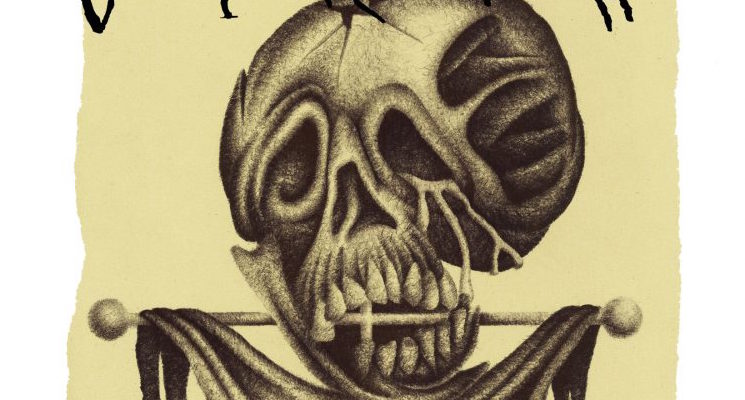 What do you know about BLEACH BIRTH? Let me tell you that this band rules and they are able to worship Rudimentary Peni Death Church-era... 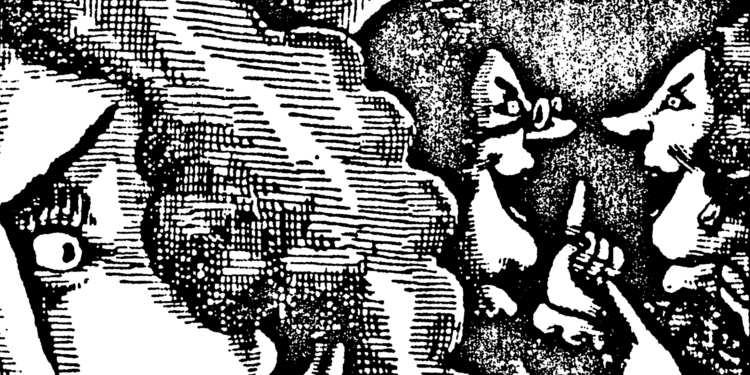 Far From Your Contamination: An Interview With Sad Lovers & Giants

For the true, Sad Lovers & Giants is one of THE bands when talking essentials in goth and post-punk. Yet, despite your cult following, a...