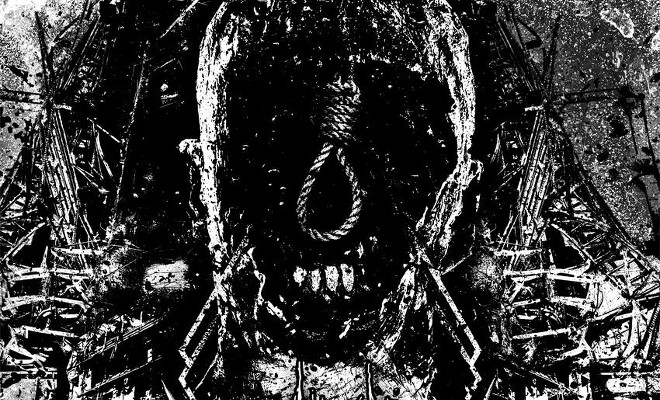 On their second full-length album, Louisiana black metal bruisers Barghest return with a huge fucking barrage of evil and destruction, with a pure and unmistakeable statement of complete filth and with a black metal craft that is so swollen with ruin, decay and inhumanity that it is possibly one of the best and most ruinous blackened metal albums of the year. The Virtuous Purge is grand in the fact that it is also a hard to classify black metal album, something which stands completely on its own for a number of different reasons: the unusual production choice, the blending of various and often antithetical styles and metric aesthetics, and the hard to define attitude in performing their uber-ugly craft, which seems to be far more rooted in punk and hardcore than your average black metal band. In comparison to their debut self-titled album, The Virtuous Purge is a far more focused, concise and compact-sounding release. It is aided by a far more crispy, rounded out, and bombastic production than in the past, a trait that really enhances the band’s low end, bringing the bass and drums to the forefront to thundering effects and therefore making it an unusual black metal release, something that sonically pretty much doesn’t exist anywhere else, and which could potentially be considered as a new breed of black metal, a crossroad of sorts where black metal,  raw sludge, death metal and extremely belligerent and annihilated punk aesthetics collide to devastating effects.

The band has also further enhanced its doom metal inclinations brilliantly, venturing in some extremely slimy and comatose doom breakdowns that sometimes even collapse into drone parts, just making shit all that much heavier, ugly and hard to classify. And all this doom-infested razorwire blackness this time also comes with unmistakable death metal striations, something that was not as apparent in the band’s background as it is in this new opus. The vocals belch out to a frightening low and cavernous grunt, the double-bass kicks into fucking overdrive, and the guitars design frightening and disembodied swarms of deformed and painfully downtuned thrash riffs that bring to mind the brutal and decaying darkness of blackened death metal bands like Dissection, Impaled Nazarene and especially their Louisiana blackened death peers Goatwhore. But make no mistake, to the core The Virtuous Purge remains still the blackest of black metal, a blistering and decaying blast of mauling darkness that could give a fuck less about gore and guts or other purely death metal-oriented bullshit, and which is obviously more inclined to explore the inhuman depths of the most disheartening misanthropy, hatred and darkness.

The Virtuous Purge is at times a hard album to pin down and explain concisely. It is shrouded in a scummy and impenetrable cocoon of grotesque ambiguity, and you can tell that this record was possibly birthed in total seclusion and isolation. It is in fact really hard to tell from where exactly these guys drew their primary inspiration, as none of the most obvious influences they purvey ever take over, but are rather appear to be meshed together, dominated by the introvert personality and purely internal vision of the band. Words are expendable when attempting to describe works like this that are dominated by such personality, so get into it, just press play and let it mutilate your senses – this album absolutely fucking slays!