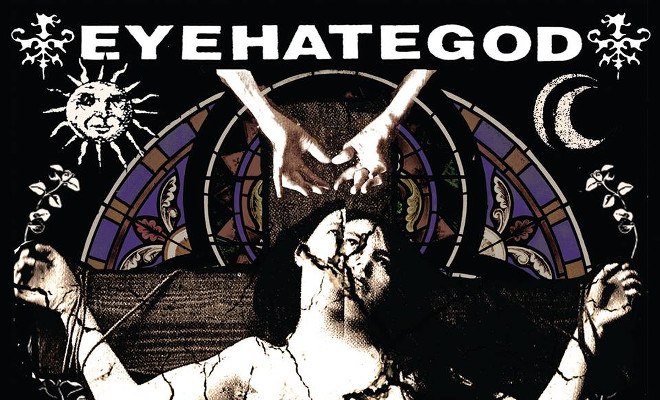 Personal struggles, internal turmoil, side projects, the rise of DOWN and then Hurricane Katrina ripping through New Orleans (and consequentially through the band itself), threw pretty much any plan the band at at the moment out the goddamn window, plunging it into stasis and turning it into some kind of legendary chimera who would reconvene from time to time for some sporadic and scattered touring activity, but not much more. Even without studio activity, the name of the band has nevertheless echoed and resonated around the globe a million times in these fourteen years. Old milestones of modern downtuned metal like Dopesick and Take As Needed For Pain have kept spinning on million of record players worldwide, even if the band has been inactive for over a decade – and to all extents, today it’s even impossible to separate the term “sludge” from the name of the band. In fact, simply put, EYEHATEGOD “ARE” sludge, and sludge IS EYEHATEGOD, there is no way around it. That said, it is apparent that their legend has just gotten bigger while the band has been away from the scenes, and their inactivity has simply enhanced the reputation and glory of a band that is now followed by thousands of loyal fans around the world, drooling for new music to be recorded or for the band to come to their town to pillage their stages and wreck havoc on their ear drums. EYEHATEGOD today are simply a band that for a million reasons is now revered like pioneers of sludge metal and doom, and this new record, at the end of the day, just confirms this simple fact: it is an album that just reeks of glory and and that is effortlessly iconic. It is that, for all these reasons, this self-titled album feels timeless, memorable and completely legendary. Simply because it is EYEHATEGOD doing what they know how to do best, at the top of their game and with completely recharged batteries, thrusting forward and hurdling towards the listener their massive and iconic waves of caustic slime and enormous clouds of toxic smoke with absolute power and effectiveness. In some ways, this self-titled album is also a return to their ancestral roots for EYEHATEGOD. If you pay close attention to tracks like the pummeling opener “Agitation! Propagnada!” or the vile and suffocating  hammering of “Framed to the Wall,” you will hear their early punk roots resurface as heard on cornerstone early releases by the band, like In the Name of Suffering, when the band’s Black Flag and Poison Idea influences were still very obvious and a dominant trait of their sound. On the other hand, it is also safe to say that EYEHATEGOD is a band that plays music that comes from the gut and from the gutter. Their music is the voice of an internal state, of a distorted and ruined view of one’s surroundings. It is not music that is trying to cause a stir or revolutionize anything. Their music has always been about exorcising a wide array of sorrowed and degraded human emotions. It is for this reason that expecting the band to “evolve” somehow on this release, even if fourteen years have gone by from the last one, is just dumb and totally out of whack. There is no evolution here, just enormous piles of integrity, guts and disdain, just as there have been in the entire span of the band’s career. That is why these sewer-ridden riffs, these enormous and pounding drum patterns, these hated and bile-encrusted vocals, and the absolute crushing and corroding heaviness of the music has catapulted us back to the early 2000s when the band was at the top of their game, entwined with the most negative and hated human emotions you could possibly think of. That is also why this album, overall, just feels so fucking classic and timeless.

The bottom line about this awesome record is that it leaves no ground for doubt or disaffection. There is nothing about it that could possibly betray a hardcore EYEHATEGOD fan or cast any shadow on the integrity of the band. Everything we have loved for a quarter of a century about this band is all here, shimmering and glowing with more intensity than ever before: Mike Williams’ hated bark, injected with his bleak and hopeless poetry, is all there; Brian Patton’s and Jimmy Bower’s dual slime-machine guitar work made of smokey, rotten and heavy-as-fuck riffing is all there, and if anything, is even more focused, creative and heavy than ever before; and the rhythm section driven by Joey LaCaze’s (R.I.P.) thundering tom and cymbal work is more pounding, driving, destructive and heavy than ever. This album has it all: it’s a classic EYEHATEGOD record, it’s their best work heard since Dopesick hit the streets some twenty years ago, it’s a splendid return to form for the band, and overall is destined to be one of the best sludge and doom albums of 2014, by far. The legend lives on!