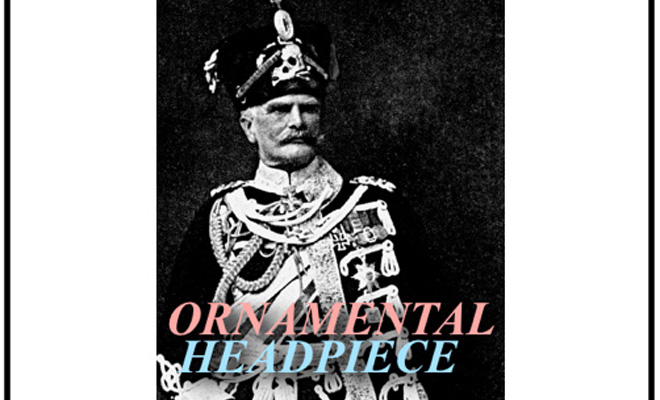 But man, Ornamental Headpiece’s punk-meets-black metal absolutely rocks my boat. There are touches of Nachtmystium if you would believe it, although I’m sure the band didn’t intend to use them as an influence. The psychedelic touches sound absolutely perfect on this release. All-out blast, mid-mosh punk, then let those notes ring like it’s a hypnosis session.

Members of A Pregnant Light, Aksumite, Citizen and Freedom comprise the band. If you thought you hated supergroups, think again!

The album starts with a war clip, then it’s utter annihilation for a while. When the band hit the punk riff, it sounds right on track, then the strings beguile you like a pendulum, shifting, until you’re lulled by the decrescendo. After that, the drums pick up, and you’re headbanging like a crazyperson again.

The next track, “Boots On The Ground,” has the best psychedelic riff on the album. The vocals never go clean, though. In fact, your Grandma might think she’s caught on the wrong side of the tracks after she hears it half-asleep.

The third track, “Candle Holders,” has the best punk riff on the album. It sloshes and grooves and sounds so original, metal heads may have to re-think Maryland Death Fest in favor of CBGB’s this year.

The last track is a blast-fest for the ages. The guitars let the notes ring out and the feedback is good enough to make your ears bleed.

Riffs aside, the songwriting is stellar, and the lyrics might be unintelligible, but its scream-along-in-the-shower-stall worthy, should you tempt yourself into listening to this in the shower, planning for a trip to the emergency room with a cracked skull.

Really, the pigeonholing types can’t call this straight-away black metal, and they sure can’t label it anything that makes sense. There are elements here that work well together, and if you haven’t listened to extreme metal lately and have a hard time thinking Nachtmystium can go punk, try Masks of Ash for a Total Recall session. You’re sure to love it!