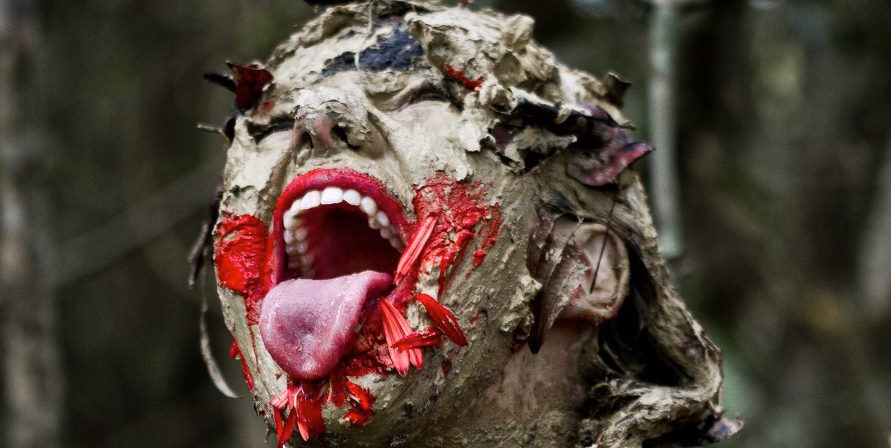 When in high school, I had some art classes in option. My teacher used to give me some pretty enigmatic advices back then. like he knew wich artists will move me, but I had to do the effort to discover them. Hans Bellmer was one of those. « Die Puppe » was the first schock, but I’ve ran into his drawings. The studies for «his sculptures have this organic feel, more disturbing than the the result that they were meant for. As everything was never ended, but had thousand lives Obsession with body in its vulnerability. Strongest and above any mortal consideration. Celebrating. He’s an example of letting go, of reinventing, of born again. He puts himself in danger, bluring his senses. Didn’t have the chance to see one of his performance in live, only his sculptural exhibitions, wich are another smash in the face. Primitive and pure. No bad intentions, just a violent mirror.

I discovered his work through the band Overmas. He designed the « Affliction, Endocrine…Vertigo », back in 2005. I was starting my studies in graphic design back then, and liked the nervous shapes, highly contrasted, was modern at that time. So I’ve been running through his work, and discovered his book called « Crève » (french word for « Die »), I’ve been imagining all that rage in those inks, but felt a strange mix of calm in those tempests of black. He raised the bar very high in the years, I bought his last two books, was a long time I haven’t take the time to just sit for hours watching every details of his illustrations. There is a world in it, there was still that calm invaded me. I took contact years ago, to get tattooed by him. I wanted a tattoo of my strongest phobia, on my chest. It didn’t happened. Overmars splitted too. On the same day, they released, together with friends a common poster. And I met a member of Overmars. Things happens for a reason in life, in my opinion. I felt signs. I still have that phobia. I actually might say, the film « Tetsuo ». Probably the biggest impact a movie had on me. Together with Salo from Pasolini and The Seventh Seal from Bergmann. Cinema had a strong impact on my childhood. I think I’ve seen movies that I wasn’t in age to fully understand. But, when « Tetsuo » crossed my eyes, I’m not sure I understood what Tsukamoto meant. But I’ve been travelled but it’s rage. I discovered it again when I was a teenager. A french DVD edition was released, together with another movie. I never watched the other movie from him. I think I’ve never watched entirely one of his other titles. This movie made me understand that, if you are burning inside, no matter how, go for action. A manifesto of freedom. Part of my inner philosophy of going for it, trying, doing my best, failing, but trying again. I don’t follow any religion, or dogma. I believe in signs and symbols. When my body is in alert, I see it as a « non explainable » force, that gives me advices. Lately, a part of a tooth fel down, when I was litteraly not doing anything special for breaking it. And I was crossing a stressful moment. In France, we have an expression when you’re failing, « se casser les dents », « breaking your teeth ». Something was giving me an alert. That I didn’t listened. And I actually failed in a way. Since I’m a child, I’ve been in awe in front of ancient cultures, ceremonials, and by extension, their arts. The connection between life and death, the rites. All of those documented rituals and ceremonies seemed to be for appeasing their suffering. But their blood was running over, it was all about suffering, being in a batle, washing in ashes. A strong notion of sacrifice, to find peace somewhere else. The passages. I had my first scarification around fourteen. For the same reasons. I had a passage to make. A rite. If my emotions came to peace again, after something I’ve been through, my body had too. I wanted to mark it. To never let that happen again. That altered state, that reach for something I cannot really put words on it. After the first Treha Sektori show, I felt a time that seemed an eternity, but was actually a second, of letting my soul out. A feeling that I still cannot explain. When I watch images, artefact of rituals from different civilisations, I look for the eyes, thinking of what they have feared, and how it disapeared in those cermeonies. That look, when you feel you can plant any spear on any heart. Nothing will stop beaten. Lately, I’ve been interested a lot in Vaudou ceremonies in Bénin. Could also have been Aghori Sadhu, Selk’nam, vegetarian festival of Thailand, Nazarenos from Semana Santa in Spain,