1817, the American South. Forty miles north of Nashville, Tennessee lay a small farming community on the banks of the Red River. A family is besieged by an invisible force with the power to speak, move objects, and even harm the living. A mere amusement to many, a supernatural curiosity to others, and to some a terrifying tormentor. A haint of the Old South, a demon down in Dixie. The Bell Witch, an entity of unknown origins laid a reign of terror over the Bell family for four long years before vanishing as mysteriously as it appeared. John Bell, along with his wife, four sons and daughter Betsy lived a quiet life on their family farm just outside the town of Adams, Tennessee, in the northwest corner of Robertson County. Their tale of terror began with unknown creatures lurking in the woods. An impossibly large bird near the fields, a great black dog on the road. Betsy witnessed an unknown girl in a green dress swinging from the old oak tree. Then a series of odd and unexplained noises began around the family and the farmhouse. The exact beginning of the haunting is hard to date, due to so many of the early events being explained off as odd, but natural. Bumps in the night and strange scratching sounds were thought to simply be animals outside and the wind blowing the pear tree against the wall outside. How long this went on is unknown. What is know is that it was a Sunday when the noises moved inside the house. The sounds of rats gnawing upon the bedposts awoke two of the four boys. The lighting of a candle would halt the gnawing and it would resume with the darkness as immediately as it would stop. Attempts to find the rat were fruitless. Night after night, the sounds would move room to room. Then new sounds. The sounds of stones dropping on the floor, chains rattling room to room,  and sounds of someone choking or being strangled. Bed covers were pulled off the sleeping children. Then the real horror began.

Invisible hands pulled the children’s hair. The Witch soon turned special attention to young Betsy, a teenager at the time. She would regularly be slapped in the face, her cheeks turning red. She was pinched and stuck with pins, her belongings would go missing more than the others. She, along with her father, became the main targets of the witch’s ire, while other family members, like the mother, were treated with respect and even affection from the spirit.

After a neighbor’s visit, tales of the haunting spread throughout the community.

Neighbors came from far and wide to talk to the spirit and see the poltergeist powers at work. They would ask it questions that could be answered in numbers (How far is the church from here? How many cows are in the field?) and receive the answers in knocks on the wall. It was reported to be correct without exception in all of its answers. Lights appeared, flashing through the trees, across the yard and through the fields.

And then The Witch spoke.

At first only low, broken, whistling sounds. But soon the disembodied moans grew in strength, and became a human voice, and clearly feminine. Naturally, someone soon asked, “What are you?”

“I am a spirit. I was once very happy but I have been disturbed.” he voice, when asked her name, replied that she was “Ol’ Kate Batts’ witch.” This would lead people to refer to the witch as “Kate,” a name the spirit was said to be fond of. The Witch was referring to Kate Batts, a neighbor of the Bell farm  with whom John was said to have a vicious dispute over the purchase of a slave. Kate Batts was said to be eccentric and odd, leading the community folk to rumor that she was in fact a witch herself, and the Bell’s supernatural troubles were furies beset upon them as revenge on John.

The spirit also claimed to be many things and have many origins, contradicting itself many times over. It said that it was the spirit of a Native American, angry at the disturbance of its grave, saying that the farm was built on sacred burial ground. Kate claimed she was the ghost of a dead man who had buried a treasure on the property, leading the family on a short treasure hunt before cackling at them for their stupidity in believing her tale.

The haint would haunt the family until 1821, self prophesying her return seven years later. It was said that she did in fact return seven years later in the form of the noises and pulling of the bed sheets, but only for a short time before leaving the Bell family forever. However, the Bell Witch did not leave the people of Tennessee in peace. She became a local legend. She evolved into a  scapegoat to blame for any and all paranormal happenings. Two men were prosecuted for murdering a fellow laborer. The murdered man, the defendants claimed, boasted to have the power of witchcraft, and the powers of the Bell Witch himself, which he would beset on others at will and bewitch the two men. The nearby Bell Witch Cave, a local legend in its own right, became associated with her and her powers, as it itself is rife with tales of hauntings and strange happenings, including a sighting of a woman sitting on an impossibly high cliff, strange sounds and voices emanating from the cave, and even people being dragged out by their feet. Legends grew around her. It is said that the eventual President Andrew Jackson paid a visit to the farm, witnessing Kate’s power himself. The legend of the Bell Witch began with the torment of a family, but grew into a statewide fervor of interest. Kate’s station as local lore grew beyond even her own attested power. Much of what is known about the haunting comes from a book published in 1894, seventy-three years after the initial haunting. Historians contest that Jackson never came anywhere near the Bell property. Records reflect that John’s dispute was not with his neighbor Kate, but rather her brother-in-law. As apocryphal as the Witch may be, what is known is her lasting effects on the region and greater consciousness of our culture. The two men on trial for killing a man who claimed to bewitched were acquitted. Some historians trace the cultural motif of the haunted house built on ancient Indian burial ground back to the Bell Witch haunting, a motif that was seen in stories from the  Horror all the way to Scooby Doo. Was there a Bell Witch? Did a real witch curse a man and his family? Did ghosts rise from the grave and descend upon a small farm in rural Tennessee? We’ll never know. The Bell farm is long gone, but the Bell Witch Cave is still there, open to visitors and still a source of paranormal claims, inviting doubters to come down to see if there really is a demon down in Dixie. 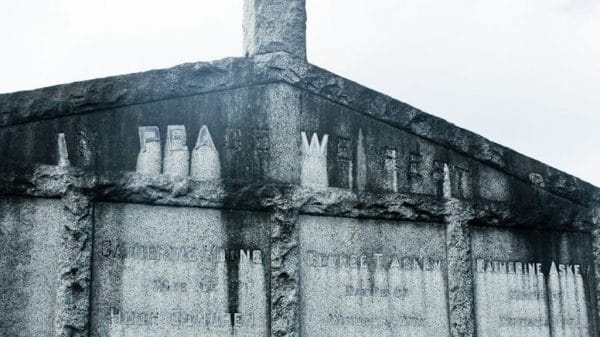 Wandering in Cemeteries? Find the meanings behind Tombstone Art

We live near a huge graveyard where my grandparents’ ashes are scattered. Once a month, I like to walk to their little rose garden...