There’s beauty to be found in devastation, a faint glimmer of hope sparkling ever so slightly through the wreckage. It’s not always to be seen though, but often it’s there and if you venture into the largely dark world of Black Boned Angel, you could just find it. On first encounter, the New Zealanders’ drone/doom is corrosive and unwelcoming, almost appearing soulless, such is the coarse and abrasive, and relentlessly dark destruction they dwell in with each protracted note. However, at the same time, there’s that glimmer.

After more than ten years, the project helmed by Campbell Kneale, which would eventually become a trio adding James Kirk and Jules Desmond to the fold, the purveyors of drone have decided to pull the curtains on the entity that is Black Boned Angel, appropriately bookending their sonic plague with this final record – The End.

Divided into three distinct parts, The End is an hour long journey into the abyss, wasting no time pulling you into their world of aural malady, with a cacophonous and earth-shattering tremor of monolithic proportions. Guitars almost shouldn’t be wielded with detrimental force like this, and while Black Boned Angel unfurl a devastating timbre to begin this farewell, their modus operandi still never feels overly chaotic. Rather, these three sonic blacksmiths of the low end are forging a well thought out, measured and cerebral bout on the senses.

Part One exhibits Black Boned Angel at what might their most heartlessly heavy yet with riffs that drone with ease but also take pickings from even conventional doom pockets, all the while the din is soon met by searing, discordant noise, much like a vuvuzela from the pits of hell. That is until Part Two.

The band withdraws into another world it seems as a lone guitar trudges along ominously, soon exploding into an array of synths and keys that combat the gruelling heavy doom. This is the glimmer of beauty fearlessly shining through the wreckage left behind by Part One and Black Boned Angel fearlessly shows a whole other side to their art.

Despite its apparent simplicity to the newcomer listener, Black Boned Angel’s records are incredibly layered with ideas and, most importantly, atmosphere and none more true than with this final slab of dissonance.

Part Three returns to the coarse hail of drone that characterised the opening part and truly begins a new homeward journey to end this record in, simply stunning fashion, adding lush wailing female vocal textures that are almost operatic at times, which somehow pierce through the usually impenetrable wall of dissonance. Before you know it, you’re in Black Boned Angel’s throes of drone once again until the wreckage decays and the glimmer wilts.

For one last foray into the abyss, the New Zealanders have possibly dragged us so far in that we’ll never see the light of day again. This isn’t going out with a bang, rather a colossally destructive and soul destroying crash.

The End is released February 19th by Handmade Birds. 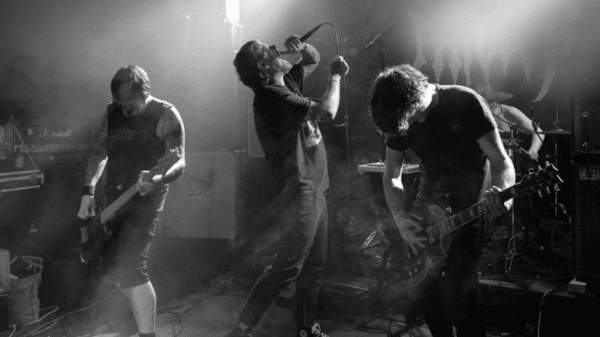