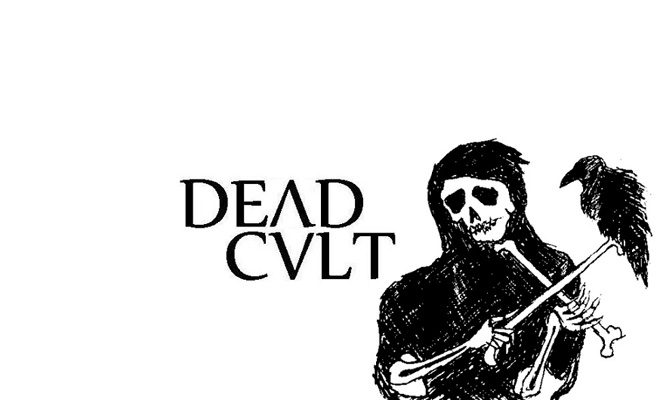 Dead Cult may be the youngest band on the resuscitated All the Madmen Records, the anarcho-punk label founded by The Mob in 1978 and resuscitated in 2012 after a nearly 25 year hiatus. Dead Cult‘s 2-song “Ghosts Still Dance” 7″ is being released in June by All the Madmen — undoubtedly an honor for the younger Portland, OR based group.

And a great 7″ it is! It’s difficult to believe that it was over 2 years ago that I interviewed Dead Cult — which CVLT Nation carried here — after hearing their demos, which founding member James Barker smartly posted onto Youtube. One of the demos included a pretty great cover of The Mob’s “Witch Hunt,” as well as several other original tracks. This included the excellent “Progression of Fear.”

The first song on “Ghosts Still Dance” is the title song — a haunting, mid-tempo postpunker, musically reminiscent of “Juju”-era Siouxsie and the Banshees. There are a few aggressive moments in the song that would seem out of place in something “Juju” era Siouxsie, however — but it all serves to tie the song’s message about the destruction of indigenous peoples to the band’s roots in punk. Singer Tawni’s vocals are at once impassioned and determined, finely honed. What struck me immediately about the song was how much more “mature” Dead Cult sounded from their demos of over 2 years ago. The band has definitely developed and has caught onto a tone of quiet ferocity in their sound that serves them well.

Dead Cult’s 7″ can be (pre-)ordered from All the Madmen Records here.

The song on side b, “No Religion,” is a foot-tapping mid-tempo punk rocker squarely in the vein of more recent bands like Arctic Flowers, Moral Hex, Annex — or older bands like Lost Cherrees and The Dead. The linchpins to the sound are 80s UK peace punk and the early gothic rock that was clumsily called “positive punk” back in the early 80s by music journalists in England. In fact, bassist James described Dead Cult’s sound as “Anarcho Goth Rock.” Singer Tawni explained: “For me, it’s Anarcho that influences me beyond anything else. James has the ideas for the more Goth-influenced songs, and I’m thrilled with how they’ve turned out. For me personally, I’d have to say bands that have influenced me the most are The Mob, Omega Tribe, Icon A.D., Alternative, Anarka and Poppy, A-heads, Zounds, and Poly Styrene will always be the first woman in punk to BLOW my mind. Always an influence.”

The 4 piece, dark, guitar-driven sounds of Dead Cult do straddle the line between postpunk, purist punk, and gothic rock in exactly the same way that early 80s bands like Blood and Roses did. The result is an earnest and compelling hybrid of smart guitars, dance-friendly percussion and tempos, and intelligent lyrics/songwriting. “Ghosts Still Dance” is a fine addition to All the Madmen’s amazing roster of anarcho-punk releases, and it’s doubly good to see a young American band picking up the torch of the label’s legacy and sounding as perfectly as Dead Cult do on this release.

Dead Cvlt will be playing with The Mob on their forthcoming West Coast US Tour: I need strange music for these strange times, and lucky for me I get a lot of it crossing my desk! How about wailing...