A ghost is haunting the forests of Brandenburg—the ghost of Communism.

Berlin and its surrounding areas are great for historical urban exploration. Berlin was not only the capital of the German Empire and Nazi Germany but also the front line of the Cold War—and was thus of the highest political and military importance throughout the 20th century. Because of that, a heavy military presence was maintained in the areas around the city at all times, first by the Germans and later by the Soviets. What’s left from this era are the abandoned military bases that now litter the countryside around the German capital—such as the one in Krampnitz, located by a lake between Potsdam and Berlin. Following the defeat of Nazi Germany, both the Allies in the West and the Soviet Union in the East took over the bases left behind by the Nazis and continued to use them. The Soviet Union set up shop in the German Democratic Republic (East Germany) until both ceased to exist in 1991 and 1990, respectively. The Russian Federation, the legal successor to the Soviet Union, evacuated the remnants of the former Red Army (which was trapped somewhere between anachronism and irrelevance) between 1991 and 1994, leaving behind a host of bases devoid of all purpose other than decaying into oblivion. The military base in Krampnitz was first established as an elite equestrian school for the Wehrmacht in 1937 and was in use until 1945. That same year, Krampnitz was taken over by the Group of Soviet Forces in Germany, which called the base home until 1992. The site has been abandoned since then.

Visible from the highway, the area is completely surrounded by a massive wall, and the visitor can’t help but notice the massive brick tower sticking out, definitely from the Nazi period. My good friends Mike, Ruben, and I stood outside looking at the fence while we finished our beers. It is safe to say we were all overwhelmed by the desolated sight and the total silence, which was only interrupted by the cars driving up and down the road. Krampnitz is something straight out of a horror movie. Behind the rusting fence, which is menacingly adorned with barbed wire, stretches a long avenue. The road is overgrown with weeds. To the left is the old gym. To the right, the aforementioned tower. A few houses shyly hide behind the trees lining the avenue, which gave our otherwise gray day a bit of color. I took the last sip of my Feldschlößchen as we walked up a little private driveway to see a building whose architecture was just typical for the late 1930s. Though the main entrance of the building was bricked up, the one in the back was open thanks to the friendly destruction of some other explorer(s). Inside, majestic halls rot away, the paint peeling and the wooden floors decaying with abandon. Yet, is still not hard to see that that place used to basically be the shit if you were in the military—be it the Wehrmacht or the Red Army. The streets of the base are lined with endless rows of purpose-built houses, which are adorned with symbols of Soviet military might: shields, swords, missile-launchers, red stars. Little murals, slogans, and symbols can be found everywhere. In the end, the Soviet soldiers stationed there were also to be bombarded with propaganda.

Roughly in the center of the complex is a massive building from the Nazi era that features symbols of the different German states from that (and our) time above its windows. On the side facing a little metal podium, probably used to conduct roll-call, the names Bayern, Baden, Württemberg, and Preussenfeatured prominently on the facade of the building. Next to (and partially under) this building is a large bunker, and next to it a factory. At the end of the base is an area clearly used for storage. Not a lot to see there as all those buildings have collapsed, but the way back leads through somewhat of a jungle lined with rotting buildings. People spent many years of their lives there. Kids went to school there. The cafeteria where they ate, the gym where they worked out, it’s all still there. I wondered what their daily lives were like. The place seemed endless. Nazi Germany and the Soviet Union were idealized as something transcendental—yet neither one of them exists anymore. What’s left from the military might of these two totalitarian regimes in Germany are just ruins. Buildings that were erected to house large armies and arsenals now stand empty as their former grandeur crumbles into debris and gives way to squalor. Ruins are the embodiment of temporality, and seeing decaying buildings once conceived to represent oppression is just a reminder that everything created by politics and power is ephemeral. Empires do crumble, and the base in Krampnitz is one of the many reminders of this. Hope you liked the article and the pics! This article was a collaboration between Between Distances and my good friend Ruben, the talented photographer who shot all the amazing pictures in this article. Check out his website here and follow him on Facebook too. In this article:Berlin, Russia, Soviet 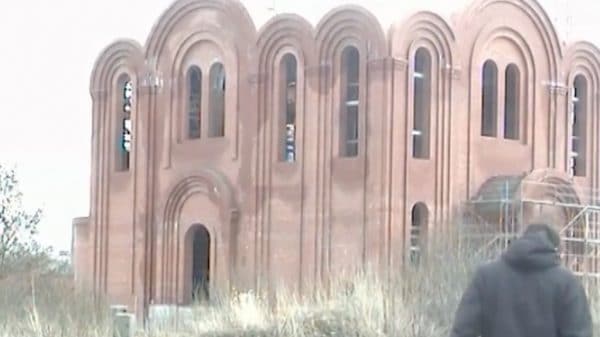