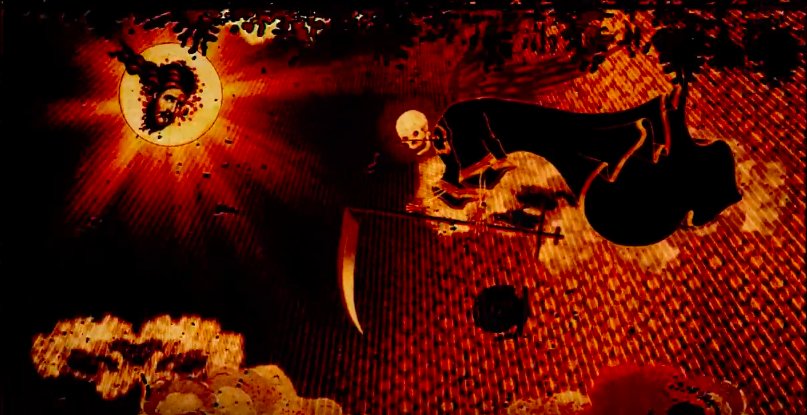 Black metal has historically looked to the past to tap into the aesthetics of ancient traditions. The Second Wave bands such as Emperor, Burzum and Darkthrone looked to Norse mythology for much of their inspiration with regard to imagery aesthetics; likewise, bands on the Southern California-based Black Twilight Circle label, look to their pre-Hispanic, Mayan roots to guide their ritualistic approach to black metal.

Poland’s Batushka, whose debut album Litourgiya was released in 2015 on Witching Hour, take a slightly different approach. Where most black metal looks to Satanism, the occult or paganism for their aesthetic model, Batushka adapted the concepts of the Great Schema in the Eastern Orthodox Church. The Schema Monk is a rare level of devotion and dedication to monastic life where the monk must be willing to be literally nailed to the cross, to be “crucified with Christ.” Poland, like most of Eastern Europe, has been heavily shaped by religion, with the dominant group being the Catholics. As expected, controversy follows Batushka. They had t cancel a show supporting Behemoth in Belarus due to threats from extreme orthodox groups that concertgoers would be beat up or killed if they went to the show; on the flip side, some of the less free-thinking black metal fans have questioned whether or not is “acceptable” to listen to Batushka due to their “Christian” image.  The name “Batushka” simply means “Father” and the album title “Litourgiya” simply means “work” or service. Aside from the inversion of a cross and the blotting our of some iconic Christian faces, there is little that is blasphemous depicted in the band’s imagery.

Batushka is the reflection of Кристофор, the mastermind of the band who choses to remain anonymous. The question is whether or not Batushka are Christian or are using Christian imagery as a cultural inversion is also a mystery; Кристофор is deliberately evasive in interviews, stating that everything that is needed is in the lyrics and the imagery of the band. Either way, the message boards are ablaze with discussion and controversy putting the band at odds with both sides.

The new video for the song “IV”, produced by Zev Deans demonstrates the striking atmosphere created by the band.

How did you get involved with Batushka?

Jaci Raia, my fiancé has been responsible for getting me back into heavy music. She has the most phenomenal taste in music and she played the band for me. It’s an incredible album that came out of nowhere, no one knows who they are.

After Transylvania, I land in Warsaw and shoot with Nergal for a day. Next day, Bartek met with me and took me to Bialystock. He introduced me to the band and I was immersed in these ancient Schema Monks traditions. The aesthetic of the Schema Monks is unparalleled. It has a very ancient, wicked sort of feel to it.

Poland is a very Roman Catholic place. How do the Schema monks fit into the Catholic Church?

In the 1300’s, these monasteries were transformed into Christian establishments. The Schema monks are focused on death. The ossuary is a very integral part of their religion and their practices; there is a constant reminder of mortality and that your body goes to the earth. It’s based on very pagan ideals that got tucked into the imagery and messages of the monasteries because they are always in nature. The point of the monasteries is to sort of commune with nature. Christianity came around and added its flair to things, but the general sentiment has been there for much longer.

I wonder if it’s similar to Santeria in the Caribbean where they disguised their true beliefs behind Christian iconography?

That’s a possibility because these guys don’t look like any other Christians that I’ve ever seen. It’s more like the worship of Mary, goddess worship really; Mother Earth, returning to nature and communing with animals. It’s a very different focus than what Catholicism usually focuses on.

Traditionally, the Judeo-Christan philosophy is very male-dominated and patriarchal. Do the Schema monks break from this tradition as well?

Monasteries are traditionally all men, but there are a lot of Schema nun monasteries as well.

Have you seen the Schema monk imagery anywhere else?

When I got back from shooting Batushka, I discovered this zine called “Death to the World” form the 90’s. It has an incredible Schema monk aesthetic. Justin Marler was a founding member of the band Sleep, who after their first few recordings decided to leave society for a little while and found a Schema monk monastery in Alaska.  He went to this retreat and he became indoctrinated into this whole Schema belief system and got heavily involved with them .

He started this zine called “Death to the World” which is basically a punk rock way to disseminate information about the Schema monks in a way that contextualizes it in modern times and the worship of nature and the core themes and values of the Schema monk traditions. He started showing up at punk shows wearing the Schema monk robes and would hand out zines.