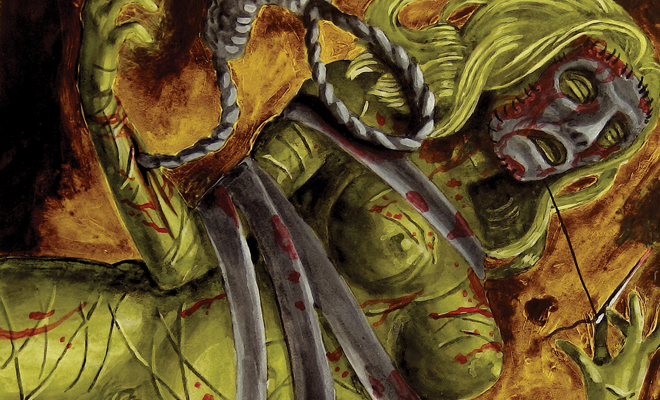 The warm hum of guitars with whispering voices tickle your ears. A repeating scream feels like it’s being thrown from the back of a cave, right into your open mouthed face. The cracking pop of the snare is perfect. The production is perfect. I can’t even begin to tell you what an amazing producer and musician Sanford Parker is; but I’m sure you already know that and expected greatness. Charlie Fell’s lyrics and vocals are in top form. You can just feel the confidence, and yet, the despair and frustration. The ending of “Body Choke” is one of my favorite musical patterns ever created. I still can’t get it out of my head. Bill Bumgardner’s drumming really shines. Next, the self-titled track “Death Mask” is punishing and will leave your neck sore in the morning. I really admire Andrew Markuszewski’s creativity, skill and determination as a musician. Combined with Ken Sorceron, this line-up is fierce. This song made me say, “Oh shit.” Well, I guess almost every song gave me the same reaction, but this one really made me smile and raise an eyebrow. Also, there’s fewer things more fun than screaming, “Death Maye-yaye-yaye-yaye-yask!”

“Possession Prayer” has unexpected nuances and a change of style that I love. For example, filtered voices that bounce from your left ear to right ear, digital layers that bring to mind Godflesh and a mass sonic landscape of noise that rises and fades like a dying star. This song could be the soundtrack to a movie that was a combination of Halloween and Blade Runner. If these guys made a whole album of songs like this, I’d be stoked. Hell, if they made a whole album of polkas I’d probably buy it, because their imagination and capability of raising the bar for all things heavy is truly something to revere.

Then “You Will Gag For The Fix” gives you a chance to calm down, and I feel is like the metaphorical eye of the storm. You’ve just seen houses torn to shreds, people flung into the sky and you know you’re about to see that cow fly by again. This is a really calm and relaxing piece that provides a momentary false sense of security.

Soon, a slow groove kicks in and then those infamous Dylan O’Toole vocals shred you. For brevity’s sake, “Negative Birth” and the rest of the album are great! “Death Mask” is everything I hoped for and more. It’s a buffet of abrasive grime and grit that peels the skin off your teeth and has you in line for another helping. These guys get it. This is what metal is all about. Perfectly crafted darkness that constantly pushes the envelope and all that you perceive as heavy. I have no doubt that this will be on many Best Of 2014 lists, but it will top mine. It’s been an extremely enjoyable listen that I’m going to visit every day until the next album. Pre-order this now from the mighty Profound Lore Records.