Photographer and anthropologist Massimo Branca first met Catalina in 2013 when she was 17 years old.

“Her large, black eyes seemed to become more mysterious the longer I looked at them,” he said. “It took me a lot to understand just how much she had been through in her short life.” Catalina, 17 years old. After being abandoned at birth, she grew up in an orphanage, then lived on the street and in Bucharest’s tunnels since age 12.

At the time, Catalina was living with a group of homeless people in, around, and under the Gara de Nord train station in Bucharest, Romania. She was left in the hospital at birth, raised in an orphanage until age six, then was reunited with her family only to run away at age 12. At 13 she started using intravenous drugs.

Branca photographed Catalina’s life as part of a larger project called “Inside Outside Under Bucharest,” which documents the people who live in the tunnels under the city. Hot, humid, and cramped, the tunnels were part of former Romanian dictator Nicolae Ceausescu’s plan to centrally heat the city. Now, they are home to multiple generations of street children and adults who access them via small craters in the ground. During winter, up to 40 people occupied the tunnel to stay warm, living together in a space of only a few square meters.

Branca and his friend Igor Marchesan first gained access to the tunnels in July 2013, after receiving permission from the de facto leader—a man who goes by the name of Bruce Lee—who controls all the ins and outs of tunnel life, including food and electricity. Branca had to convince Lee that they weren’t out to produce a quick exposé, but rather wanted to study the group’s social relationships from an anthropological perspective.

“I want people to understand what happens in street life and to be more tolerant and open, in case they accidentally meet these people—or meet homeless people anywhere,” said Branca. “I want to enable the audience to imagine what underground life is like, without their eyes being clouded by pity, judgment, or fear.” Boredom is common in the tunnels, with few available activities apart from using drugs. Although she started using drugs at age 13, Catalina also liked to write. Washed dishes and a copy of Leonardo da VinciÕs painting ÒThe Last SupperÓ are seen in the tunnel. The tunnels inhabitants use generators to produce electricity for lights, fans, stereos, refrigerators and television.

According to Branca, most of the tunnel residents suffer from tuberculosis, hepatitis, or HIV, and are addicted to drugs including heroin, mephedrone, and Aurolac—a silver paint they inhale from plastic bags. He says most of the people end up in the tunnels because of a lack of a stable home life—many are former orphans, people exiled from their families after contracting HIV, or folks who ran away from poverty or abuse. Catalina and Bruce Lee (center) are seen during a blackout. Before the arrival of Bruce Lee, the de-facto leader of the tunnels, the tunnels were only lit by candle.

Branca says that while at first glance the environment can appear shocking to a casual observer, he doesn’t want viewers to be shocked by his work. Instead, he wants people to feel compassion and understanding for his subjects. He wants viewers to understand how the tunnel dwellers came to be there, and that people like Catalina are worthy of empathy, compassion, and love.

“I think shocking images would make an observer feel more distant from these people, and my aim is exactly the opposite,” he said. “I want to make the audience understand that they could be in the same situation, and I would like people who see my pictures to change their behavior toward these kinds of issues.” Catalina used to smile with caution and a little shame, because a couple of years earlier she had lost her front teeth. For awhile Catalina tried to stay off drugs. During this period she ate and slept most of the time, trying to recover and find relief from her pain.

Despite being an anthropological observer, Branca says he still tried to help Catalina, even while documenting her life.

In January 2014 she passed out after inhaling fumes from a faulty generator and badly burned her leg on one of the tunnel’s heating pipes. Branca took her to the hospital, and later to a safe house, where she stayed off drugs for a few weeks and swore to him she would quit for good. But she begged him to take her back to the tunnels, and shortly afterwards she began using drugs again.

“I was a human being, and was trying to think of some way to help her. I felt really close to her—like she was something between a sister and a daughter to me,” Branca said. “I knew she wasn’t in good health, but a lot of other people living in the tunnel were in worse condition. She was quite independent, and I didn’t think about the possibility of her dying.” But on May 28, 2014, one month after she turned 18, Catalina died. The official cause was listed as cardiopulmonary arrest—but unofficially, it was from AIDS and an infection at a drug injection site that traveled to her brain.

Branca was in Italy when he heard the news. He rushed to Romania for her funeral—mostly paid for by her street family. Catalina died on May 28, 2014, one month after she turned 18. She had HIV, and suffered an infection in an injection site that spread to her brain. Her street family paid most of the expenses for her funeral. Her boyfriend Santo (bottom right) asked to be buried near her. He is also HIV positive.

“Many say that these people could have a different kind of life if they choose—get a job and have stability,” says Branca. “But they don’t consider that after many months or years closed to other people, they consider each other a family.”

Massimo Branca is an anthropologist and photographer living in Italy and Romania. He is a member of Collettivo Fotosocial, an Italian association of documentary photographers that uses visual storytelling to produce positive social change.

His project “Under the Surface” recently received a Magnum 30 Under 30 award for documentary photography. He is currently working on a project following Catalina’s birth family, documenting the many hardships they are facing in life.

You can view more of his images on his website.

In this article:Bucharest, Massimo Branca, Romania 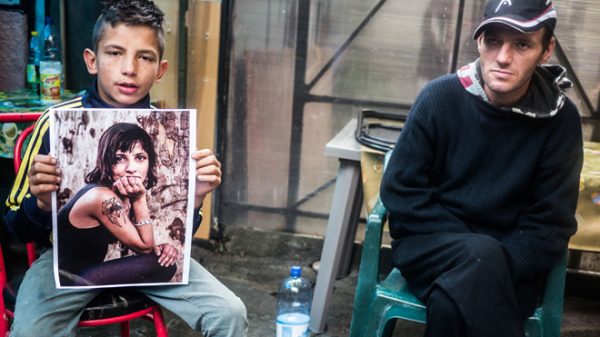 via Channel4 Deep beneath the streets of Romania’s capital, a living hell exists, write Paraic O’Brien and filmmaker Jim Wickens.. The last time we...