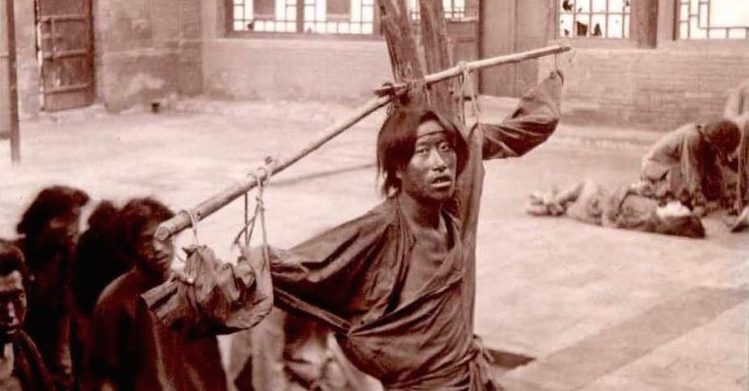 These photos of the Boxer Rebellion (1899 – 1901) are fucking brutal!!! Boxer rebels and criminals were put to death in view of the public in a very bloody way with no mercy. These acts of brutality were done as a warning to others not to cross the state. A prisoner languishes in a small wooden crate.
Notice his long fingers An executioner photographed in 1900 This prisoner in Hankow, China wears a ‘cangue’ (a device for public humiliation and corporal punishment) around his neck as well as an ankle chain. This portable “stock”, or “pillory” was called a Cangue by the Westerners living in China, and a Mu Jia by the Chinese, themselves. A submissive prisoner awaits a fatal blow in the rain while the other man averts his gaze. He has been executed by decapitation The decapitated body with the head in the executioner’s hands Chinese prepare to decapitate a Boxer Chief. Behind him a few onlookers have taken position The executioner proudly holds up his sword after the deed is done. Note the children in the background The decaying heads of two executed criminals hang as a gruesome public reminder. A Slow Death In Old China A bound and strung prisoner before the court in old China