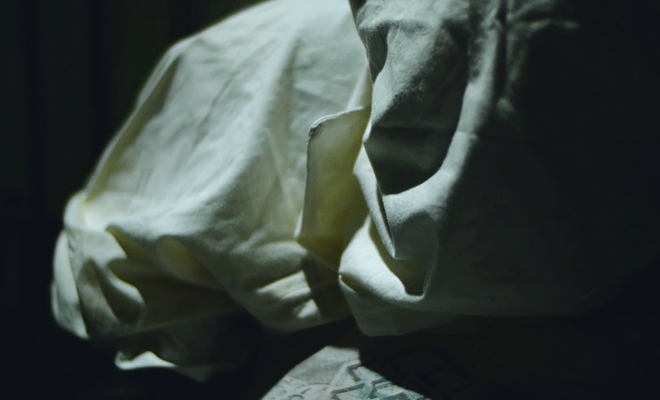 Today we’re stoked to bring you the premiere of the finale of Disappearance In A Minor Role, the film series from Australia’s DUMBSAINT, Part I: Gabrielle. DUMBSAINT directed the three films Part III: Celeste, Part II: Sara and Part I: Gabrielle, eerie and haunting tales of three women who become embroiled in murder when they seek to swap lives with another person. The life you want is not the life you get. The soundtrack by DUMBSAINT is gorgeous, and is being released in a limited run via Grimoire Cassette Cvlture – pre-order here (AU) and here (Worldwide)! Watch Part I: Gabrielle below! Watch the films in reverse order for the full effect…

Four women become involved with a mysterious organisation that purports to connect them with acting roles they can truly “disappear” into. The short film series focuses on three of these aspiring actresses – Gabrielle, Sara and Celeste – as their stories diverge and realign, looking at the dramatic ways in which each of their lives are altered by this strange experience. As the women experiment with their new characters and fight to escape old bonds, we learn more about the enigmatic company and gradually discover just how far it will go in order to maintain authenticity. Disappearance In A Minor Role is a three-part film series about reinventions and reprisals. A story of luck, loose ends and the sinister underside of ambition.

In this article:Australia, dumbsaint, Short Film