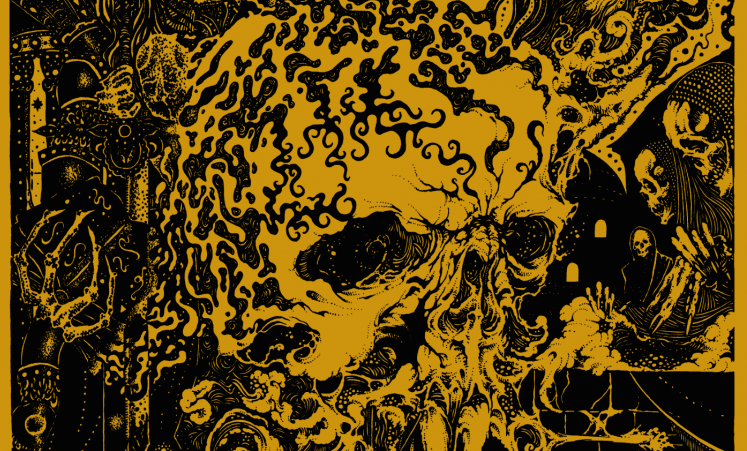 “Death’s Fuming Passage” introduces this onslaught with raw-throated bellows surfacing from the murky depths and further punctuated by thunderous crashing drums and full-speed, aggressive riffs. Although the sound production could be improved, Surging Throng of Evil’s Might proves to be a sinister listen from start to finish. It’s a hellish combination of cruel, demon-infested vocals, along with percussive bombardment and frenzied fretwork, all supplied with suitably possessed delivery. What were my thoughts when I first heard the DEAD VOID The Looming Spectre demo tape? I said to myself, unholy triple hell, this band fucking kills, I can’t believe they’re this good! What struck me about them first is how they sounded like nothing I had heard before. With each listen, they dragged me deeper into their murky world of decaying riffs, and I heard something new every time. To call DEAD VOID Death Metal or Doom would not do them justice, because this band is creating their own lane. I am addicted to their lurching, decaying, suffocating melodies that cause an eternal sense of dread. The dual vocals in this band are fucking on point. This is only the beginning for DEAD VOID, and I know for a fact we will be hearing more from them in a major way. The slow moving dirge of the new BOG BODY demo called Through the Burial Bog will make you damn this band is fucking sick!!! On the real I can not get enough of their filthy Death Doom it’s like I am addicted to their brand of addictive sonic gloom. BOG BODY lays downs the kind of murky muddy riffs that blind in a grim fog of death. When I listen to them and close my eyes all I can see is 100,000 of maggots eating away at decaying corpses. I know when I hear a band that is going to make a huge impression on the underground and BOG BODY is one of those bands! CVLT Nation is fucking beyond mayhem to call Through the Burial Bog the demo of the week if not one of the sickest demo’s of the year! As someone who knows the Caligari Records catalogue fairly well, I couldn’t help but have an inkling as I started to dive into Orga’s demo. There was something familiar in their music. The musical approach perhaps, the rawness and thinness of the guitars, their catchiness, the blistering crisp of the vocals, the levels of street-ready aggression.

More than the sound, it was the spirit; that black metal soul mixed in with that hardcore punk fuck-you attitude. Needless to say, all those who have missed Boston warriors Human Bodies may find some comfort here, as Orga, a quartet that hails from Indianapolis, discharge six quick cuts in about 15 minutes. This demo is a FUCKING CLASSIC!!! SIX: YPOKOSMOS Secrets of the Pulse

Anyone who appreciates Demented Audio Torment is going to go ape shit for the new release from YPOKOSMOS. Alright, so a couple of weeks ago, I wrote about this rad death metal band KOMMAND from L.A. When I wrote the feature, I did not know that the band was fronted by Jesse Sanes, the former singer of HOAX!

Abyssal Vacuum’s new EP reveals a distinctive musical vision and “voice”, the three songs offering a conception of atmospheric black metal that manages to be both mesmerizing and strikingly intense. It’s described by the label that’s releasing it as emanations from a deep and cavernous abyss, “like exploring the darkest caves of Earth”, but the experience it creates might also bring to mind the mysteries of the cosmos lurking in a hostile off-world void. Sentient Ruin has a new record ready to burst like a festering wound onto the streets in the form of MISRULE’sForced to Suffer.