This feature originally appeared on The Brvtalist

When the schedule for last  year’s Beyond Fest was released, we were thrilled to see one film in particular on the list. S. Craig Zahler’s Bone Tomahawk is a movie we were tracking for some time and we were ecstatic to see it have a proper screening in Los Angeles. Part western, part horror, Bone Tomahawk is an incredible hybrid, melding two genres that few films in history have been able to get right. Acting as both writer and director, the film is truly Zahler’s vision and creation. After authoring several critically acclaimed novels such as Congregation of Jackals and Mean Business on North Garrison Street, it is no surprise that he was able to pen such a brvtal film. In addition to being a writer and director, Zahler is also an accomplished musician – as a drummer and vocalist in doom metal outfit Realmbuilder, as well as releasing punishing black metal as Charnel Valley.  With such an incredible resume, we knew we had to feature him on The Brvtalist.

Famed illustrator, musician (Lightning Swords of Death, forthcoming Deth Crux) and frequent collaborator Farron Loathing was a very early supporter of this film. We thought it only fitting to connect the two and the result is an incredible interview we are excited to share with you. The two discuss some of Zahler’s influences, details of the film and strange occurrences in the American wild. Please find the Q&A below:

Farron Loathing: You have written several western novels (A Congregation of Jackals, Wraiths of the Broken Land) and scripts (Bone Tomahawk, The Brigands of Rattleborge) that are set within this dusty, desperate world. I could be projecting, but I even sense it in your music. Charnel Valley, the name of your black metal band, could also be an appropriate alternate title for your film, Bone Tomahawk… It’s in your song titles too ( “Brigand”, “Blue Flame Calvary”,  ‘Highwayman”).  I get the feeling that the vikings of your black metal heart are actually cowboys and indians. What is your relationship to the old west?

S. Craig Zahler: I am a fan of music, movies, and books that take you to another place.  Be it heavy metal, black metal, pulp magazines like Adventure and Argosy, the eldritch worlds of Clark Ashton Smith or King Crimson, I enjoy art that takes its participants on a journey.  My interest in westerns developed concurrently with my exploration of them as a writer, though initially, my exploration of the genre came from some dissatisfaction with westerns that I had read and watched, and thus, my first endeavor in this genre (the repeatedly optioned script, The Brigands of Rattleborge) was an attempt to create a western that I had never seen before—a highly idiosyncratic western that had a very broad emotional palette—equal parts adventure, character study, drama, comedy, and horror.  Many “serious” westerns neglect the comedic aspect of this palette or the nastiness of the violence or both, but I feel that these elements are key to creating a richly realized world—whether or not it is realistic or stylized.

FL: There is very little music in this film, most of the time there is none. It truly demonstrates terrific restraint from a director who is also a musician. I felt the minimal soundtrack decision was nearly declared by the script in an early scene when the character, John Brooder ( Matthew Fox ) purchases a tune from the saloon’spiano player when you cut away before the audience could hear the song.

Zhlr: This is a very interesting observation that you’ve made here about this foreshadowing—and actually, this was an unconscious choice on my part.  That scene mainly serves to establish the town, the mood of the town, and John Brooder, but I can see that it hints at the lack of music as well.  I’ve been called uncommonly self-aware by most people who’ve read or watched my material—I can explain every action of every character and wrote up or narrated character histories for any actor who wanted to hear them—and so it’s nice to learn something new about my work from a fresh viewer.  Thanks! FL: That is unless that song is Four Doomed Men Ride Out. That song rolls out with the end credits and it is delightful, a theme if this film has one which you wrote and performed in the style of the period with Jeff Herriott. The minimalist soundtrack is very effective, but did you find the musician side of S Craig Zahler often scratching at the door, or was this approach part of your vision from the start?

Zhlr: One of the main things I liked about the Dogma movement that Lars von Trier spearheaded in the 90s was the idea of getting away from a score.  If the emotional content is in the scene, then it shouldn’t require music to coax emotions from the audience.  If the emotional content isn’t in the scene, then the filmmakers shouldn’t force the idea into the skulls of the viewers with music.  For years, I have had ongoing debates about the clichés of movie music with my friends—including my co-composer Jeff Herriott, who is a tenured music professor and my partner in the band Realmbuilder—and I wanted Bone Tomahawk to have very little music and really focus in on the performers and the details of the world, sonically and visually.  As is, the movie has a little more music than I initially intended, and this is mainly due to some of the exterior locations not being as ominous looking as I had originally envisioned, so I put in some ambient drones to enrich the spaces.

FL: Bone Tomahawk conjures up some of, if not the most brutal Weird West  that the micro-genre has ever yielded. There is a scene in which a Tribal Man briefly explains the circumstances of what they are dealing with to the four doomed men who accept that they have a subhuman cannibal troglodyte problem the same way a rancher might accept that a pack of wolves are praying on livestock.  The reaction of Sheriff Hunt, Chicory, Brooder and O’Dwyer feels legitimate, they just need to deal with it because it has to be done. Does this film succeed where others have failed because it is handled as a horror film (which is not usually the case)?

Zhlr: In truth, I’ve not seen most of the horror westerns to which people compare this movie, so I can’t speak to their success or failure.  I see this movie as a western that just gets weirder and darker than most other westerns.  And stylistically, I treated the movie completely like a character driven western from start to finish.  The violent sequences focus on the central characters, and the style is the same for these moments and the conversational ones early on, so there is no “switch” in presentation and focus, even though what is happening on the screen in the last act is very different from guys discussing corn chowder in the first act. FL: The cast was clearly committed to your script.  As I understand it both Kurt Russell and Richard Jenkins really came through in championing this picture through it’s uphill battle getting made. Could you tell us a little of how they became involved, was Kurt who you had in mind from Bone Tomahawk’s inception?

Zhlr: In early 2012, Peter Sarsgaard read the script and attached himself to play Arthur O’Dwyer.  He is a smart guy and notably picky, and after he praised the script and spoke well of meeting me in person, the movie had a stamp of approval in Hollywood.  His agent represents Kurt Russell, who read the piece, talked to me, and committed shortly thereafter, and Richard Jenkins soon followed.  I’m not sure if there’s any actor in the business who is as highly regarded as Mr. Jenkins…and for good reason.  When I write, I don’t think of actors, except in a couple of instances years ago when I was working on a piece with an actor already involved.  Jenkins was my first choice for Chicory and Russell was way up there for Sheriff Hunt.

FL: Some National Park Rangers, when asked off the record about the great number of bizarre, unexplained missing persons cases that occur within our forests will tell you in a hushed tone that the culprit is indeed wild people or troglodytes that are abducting human beings for reproduction or for food. Have you heard of this theory ?

Zhlr: I have not heard about these events, though they certainly sound compelling.  My co-composer and Realmbuilder bandmate Jeff Herriott and I were once stalked by a crazy “naturalist” in the woods of North Carolina, so I certainly believe that some odd stuff occurs out there in the wild… We would like to thank both S. Craig Zahler and Farron Loathing for this excellent interview. As an added bonus to the feature, Zahler has also provided some of music, book and film recommendations. Bone Tomahawk is now playing in select theaters and is also available via Video on Demand. We highly recommend our readers see this movie.

In this article:bone tomahawk, FARRON Loathing

The word on the street is this might be the MOST BRUTAL DEATH SCENE Of 2015 seen on film. This horrific act of violence and gore...

Check out this off beat mixtape entitled “New Brvtalism No.010” curated by CVLT Nation for one of my favorite sites The Brvtalist. Creating this... 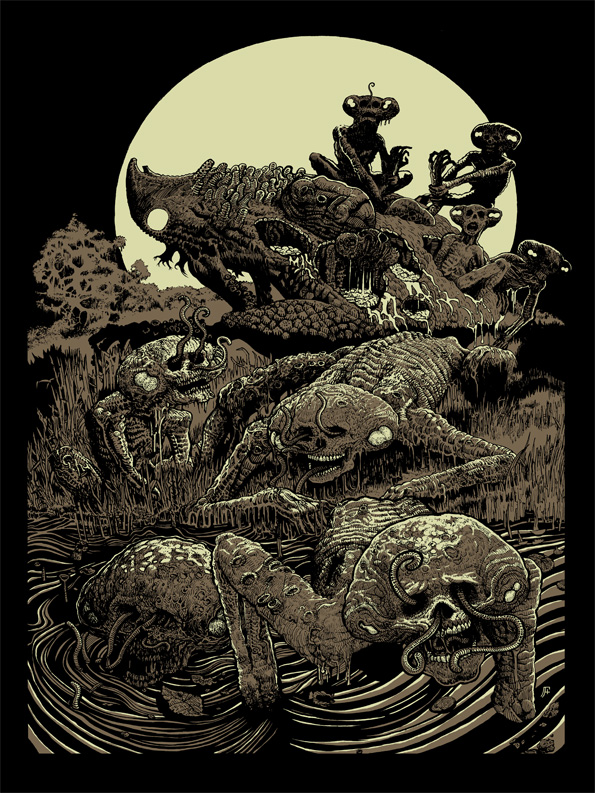