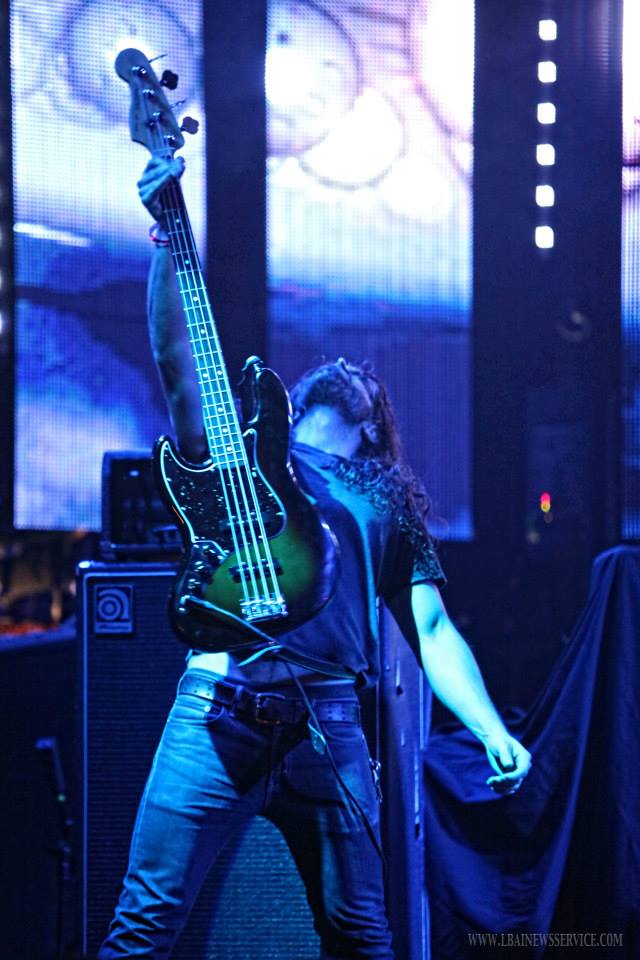 How long did it take to string together the narrative for the “Strange Transmissions…” EP?

Randy: The story for the EP slowly came together as each song was written. I had a rough story arc written out before hand, but the details came as I wrote each song. I tried to treat it from an episode or series type of mind set; pretty much just filling in the gaps as they presented themselves. This story will continue for the next few releases.

You’re given a hefty budget to create a music video for one of your songs – which song, and what would the video look like?

Randy: Well, if the fabled budget is that hefty we would do long movie that had animated videos for each song. Kinda like what Green Jello did. Each tune would have a different style, so it kinda felt like a collection of shorts done by different people. It would flow in a chronological order, so the viewer could get a good idea of the story within the lyrics.

Sally: Something rather abstract and psychedelic, but also slightly disturbing – like when something about reality is slightly off-kilter, but it’s hard to place what. For the medium, I think a combination of animation and live action used in the same scenes. For the song, probably Tragic Orbit or Those of Non-Being.

Scott: If I was to do any music video it would be for The Church Warden Procedure, AND IT WOULD BE METAL AS FOLK! Forest, snow, torches, armor, corpse paint! Metaaaaal! You guys have opened for some diverse bands, from death metal (Morbid Angel, Fleshgod Apocalypse), sludge metal (Eyehategod), and even surf rock (Daikaiju). What is it about Orbweaver that crosses over these different genres, and what is it like unleashing the Orbweaver sound on unsuspecting crowds?

Randy: Honestly I’m not too sure about that. When we are writing we do incorporate a lot of other influences besides metal, but at the end of the day we are still quite metal. I’d like to think that promoters, and concert attendees in general are more open minded and more inclined to enjoy a show with a varied line up, I know I do. As far as unleashing our sound on the unsuspecting crowds – it’s my favorite type of live situation, I love that feeling of “you fuckers have no idea what’s coming”.

Sally: It’s always fun to see how people will react, especially when we’re really out of place on a lineup. It surprises me that for the most part people seem to get into it, which is very positive and encouraging, especially when you’re expecting to clear the room faster than a guy named Johnny Two-Hats.

For the gear heads – Randy, Sally, and Jason: what is your favorite or “signature” effect or piece of gear that you could not live without and is essential to your sound?

Randy: Wow….really hard for me to narrow it down to one…..so I have to cheat and pick two. First would be my ProCo RAT, I never turn that pedal off…and I can get everything from a nice clean boost (how I use it mostly), to thick fuzz. Second would be the Electro Harmonix Frequency Analyzer. It’s a crazy ring modulator and I use it pretty heavily. That said…it would be really hard for me to live without a phaser and delay as well….I get bored easily…and I like trying to make my guitar sound like anything but a guitar.

Sally: That’s a tough question because I’m very attached to my rig… I recently acquired an Orange OR100, which I love, and has ended my quest for ‘The Tone’ (for the time being anyway). Also my delay, vibrato and phaser are the pedals I rely on the most. But I think overall I would have to say my PRS Custom 22 – especially because it has a tremolo, which I love to use. It’s also a killer sounding, versatile guitar, and I would be very upset if I had to play a show without it. (And it’s also gold and shiny… )

Jason: There are two pedals that I have on all of the the time, though not anything too crazy in terms of sound. The first is my MXR micro amp. I run it a little weird because it is actually first in my chain that goes into the fx loop of my amp, but it is always on and adds this tasty harmonic boost, sorta fills in the sound. The second is my EHX bass big muff, also on all the time. It adds that lightly overdriven tone that I have found to be perfect for Orbweaver. It’s set really mellow, with the drive low and the volume high, to add a little drive a la Geddy Lee but also to boost the signal to compensate for the 40ft cable I use. You could say the same about my micro amp in terms of boost as well, because with the fx loop cables, the front of amp cables, and all the pedals there is probably 80-90ft of cable in my rig! One pedal that I think has become essential for the “strange sounds” we make is the Digitech whammy. I use it to do these weird high octave sweeps as well as low sub bass drive. Super fun and has strangely become a real go to pedal. If you had the power to revoke one musician’s ability to create music, who would it be?

Randy: Well, I would never want to end the creative life of an artist; I will say that I absolutely hate Jimmy Page. I think he is one of the most overrated and sloppy players out there, and a lot of people could have done what he did if they were given all the money and drugs one could ever want. His notes are just like nails on a chalkboard to my ears. Fuck Led Zeppelin.

Scott – you love to eat, if you could only eat ONE food for 30 days straight, what would it be?

Scott: Sushi, if I was radiation proof. Probably Alfredo… Spaghetti…pizza… WHY ONLY ONE!? ALFREDO!

Randy – you’re granted one super-human ability, what would it be and why?

Sally – if you were a lady wrestler, what would your name and signature move be?

Sally: Well I used to do ‘sports-fighting’ and Ninjutsu so I guess you could say I was a lady wrestler. For sports-fighting, which was essentially MMA, we had to pick names for a competition once, and mine was ‘Dallas Halford’. Anyway, for a signature move, I would make some kind of Tarzan-like entrance, you know, come swinging into the ring, then back flip off the top rope, landing with my fist on the mat, so it blows everyone within a 10 mile radius away Thor-style…

Jason – you’re stranded in the woods, fighting off a bear for dear life – what is your epic battle song?

Jason: SO MANY ANSWERS RUNNING THROUGH MY BRAIN!!! Something super obvious is like ‘Hung Drawn and Quartered’ by High on Fire, it was on the Surrounded by Thieves album, which was the first High on Fire album I bought. Super heavy epic kill a warlord type stuff. PERFECT!! Hilariously though, when thinking about this question I thought of the contrast between the violence of this insane situation I would be put into, and something really mellow.That being said, something like Mono’s ‘The Flames Beyond the Cold Mountain,’ which is like 15 minutes long and super mellow in the beginning, then crescendos into this epic super-layered, delay and reverb-drenched guitar wall of sound. Tastefully epic, almost like it was made for a movie soundtrack anyway. I love stuff like that. The music is like a soundtrack to a movie that was never made. Ten words or less: your thoughts on…
Steven Spielberg

Randy: The man is a god.

Jason: If only I could see him live. Golf.

Jason: Don’t get it. Make my own fate.

R: My hero. On a musical, political, and human level. Perfection.

J: No one’s opinion matter, buy your own. Coffee.

Jason: Ahead of his time. Epic solo brah.

Randy: Lord of all valves and tone. Final question: why do you create music?

Sally: It is one of the most active and rewarding creative outlets…and there are so many facets, you can get as involved as you want to.

Jason: It’s the only thing I have ever done that doesn’t make me feel like a complete hack and failure. I suck at almost everything, but I seem to not suck that bad at playing this instrument. I still wake up everyday and think to myself, “man I suck at this thing, I should just quit” and more often than not I look at myself, my playing, and think “why do I even try”. But the feeling I get playing with good friends, no matter if its just a fun jam or something serious, that fun glow after the fact, is all worth it. It might be the same song played night after night, or some knock around jam nobody will ever hear, it’s all the same. It’s just a lot of fun, no matter how crappy I play, and I guess that’s the point of it all right, to have fun.