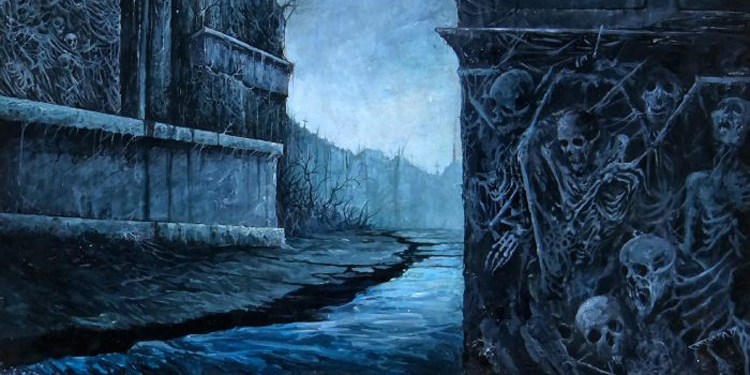 Temple Nightside, a Dark Descent Records alum, has just hopped onto Iron Bonehead Productions’ roster of bands and dropped what has to be their most potent effort to-date, the blackened doom-tinged ritual excursion entitled The Hecatomb.

The Hecatomb sounds a bit like early Encoffination with occasional tremolo riffs scattered about. Dark, eerie, and obscure, The Hecatomb is clearly Temple Nightside’s magnum opus, and mainstream fans will expectedly scratch their heads at a listen to this record, because clearly, obscure ritual blackened doom art such as this only makes sense to fans of the underground. The swirling blackened riffs and hoarse whispers on The Hecatomb sound perfect for vinyl records – and it doesn’t sound bad in digital format, either.

The pace is funeral doom-slow on most sections, although the band occasionally blast to add nuance. Still, Temple Nightside has heard its true calling with this visionary full-length album. The band is in top form here, and has clearly seen the veil of darkness fall upon their helicon of inspiration. The production shoves everything back, seemingly. Even at low volumes, the hoarse whispers resound from a dark chasm, and the guitars aren’t irritatingly set too high in the mix as to drown out all instruments.

Like a hecatomb of vast proportions, the sound emanating from the speakers after you hit the play button sends you plummeting into darkness. Similar to Void Meditation Cult, only slightly clearer and more enjoyable, Temple Nightside’s The Hecatomb is the jugular in blackened doom. This may be the next phase for underground bands tired of repeating the same elements found in the circa second wave black metal template. France brought forth orthodox black metal and progressive tendencies. Iceland brought forth dissonance. Let Iron Bonehead Productions newly-reborne stalwarts Temple Nightside and Dark Descent Records signee Vanhelgd usher in a new darkness – blackened doom has become my dichotomy – my drug of choice, my poison.

Relentless in a way that shuns savagery, The Hecatomb sounds much more subdued. Convincing however for suffocating atmosphere and pervasive aesthetics, you will listen to this album repeatedly without much inhibition. No task is difficult and laborious under the weight of wondrous inspiration. Temple Nightside is on a path that many bands will be doomed to attempt mimicry, else carve its name in the history of underground music for its authenticity, its willful severance from all tributary music before it.

Now in my end-of-year list so far, Temple Nightside is firmly on my radar. Rejoice metallers who choose wisely, for nevermore have we been given greater reason to rejoice!