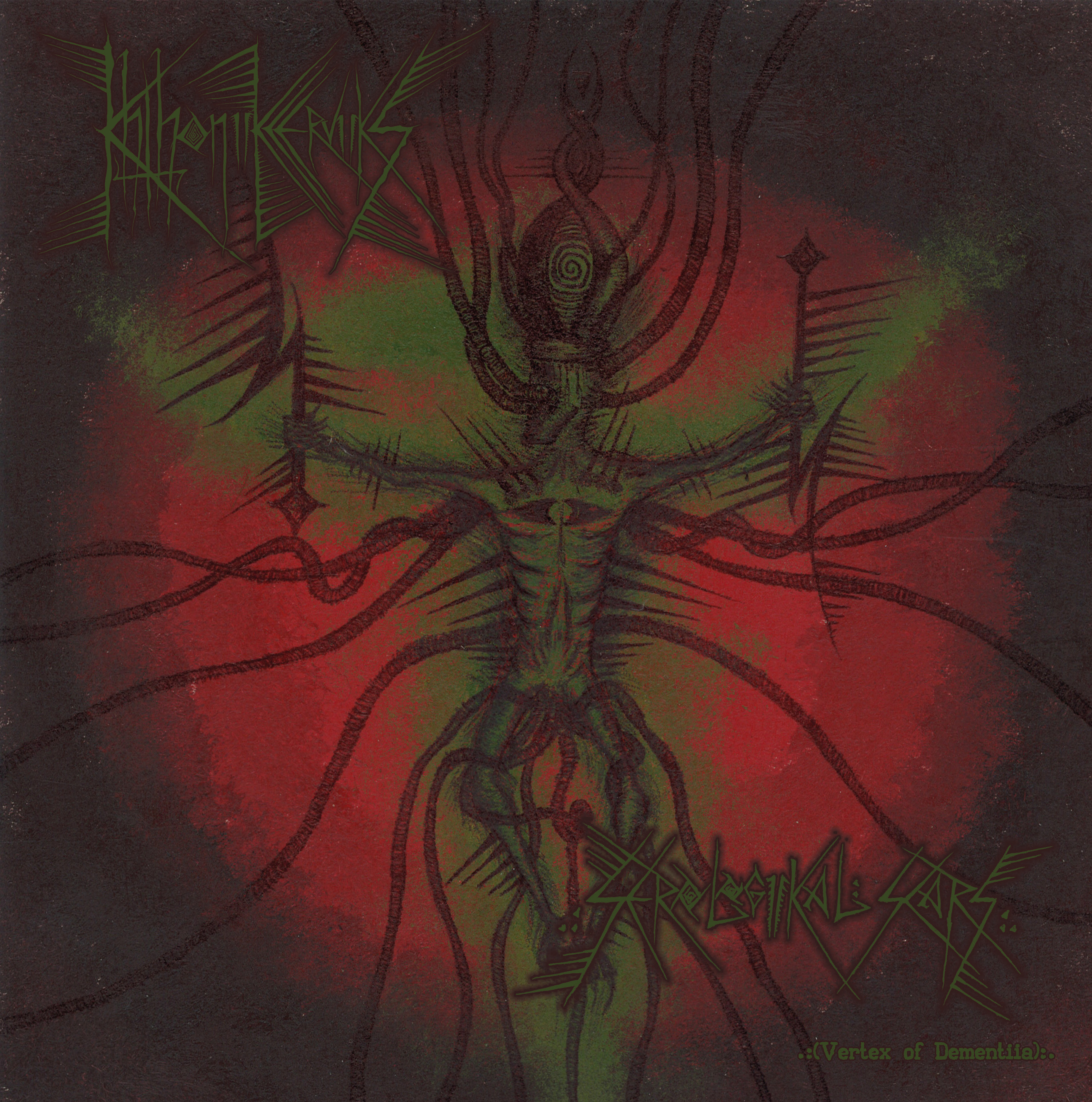 Bands don’t have to play intensely melodic, structured music to win over underground fans. While it’s true that underground metal is typically known for violent, frantic, frenetic play, the performances on tap must be just as stellar as it is nuanced – breaking barriers, defying stereotypes, and all while producing music with the aesthetic values that mainstream bands are mistakenly known for. There may be no greater example of this statement than Iron Bonehead Productions’ Khthoniik Cerviiks and their debut full-length album, SeroLogiikal Scars (Vertex of Dementia).
Khthoniik Cerviiks throws out any presumptions of what metal should sound like – or even more so, what underground metal should sound like.

The nuts and bolts of this beast may be confusing to the uninitiated listener. Then again, obscure records that feature intriguing concepts and lyrical themes can be just as fascinating as they are confusing. Don’t know what to make of Khthoniik Cerviiks’ strange song titles and ideas? Just enjoy the music. It often comes down to a simple and benign endeavor to listen to music intently and feel whatever said music invokes in your soul. Like Bruce Lee says, “Don’t think. Feel.” This statement applies to my admiration of Khthoniik Cerviiks.

Fact is, SeroLogiikal Scars can be a difficult listen. The songs are epic in runtime, lasting up to nine minutes on one occasion, and never shorter than over four minutes at the very least. Khthoniik Cerviiks might be one of the most original bands in the underground. I can certainly state that the bulk of the riffs and arrangements on here belong in interstellar space; they are one of a kind. The riffs aren’t borrowed, and there’s nothing remotely typical on here. That quality lends it a tendency towards obscurity, but the riffs don’t sound anti-melodic one bit. There’s a use of dynamics in songwriting and structure. It just isn’t on par with what many bands like to hack for the sake of familiarity. It’s safe to say that Khthoniik Cerviiks writes music for the Khthoniik Cerviiks fan. It doesn’t matter to these guys what flies off the shelves at Target. These guys play music to please themselves, and if you’re worth your salt, you’ll know its one hundred percent pure kvlt. While it’s true that the compositions crawl on more than two legs, much like a spider inhabiting your brain, the music does have a tendency to spread itself throughout your consciousness after repeat listens. You’ll hear rung notes, but you won’t call this black metal. You’ll hear strange, mercurial lead sections, but you won’t align this record with seventies psychedelia, despite the sense that the band is incorporating this aesthetic. The music is so convoluted and multi-dimensional that one genre tag will fail to describe the music justly. It’s not progressive, either. It isn’t melodic, in the typical sense. It’s primitive, but space-aged at the same time. It’s fucked up, so enjoy the ride.

The only thing worth saying accurately about this record is that it’s a fun, albeit difficult, listen. Give this a spin or two – better yet, give it more than that, and SeroLogiikal Scars will reward the patient listener with its very authentic delivery. Like something at home in a lab cage or a radioactive dumpsite, Khthoniik Cerviiks’ SeroLogiikal Scars is exhilarating music, and if you’re jaded like the typical Cvlt Nation maniac, that notion is worth it’s weight in gold.