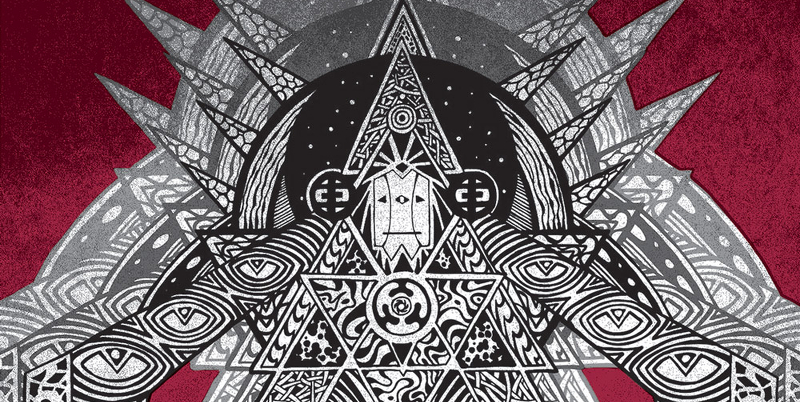 1999 seems like millennia ago. That was the year the “space mammoth” was conceived in the quiet hill town of Tortona, Piedmont, Northern Italy. Little did anyone know that from such a small, placid and unsuspecting place could rise one of the heaviest, loudest, most crushing and mighty doom bands to ever stride the earth. A true mammoth. A true beast of crushing aural devastation. One of those bands who has redefined the concept of “heavy” and built an immense legacy on top of that. Ecate is the Italian mammoth-god UFOMMAMMUT’s seventh (yes we will repeat that again, SEVENTH) colossal, flawless and immense album. The ninth statement in a row of this band’s immense and almost impossible to believe power and superiority. Not much has changed since the band’s harrowing beginnings with Godlike Snake. Poia, Vita and Urlo have not changed much of their sound, but they have refined it, fine-tuned it and tweaked it to almost atom-splitting perfection, turning their sonic beast into something so well-oiled, efficient, thought-out, pure and infallible that, at this point, matching or even thinking of rivaling Ufommammut‘s heaviness and devastation standards has become virtually impossible and basically a delusion.

We want to state something bold, and that many people will have arguments about after hearing Ecate. We have Yob on this side of the globe as the #1 doom band, and Ufomammut on the other, with the Italian crushers retaining that dominant position in Europe, hands down, no questions asked. Essentially, Ufommammut are one of the, if not THE, best doom metal bands in the world right now, and as you listen to Ecate the reason why will be immediately apparent. First of all, how the fuck do you make SEVEN (repeating that also – fucking SEVEN!) flawless and timeless doom meal albums in a row in fifteen years without a glitch or even the slightest error or decrease in quality? That’s fucking unbelievable if you think about it. These three doom sorcerers keep busting out one crushing masterpiece of towering doom after another, with the most apparent ease and thoughtlessness, as if they are just on fucking auto-pilot. How do you do that? How do you bust out a flawless full-length album every two years for fifteen years in a row without the slightest drawback or decrease in inspiration? Mysteries of the mammoth I guess…. Regardless, with Ecate, Ufomammut pick up from where the Oro double album had left us. A sea of synths landlocked in a colossal hyper-vault of electronics and noise are the ecosystem where some of the most bestial, devastating, crushing and god-like riffs reign unchallenged. Seriously, when Ufomammut kick off their now legendary buildups and bring the tension to an almost collapsing and imploding critical mass, and then unleash everything, the shockwaves travel for miles and pulverize everything in their wake. The riffs become an out of control maelstrom of aural devastation that rips across the earth like massive and unstoppable destructive tidal waves. Urlo’s delay and reverb-drenched screams are like the bellow of a beast trapped within a nuclear meltdown and trying to break loose from a humungous core of smoldering molten radioactivity. His baselines are a telluric and absolutely incinerating rumble of destruction, and Vita’s drumming is like the pumping and boiling explosions you would find in the lava well of a volcano that’s about to fucking let all hell lose and discharge a million cubic meters of molten rock in a split second.

And then, for the love of god almighty, and then, there are Poia’s guitar riffs. Holy fuck, essentially the sound of a universe collapsing. Of a star committing suicide in an almost mythological nuclear fission of heaviness. Seriously, these riffs have the heaviness of all the universe’s matter landing on your little tiny skull from a thousand miles above. And then right when you think you can not steep anymore heaviness, any more riffs, any more sheer volume into the ears of a poor common mortal human being, and when you think that they have absorbed all the universe’s available energy and matter and literally stuffed your ear ducts with it to the point that your skull is about to disintegrate, Ufomammut, unleash the final Daemons and take the load of heaviness the poor listener has to withstand to almost biblical proportions making the whole vault of existence and every perception you ever had about what being heavy means collapse under a firestorm of crushing sonic devastation. Behold the immortal legacy of one of the heaviest bands of all times. Out now of course on none other than the legendary Neurot Recordings.